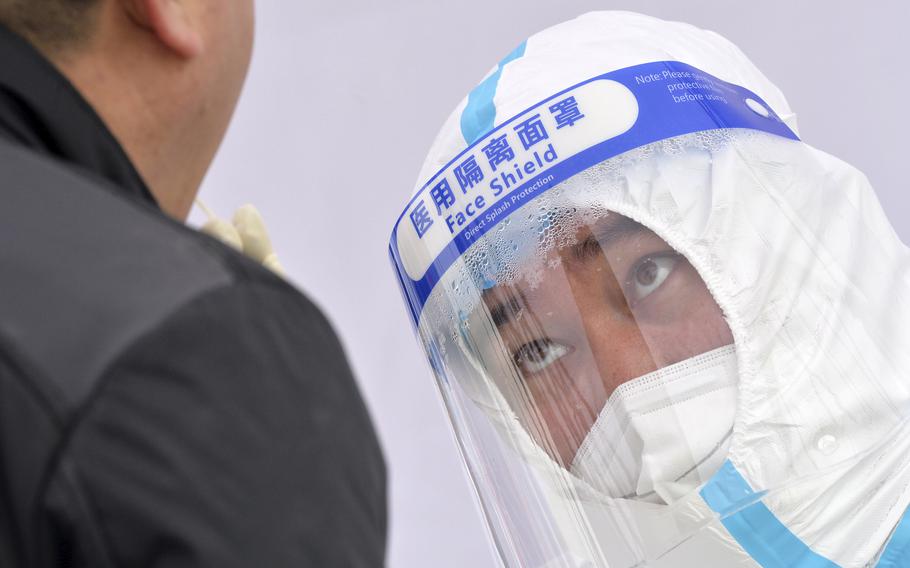 A medical worker’s face shield fogs up as he takes a sample from a resident during a second round of COVID-19 testing in China’s Tianjin Municipality on Wednesday, Jan. 12, 2022. (Chinatopix Via AP)

BEIJING — The northern Chinese city of Tianjin ordered a second round of COVID-19 testing of all 14 million residents Wednesday following the discovery of 97 cases of the omicron variant during initial screenings that began Sunday.

Residents were asked to remain where they are until the results of all the nucleic acid tests are received, the official Xinhua News Agency said.

Xinhua said authorities have carried out almost 12 million tests so far, with 7.8 million samples returned. Infections were first reported on Saturday in the city that is only about an hour from Beijing, which is to host the Winter Olympics from Feb. 4.

High-speed rail service and other forms of transportation between the cities have been suspended, leading to some disruptions in supply chains, including for packaged food items sold in convenience stores.

Tianjin's COVID-19 prevention and control office said all who have tested positive in the initial testing round were found to have the omicron variant, of which China has so far only reported a small number of cases. The source of the outbreak is still unknown and many who are spreading the variant may be doing so unwittingly because they show no symptoms.

Also in the north, two college students who traveled earlier this month by train from Tianjin tested positive for the virus Wednesday in the city of Dalian, city officials said. There was no word on what variant they had contracted.

The omicron variant spreads even more easily than other coronavirus strains, and has already become dominant in many countries. It also more easily infects those who are vaccinated or were previously infected by other versions of the virus. However, early studies show omicron is less likely to cause severe illness than the delta variant, and vaccination and a booster still offer strong protection from serious illness, hospitalization and death.

Millions more Chinese are under lockdown in cities under the strict "dynamic zero-case policy" that has allowed China to largely contain major outbreaks, although at considerable cost to local economies.

Hong Kong has closed kindergartens and primary schools after infections were discovered among students, banned flights from the United States and seven other countries and held 2,500 passengers on a cruise ship for coronavirus testing Wednesday as the city attempts to stem the emerging omicron outbreak.

Hong Kong has tightened pandemic-related restrictions in recent days after discovering the omicron variant had spread beyond people arriving from overseas.

In total, China announced 166 new cases of COVID-19 in the 24 hours before Wednesday, including 33 in Tianjin and 118 in Henan province but just eight in the city of Xi'an, home to the famed Terracotta Warrior statues and major industries, where a lockdown was imposed Dec. 23.

Authorities also released news of an inspection to Henan last week by Vice Premier Sun Chunlan, who called for stepped-up measures to prevent the spread of both the delta and omicron variants. COVID-19 has spread to three cities in the province, including Yuzhou, Anyang and the provincial capital Zhengzhou, prompting travel bans and various levels of lockdown.

"It is necessary to do a good job in guaranteeing the living needs of the people in the closed and controlled communities, ensure the basic medical needs of the people during the epidemic period, and ensure that the people's demands can be responded to and resolved in a timely manner," Sun was quoted as saying.

Some Xi'an residents have complained about their inability to obtain food and other daily necessities.

China has sacked or otherwise punished a number of officials for dereliction of duty related to the pandemic response, including failing to prevent new infections. On Wednesday, Anyang authorities cited 61 government departments and 11 officials in violation. Punishments ranged from verbal warnings to dismissal, according to a city government notice.

Ensuring the Olympics are free of any outbreaks is a key concern of the ruling Communist Party. Athletes, officials and journalists are operating in a closed-loop bubble to prevent them from coming into contact with the general public from the time they arrive in Beijing until their departure. If fully vaccinated, they will not have to undergo the standard 21-day quarantine.

In addition, the International Olympic Committee has issued a document advising attendees to avoid crowded places such as bars and restaurants and avoid physical contact with others five days before departing.

Attendees are required to provide two negative PCR tests before they travel and will be tested twice daily while in China.

Participants should "absolutely not let your guard down" even after testing negative, the IOC said.

China has banned fans from outside the country from attending and it appears Beijing plans to distribute only a small number of tickets to carefully selected spectators.

Along with lockdowns, China has used mask mandates and detailed case tracing to restrain major outbreaks.

It has vaccinated nearly 85% of its population, according to Our World in Data. The shots have helped reduce the severity of disease, although Chinese vaccines are considered less effective than those used elsewhere.

China says it currently has 3,476 active COVID-19 cases. The country has reported 4,636 deaths among 104,189 total cases since the virus was first detected in the central Chinese city of Wuhan in late 2019.