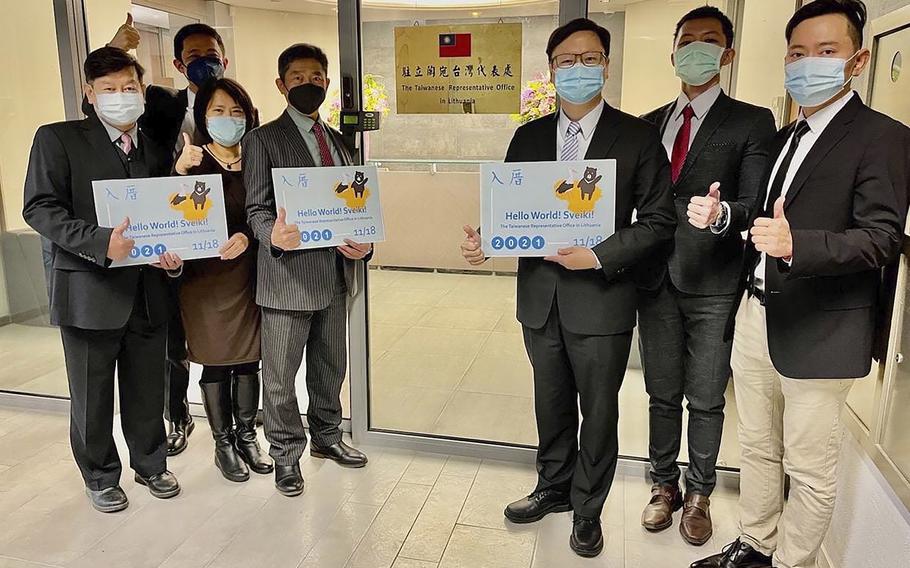 In this file photo released by the Taiwan Ministry of Foreign Affairs, Eric Huang, newly appointed director to the representative office, third from right, poses with other staffers outside the Taiwan Representative Office in Vilinius, Lithuania on Thursday, Nov. 18, 2021. China on Sunday, Nov. 21, reduced its official relations with Lithuania to below ambassador level after Taiwan, the island democracy that Beijing claims as part of its own territory, was allowed to open a representative office in the Baltic nation. (Taiwan Ministry of Foreign Affairs via AP)

BEIJING — China reduced the level of its diplomatic relations with Lithuania to below ambassador level Sunday in retaliation for the Baltic nation allowing Taiwan, the island democracy claimed by Beijing as part of its territory, to open a representative office.

China earlier expelled the Lithuanian ambassador, reflecting its intense sensitivity over the status of Taiwan, which Beijing says has no right to conduct foreign affairs. China also withdrew its own ambassador from Lithuania.

The foreign ministry said relations would be downgraded to the level of charge d'affaires, an embassy's No. 2 official.

Lithuania's move reflects growing interest among governments in expanding ties with Taiwan, a major trader and center for high-tech industry, at a time when Beijing has irritated its neighbors and Western governments with an increasingly assertive foreign and military policy.

Taiwan and the mainland have been ruled separately since 1949 following a civil war.

The foreign ministry accused Lithuania of "undermining Chinese sovereignty and territorial integrity." It called on the Lithuanian government to "correct the mistakes immediately."

Beijing refuses to have official relations with governments that recognize Taiwan as a sovereign country. It has persuaded all but 15 countries, most of them small and poor in Africa and Latin America, to switch recognition to the mainland.

Many governments, including the United States and Japan, have official diplomatic ties with Beijing while maintaining extensive commercial ties with Taiwan. Many maintain relations with the island's democratically elected government through trade offices that serve as informal embassies.

Lithuania broke with diplomatic custom by agreeing that the Taiwanese office in Vilnius would bear the name Taiwan instead of Chinese Taipei, a term used by other countries to avoid offending Beijing.

Lithuania said earlier it plans to open its own representative office in Taiwan.