China warns against 'manipulation' of WHO virus probe 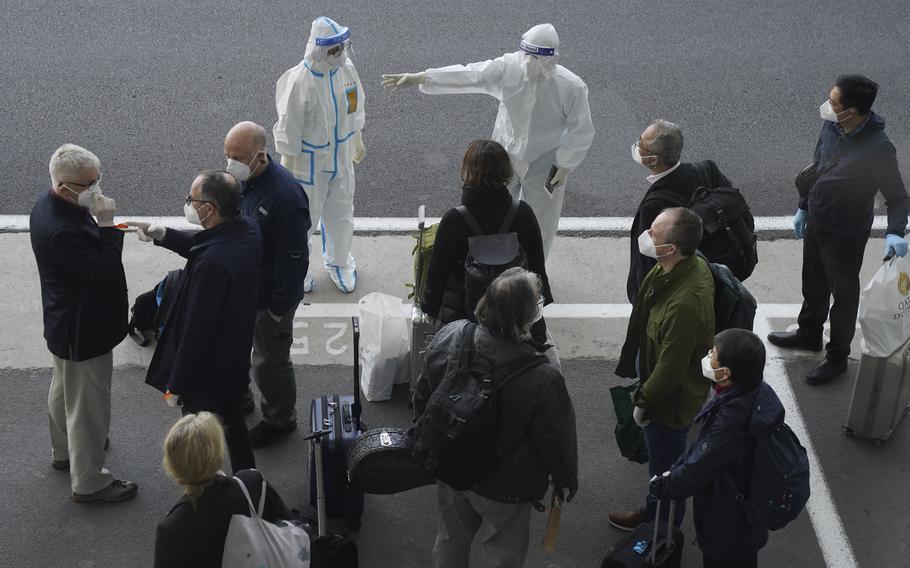 In this Jan. 14, 2021, file photo, a worker in protective coverings directs members of the World Health Organization (WHO) team on their arrival at the airport in Wuhan in central China’s Hubei province. China’s Foreign Ministry on Thursday, Oct. 14, warned against what it called possible “political manipulation” of a renewed probe by the World Health Organization into the origins of the coronavirus, while saying it would support the international body’s efforts. (Ng Han Guan/AP)

BEIJING — China's Foreign Ministry on Thursday warned against what it called possible "political manipulation" of a renewed probe by the World Health Organization into the origins of the coronavirus, while saying it would support the international body's efforts.

The WHO on Wednesday released a proposed list of 25 experts to advise it on next steps in the search for the virus' origins after its earlier efforts were attacked for going too easy on China, where the first human cases were detected in late 2019.

Beijing was accused of withholding raw data on early cases during a visit by a WHO team in February and has since resisted calls for further investigation, saying the U.S. and others were politicizing the matter.

"We hope that all parties concerned, including the WHO secretariat and the advisory group, will effectively uphold an objective and responsible scientific attitude," Zhao told reporters at a daily briefing.

The experts proposed by the U.N. health agency include some who were on the original team that went to the central Chinese city of Wuhan to investigate the origins of COVID-19.

The findings of the original WHO-led team were inconclusive, and the experts released a report concluding it was "extremely unlikely" that the coronavirus leaked from a Wuhan lab, prompting criticism from outside scientists that the theory had not been properly vetted. WHO Director-General Tedros Adhanom Ghebreyesus later acknowledged it had been "premature" to dismiss the lab theory.

Beijing has repeatedly questioned whether the virus did indeed originate in China, and has called for investigations into U.S. military laboratories without providing any solid evidence.

China has largely stamped out cases of local transmission of COVID-19 infections through mask wearing, quarantining and electronic case tracing, along with sometimes draconian measures including lockdowns and mandatory mass testing.