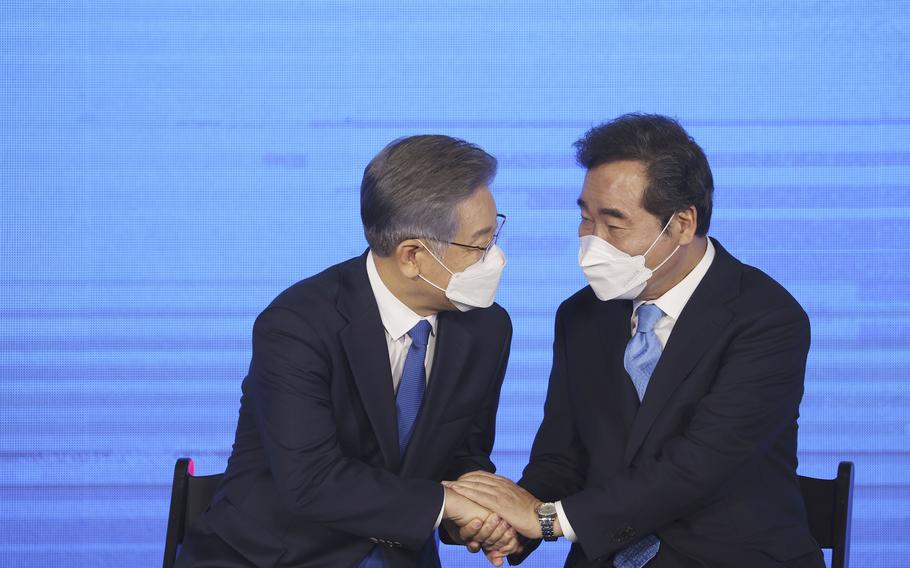 SEOUL, South Korea — South Korea's ruling liberal party on Sunday nominated its candidate for next year's presidential elections, selecting a maverick politician known for his outspoken views who is likely to be the race's front-runner.

Lee Jae-myung's nomination as the Democratic Party presidential candidate comes despite his rivals' efforts to depict him as a dangerous populist and link him to a snowballing real estate scandal.

In his acceptance speech, Lee bowed deeply several times and said he'd want to carry out what he called a public call to "root out unfairness, inequality and corruption" and carry out other sweeping reform steps.

"I'd restrain the excessive desires by the strong and protect the lives of the weak. I'd protect the people's jobs, income and welfare," Lee said.

Party officials announced Lee had collected about 50.3% of all votes cast during the race, defeating three challengers in a Democratic Party primary that ended Sunday.

Lee, 56, is the governor of South Korea's most populous Gyeonggi province that surrounds the capital of Seoul. He is known as a tough-speaking liberal who has built up an image as an anti-establishment figure. He's also well-known for his self-made success story as he worked as a boy laborer at a factory, a time that left him an arm disability before he taught himself law, passed the country's notoriously difficult bar exam and worked as a human rights lawyer.

Before becoming governor in 2018, Lee worked as mayor of Seongnam, a city inside Geyonggi, for eight years. Previously a political outsider, he rose sharply amid public anger over an explosive 2016-17 corruption scandal that eventually led to the ouster of the conservative President Park Geun-hye.

Lee has said that if elected, he would focus on easing South Korea's deep-rooted economic polarization and inequality that he says causes other social problems, as well as hurting South Korea's economic growth.

Some of his actions and campaign pledges have drawn accusations from critics that they are populism-driven ideas. Among them are his provision of COVID-19 relief fund to all Gyeonggi residents, contrary to the central government's decision to give such money to only 88% of the country's population; a promise to adopt a universal basic income to give all citizens at least 1 million won ($840) every year; and a push to not levying toll fees from cars using a bridge in Gyeonggi.

Lee has also faced an escalating political offensive by his opponents over a dubious property development project in Seongnam when he served as mayor there. One former senior city official has been arrested over the scandal. A small asset management firm and its affiliates made massive profits from the project and there are suspicions about possible corruptive links among them, city authorities and other high-profile figures.

Next year's March 9 election will likely be a two-way race between Lee and whoever wins the main conservative People Power Party's nomination in November. Most recent surveys put Lee ahead of either of the two main conservative presidential hopefuls, though some indicated they were in a neck-and-neck competition.

The election is meant to find a successor of current President Moon Jae-in, a Democratic Party member whose single five-year term has been marked by dramatic tensions with North Korea, a worsened conservative-liberal divide at home and varied economic woes.

Those proposals weren't something new and it's unclear if they could be realized. The U.S. has said the sanctions will stay in place unless North Korea takes concrete steps toward denuclearization.