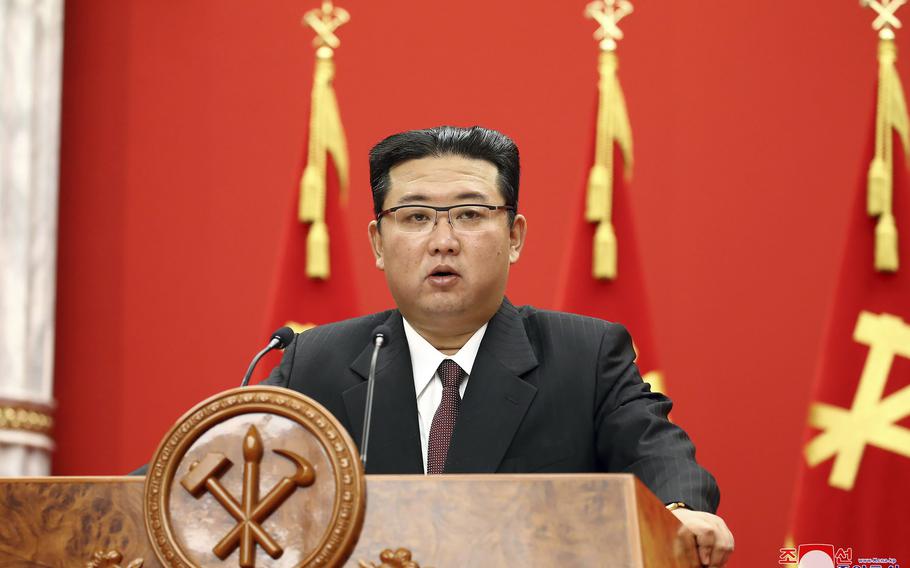 In this photo provided by the North Korean government, North Korean leader Kim Jong Un delivers a speech during an event to celebrate the 76th anniversary of the country’s Workers' Party in Pyongyang, North Korea Sunday, Oct. 10, 2021. Independent journalists were not given access to cover the event depicted in this image distributed by the North Korean government. The content of this image is as provided and cannot be independently verified. Korean language watermark on image as provided by source reads: "KCNA" which is the abbreviation for Korean Central News Agency. (Korean Central News Agency/Korea News Service/AP)

But state media didn't mention any specific comments toward Washington and Seoul while reporting on Kim's speech marking the 76th anniversary of the ruling Workers' Party's founding.

Nuclear negotiations between Washington and Pyongyang have stalled for more than two years over disagreements in exchanging the release of crippling U.S.-led sanctions against North Korea and the North's denuclearization steps.

The country has ramped up its missile testing activity in recent weeks while making conditional peace offers to Seoul, reviving a pattern of pressuring South Korea to get what it wants from the United States.

Pyongyang's official Korean Central News Agency said Kim during his speech on Sunday said his party is determined to achieve the economic goals set during the party's congress in January, when he acknowledged his previous economic plans weren't succeeding and issued new development plans for the next five years.

The agency said Kim confirmed the determination of the party to efficiently carry out the five-year plan to boost "the national economy and solving the people's food, clothing and housing problems."

The KCNA said Kim analyzed the "unprecedented difficulties" facing the North and called for the party's single-minded unity in developing the state economy in face of the "grim situation."

Analysts say Kim is facing perhaps the toughest moment of his near decade in power. He failed to win badly needed sanctions relief in his summitry with then-President Donald Trump in 2018 and 2019, then the coronavirus pandemic caused North Korea to close its borders and unleashed further economic shock after decades of mismanagement and sanctions over Kim's nuclear weapons program.

The World Health Organization said last week some of its COVID-19 medical supplies had arrived at a North Korea port, an indication the North was easing one of the world's strictest pandemic border closures to receive outside help.

Kim has so far rejected the Biden administration's offers to restart dialogue without preconditions, saying that Washington must first abandon its "hostile policy," a term the North mainly uses to refer to sanctions and U.S.-South Korea military exercises.

But the North in recent weeks have also restored communication lines with the South and said it could take further steps to improve bilateral relations if Seoul abandons its "double-dealing attitude" and "hostile viewpoint."

Analysts say North Korea is using the South's desire for inter-Korean engagement to drive a wedge between Washington and Seoul and to pressure the South to extract concessions from the Biden administration on its behalf.