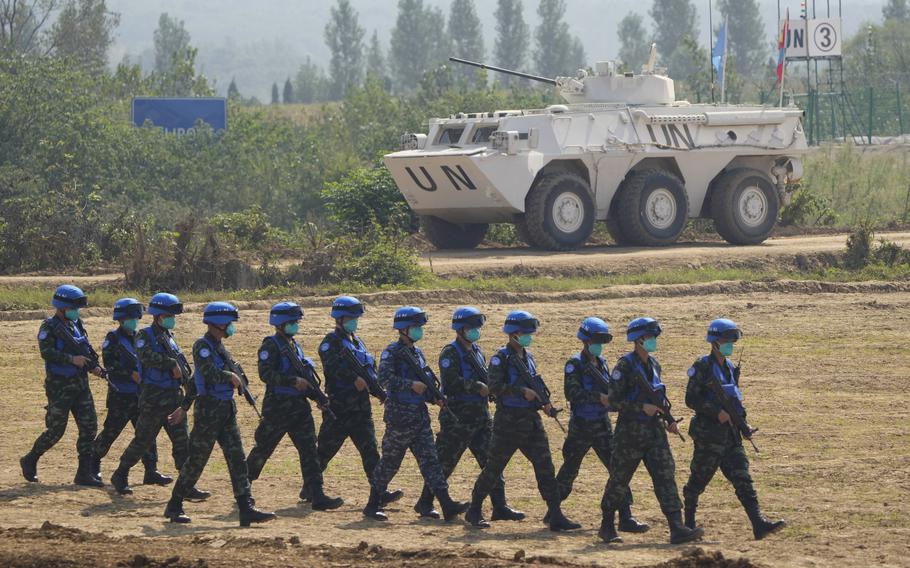 QUESHAN, China — China has emphasized its role in United Nations peacekeeping operations with its hosting of multinational exercises that ended Wednesday.

The 10 day-long drills in the central province of Henan featured around 1,000 troops from China, Mongolia, Pakistan and Thailand.

Chinese weapons, equipment and facilities were in the forefront throughout the exercises, underscoring the country's standing as the largest contributor of peacekeeping forces among the seven permanent members of the U.N. Security Council. China has the world's largest standing military with increasingly sophisticated capabilities to challenge the United States, its main global strategic rival.

In one simulated counterterrorism drill, an explosive-laden vehicle was driven toward a U.N. base while attackers shot at peacekeepers and threw Molotov cocktails. The drill was based on an incident where a Chinese peacekeeping base in Mali came under attack.

China currently has around 2,500 peacekeepers assigned to eight separate missions.

The exercise comes on the 50th anniversary of the recognition of the People's Republic as the representative of China at the United Nations, resulting in the expulsion of Taiwan, which Beijing continues to claim as its own territory to be brought under its control by military force if necessary.

The drills also come at a time of prolonged tensions between China and India over their disputed border and uncertainty over Afghanistan's security after U.S. and foreign forces withdrew from the country in August.

Among the other participants in the exercises, Pakistan is a longtime ally of Beijing, while China in recent years has been courting Thailand through investment and military cooperation. Mongolia is sandwiched between China and Russia and is heavily dependent on its southern neighbor to purchase its natural resources.