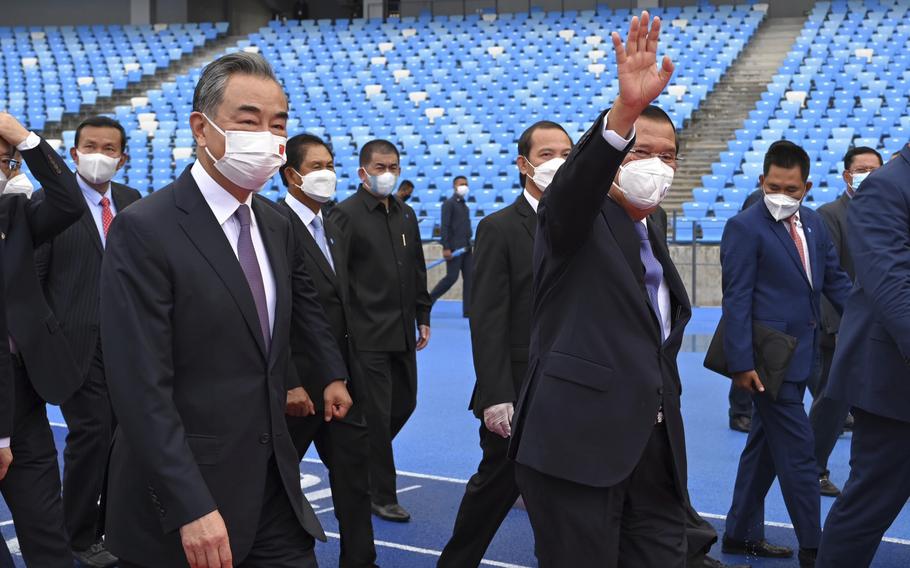 Chinese Foreign Minister Wang Yi, front left, accompanied by Cambodian Prime Minister Hun Sen, front right, walks around during a tour of the Morodok Techo National Stadium as it was handed over to the Cambodian organizing committee of the Southeast Asian Games in Phnom Penh, Cambodia, Sunday, Sept. 12, 2021. Wang is visiting Cambodia, where he met with Hun Sen and other officials to discuss COVID-19 and other regional issues. (Tang Chhin Sothy/Pool via AP)

Wang met with Hun Sen and other officials for bilateral talks on combating COVID-19, trade and investment, education and security issues. Cambodia's foreign ministry said earlier that Wang's meetings on Sunday and Monday also would include discussions of regional and international issues of shared interest.

China is Cambodia's biggest investor and closest political partner whose assistance largely underpins the Southeast Asian nation's economy. Hun Sen did not detail what the aid from Beijing would be used for.

Hun Sen spoke on a live television broadcast in which he praised China for its aid at a handover ceremony for a new 60,000-person capacity stadium built on the outskirts of the capital, Phnom Penh. The Chinese government provided the $160 million funding for the project, Cambodia's state news agency AKP reported Tourism Minister Thong Khon as saying.

"Before, we could not imagine that Cambodia would have such a large stadium here, but China helps make it happen for us," AKP quoted Hun Sen saying at the ceremony. He called the stadium "the fruit of the ironclad Cambodian-Chinese friendship."

Speaking to the press after meeting separately with Cambodian Foreign Minister Prak Sokhonn, Wang made a similar point, saying, "Let Chinese-Cambodian friendship be steadier than iron and stronger than steel."

Hun Sen pointed out other assistance from China for the construction of more than 2,000 kilometers (1,200 miles) of roads and seven big bridges across the Mekong, Tonle Sap and Bassac rivers. He noted as well that vaccines sold and donated by China had helped Cambodia battle the pandemic.

Hun Sen added, however, that Cambodia is not reliant solely on China but makes friends with all the world's countries, and welcomes their aid for development. The U.S. has also donated COVID-19 vaccines to Cambodia.

Washington's relations with Hun Sen's government are frosty, as Beijing's support allows Cambodia to disregard Western concerns about its poor record in human and political rights, and in turn Cambodia generally supports Beijing's geopolitical positions on issues such as its territorial claims in the South China Sea.

In recent months, the U.S. has expressed concern about their ties and urged Cambodia's leaders to maintain an independent and balanced foreign policy that would be in its people's best interests.

The concerns have focused partly on China's construction of new facilities at Ream Naval Base in Cambodia and the potential for its military to have future basing rights there.

Wrapping up a visit to neighboring Vietnam on Saturday, Wang said China planned to donate 3 million vaccine doses to that country, which is under a lockdown to contain a COVID-19 surge.