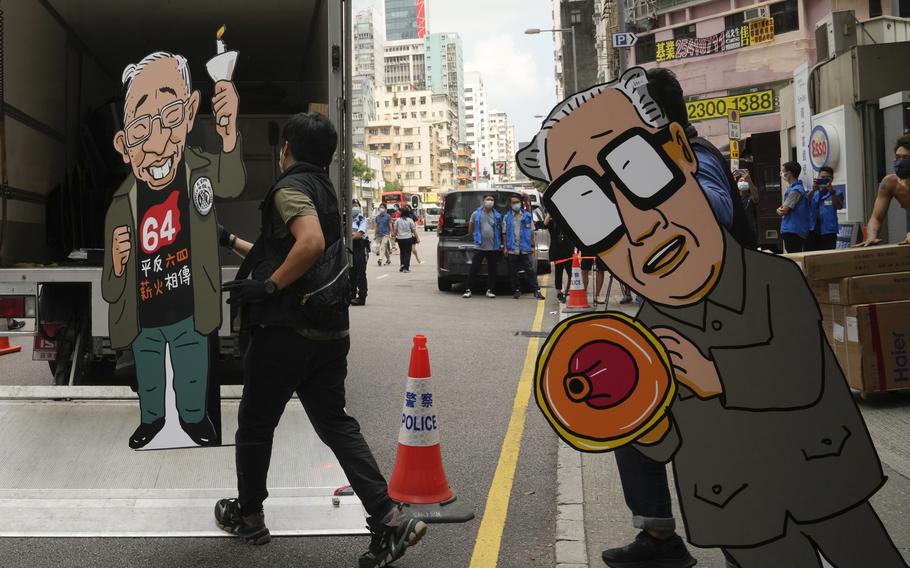 The 12 were charged with participating in the unauthorized assembly in Victoria Park on June 4 last year, when thousands of Hong Kongers turned up to light candles and sing songs despite police warnings that they may be breaking the law. Seven of the 12 were also charged with inciting others to take part in the assembly.

Authorities have banned the vigils for the past two years, citing public health risks due to the pandemic, although critics believe the ban is part of an ongoing crackdown on dissent in the semiautonomous Chinese territory following months of anti-government protests in 2019.

Prior to the ban, the candlelight vigil event held on June 4 every year was attended by massive crowds and was the only large-scale public commemoration on Chinese soil of the 1989 crackdown in Beijing.

Those who pleaded guilty on Thursday include lawyer Albert Ho, former lawmaker Eddie Chu and Figo Chan, a former leader of the Civil Human Rights Front which was known for organizing large-scale pro-democracy rallies in the city.

The 12 are expected to enter mitigation pleas. They face up to five years in prison.

They are part of a larger group of activists who were arrested over the June 4 assembly. Some of them, including jailed Apple Daily founder Jimmy Lai, have pleaded not guilty.

Prominent activist Joshua Wong and three others who were also charged over the June 4 vigil had previously pleaded guilty in April and were given prison sentences of between 4 to 10 months.

Separately, national security police on Thursday raided the closed June 4 museum in Hong Kong, a day after four core members of the Hong Kong Alliance in Support of Patriotic Democratic Movements of China were arrested.

The alliance organizes the annual June 4 vigil and runs the museum each year.

This year's museum was closed three days after it opened to visitors following an investigation by authorities over its lack of appropriate licences. The alliance was later fined 8,000 ($1,000) Hong Kong dollars.

Hong Kong authorities have cracked down on dissent over the past year, after Beijing imposed a sweeping national security law in response to months of anti-government protests in 2019.

Dozens of pro-democracy activists have been arrested and the city has amended electoral laws to increase the number of seats for pro-Beijing legislators while reducing those that are directly elected.

Critics say the national security law, which has been used to arrest more than 100 people, rolls back freedoms promised to the former British colony when it was handed over to China in 1997. Hong Kong had been promised it could maintain freedoms not found on the mainland for 50 years, such as freedom of speech and assembly.