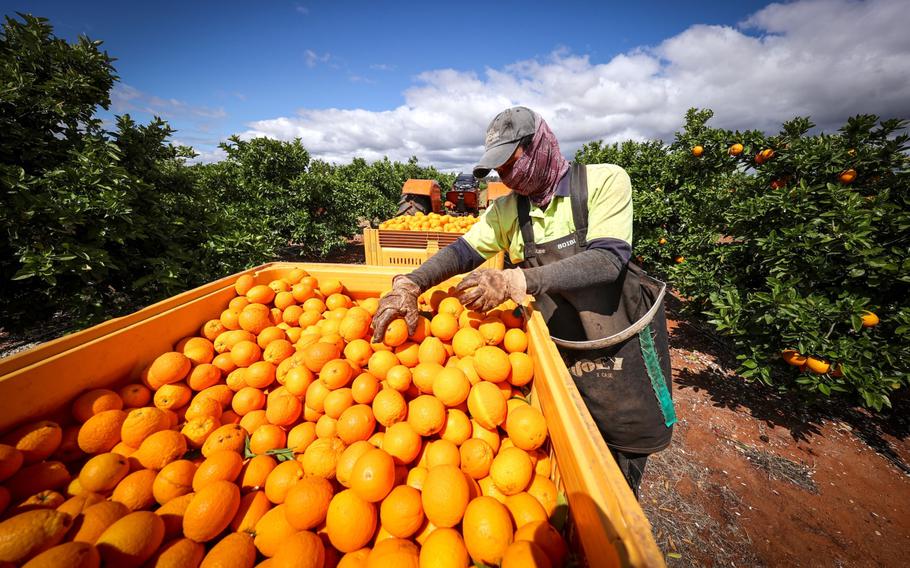 A seasonal worker harvests checks Valencia oranges during a harvest at an orchard near Griffith, New South Wales, Australia, on Oct. 8, 2020. (David Gray/Bloomberg)

With more than half of Australia's population currently in lockdown due to outbreaks of the delta Covid-19 strain, tight rules on movement and state border closures are posing serious challenges for the A$66 billion ($49 billion) agriculture industry for the second year in a row.

Already facing a labor shortage due to border closures to international visitors, further restrictions on inter-state travel will obstruct the flow of contract workers who follow the summer harvest cycle, which is due to start in Queensland before progressing down to Victoria. Industry groups fear that the challenges could derail what is tipped to be another stellar crop this season, with Australia expected to produce 54.8 million tons of winter grains, about a third above the 10-year average to 2020-21.

"A disaster situation will occur if the limited number of harvest workers are stopped from moving back and forth across the border," National Farmers' Federation Chief Executive Tony Mahar said in an August statement.

Australia has long relied on foreign laborers in its agriculture industry to compensate for its shrinking and aging workforce. The federal government has attempted to plug labor gaps over the course of the pandemic by organizing chartered planes to fly workers from Pacific island nations in pilot programs, but the numbers are nowhere near the level needed to fill the estimated monthly shortfall of up to 24,000 this summer, according to Ernst &amp; Young.

Canberra said last month it would start offering agricultural visas to overseas workers over the next three years, but with little information on which partner countries are involved and how the program will work with the current caps on international arrivals it may not be enough to address the immediate shortages.

The government has also attempted to attract backpackers, who must complete at least three months of agricultural work for a two-year working-holiday stay, with the offer of a visa extension on the completion of a longer farm stint. Still, the number of those workers has plunged from 160,000 pre-pandemic to less than 40,000, leaving some crops unsown or left to rot last season.

"Last year, people were planning a long way ahead to procure people to employ, and it was tight," said Michael Whitehead, head of agribusiness research at ANZ Banking Group Ltd. This year, the unpredictability of the delta strain has made it more challenging to do so, he said. The grain, fruit and meat processing sectors would all be affected by the logistical difficulties, he added.

While producers can apply for special permission to cross between some states, the national farming industry group in its statement chided cumbersome bureaucracy and called the situation "state-ism gone mad." Some workers have said that they were turned away at borders despite being in possession of agricultural permits.

The Western Australian government last week spiked a plan to parachute in foreign laborers to assist with the wheat harvest, nixing any hope of relief as the state has doubled down on its hard border stance that bars entry to workers from the rest of the country.

In addition to labor issues, the border rules also make access to heavy-machinery operators more "challenging," Agriculture Minister David Littleproud said Tuesday. Some farmers rely on sharing essential equipment with producers in other states with the southward progression of the harvest.