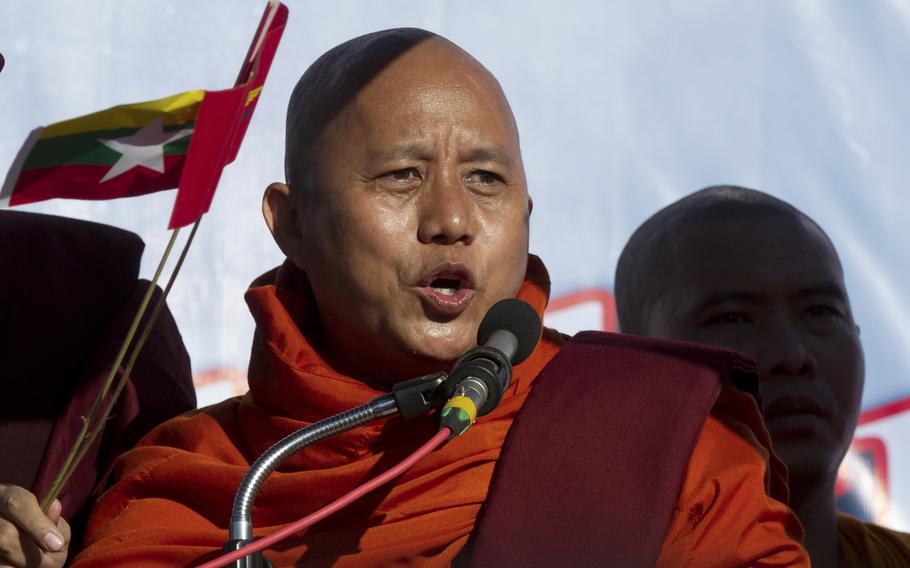 Buddhist monk and anti-Muslim community leader Wirathu speaks during a pro-military rally in front of city hall in Yangon, Myanmar, on Oct. 14, 2018. Wirathu was freed from prison on Monday, Sept. 6, 2021, after charges that he tried to stir up disaffection against Myanmar's previous civilian government were dropped. (Thein Zaw/AP)

BANGKOK — A nationalist Buddhist monk in Myanmar notorious for anti-Muslim remarks was freed from prison on Monday after charges that he tried to stir up disaffection against the country's previous civilian government were dropped.

The monk, Wirathu, became prominent in 2012 after deadly riots broke out between Buddhists and ethnic minority Rohingya Muslims in the western state of Rakhine. He founded a nationalist organization that was accused of inciting violence against Muslims.

Muslims from other ethnic groups and in other areas also faced disrespect and occasional violence after Wirathu and his supporters launched their nationalist campaign. Time Magazine called Wirathu "The Face of Buddhist Terror" in a cover story in 2013.

Wirathu and his supporters were also successful in lobbying for laws making interfaith marriages difficult.

Par Mount Kha, another activist monk and friend of Wirathu, confirmed late Monday that the case had been dropped.

"I am 100% sure that Wirathu has been released. We welcome his release, " he said.

People Media, an online news site, said it had received confirmation of Wirathu's release from Maj. Gen. Zaw Min Tun, a spokesman for the Myanmar military, known as the Tatmadaw.

"The case was closed and he was released this evening. Even though U Wirathu was released, he is still receiving medical treatment at the Tatmadaw Hospital," it quoted Zaw Min Tun as saying.

No reason was given for dropping the case.

Wirathu had turned himself in for arrest last November after being a fugitive from justice since May 2019, when a court issued a warrant for his arrest under under a section of the penal code that criminalizes comments that "bring into hatred or contempt" or "excite disaffection against" the government.

The charge was brought by the Yangon Region government for remarks he made in early May 2019 that included crude insults of Aung San Suu Kyi, who was then Myanmar's leader. Her government was ousted in February this year in a military takeover.

Wirathu was able to build upon widespread prejudice in Buddhist-majority Myanmar against the Rohingya Muslims, who are seen as having immigrated illegally from Bangladesh, even though many of their families have lived in Myanmar for generations.

In 2017, attacks by Rohingya militants on police posts triggered a brutal counterinsurgency campaign by the army that caused more than 700,000 Rohingya villagers to flee across the border to Bangladesh for safety.

The Rohingya Muslims' plight put the spotlight on Wirathu, who was accused of hate speech, and Facebook shuttered his account in 2018, However, he managed to stay on other social networks and gave speeches around the country. The National Monks Council banned him from giving public talks for a year, but its ruling was not tightly enforced.

Wirathu had a large following and was seen as maintaining close links with the military. But in a video released on social media while he was in prison, he complained bitterly about his treatment by the military-installed government.