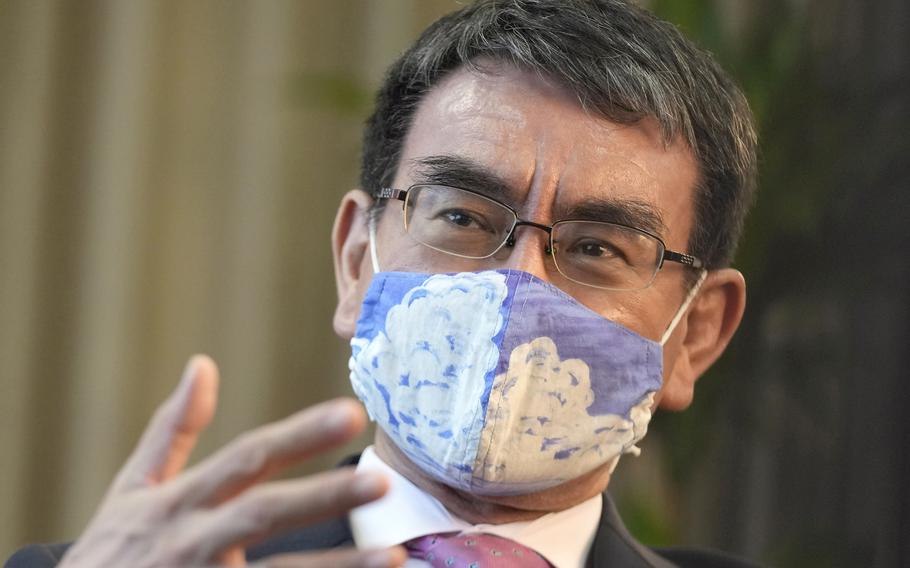 In this July 28, 2021, file photo, Taro Kono, Japan's minister in charge of a huge vaccination campaign, speaks during an interview with The Associated Press at his office in Tokyo. (Eugene Hoshiko/AP)

TOKYO — Japan's outspoken Cabinet minister in charge of vaccinations, Taro Kono, has the most popular support to become the country's next leader, according to opinion polls released Monday, as potential candidates jockey to replace outgoing Prime Minister Yoshihide Suga.

Kono, 58, a graduate of Georgetown University and fluent in English, is a rarity in Japanese politics, which are dominated by elderly men. He has many fans among younger people, with whom he communicates via social media. He has also served as foreign and defense ministers.

Suga's sudden announcement on Friday that he will not seek another term as head of the governing Liberal Democratic Party in a Sept. 29 vote opened the way for an array of candidates.

The head of the governing party is normally elected prime minister by parliament because the party and its coalition partner hold a majority of seats.

Suga, who took office a year ago, has faced nosediving popularity over his government's coronavirus response, which many saw as slow and limited, and for insisting on hosting the Olympics despite widespread opposition over health concerns.

Having a fresh leader is important for the Liberal Democrats ahead of an upcoming general election that must be held by late November.

A telephone survey conducted on Sept. 4-5 and released Monday by Japan's Kyodo News agency showed nearly 32% of the 1,071 respondents said they preferred Kono as the next prime minister, with former Defense Minister Shigeru Ishiba trailing with 27%. Former Foreign Minister Fumio Kishida, the only person who has announced their candidacy, was third with 19%.

Both Kono and Ishiba have expressed interest in running but have not announced their candidacies as they continue to seek support from party lawmakers.

Two other weekend surveys, by the Yomiuri newspaper and TBS television, also ranked the top three potential contenders in the same order.

Public popularity does not directly affect the choice of prime minister, who is elected by parliament from candidates presented by various parties.

Former Gender Equality Minister Seiko Noda, who is also seeking to be the first female prime minister, was nearly tied with Takaichi with about 3-4% support in the surveys.