Seaman Apprentice Ryan Sawyer Mays poses for a photo that accompanied a social media post he made on June 14, 2020, that read, “I love the smell of napalm in the morning.” (Naval Criminal Investigative Service)

The sailor charged with setting the fire and destroying the USS Bonhomme Richard last summer had previously dropped out of training to become a Navy SEAL after only five days and held a grudge against the service, according to an affidavit filed by an investigator seeking a search warrant in the case.

Seaman Apprentice Ryan Sawyer Mays, 20, became an arson suspect soon after the blaze was extinguished four days after it began on July 12, 2020, while the amphibious assault ship was docked in San Diego, according to the 33-page affidavit filed in U.S. District Court in the Southern District of California on Sept. 3, 2020.

In the affidavit, which had remained sealed until Tuesday, investigators asked the court for access to Mays’ social media accounts.

The Navy announced last week that a sailor had been charged with setting the fire but did not identify him.

The contents of the affidavit were first reported by the Daily Beast and San Diego Union-Tribune.

The Bonhomme Richard was undergoing maintenance at Naval Base San Diego when the blaze seared through 11 of the ship’s 14 decks, destroyed its forward mast and damaged the superstructure before being put out. The Navy said in December the ship would be scrapped.

Investigators with the Bureau of Alcohol, Tobacco, Firearms, and Explosives determined soon after the blaze was extinguished that it had originated below deck in a section called Lower V, where they found a container that had held a petroleum distillate believed to have been used to start the fire.

Agents with the Naval Criminal Investigative Service began questioning sailors associated with Lower V, and those interviews led quickly to suspicion of Mays. 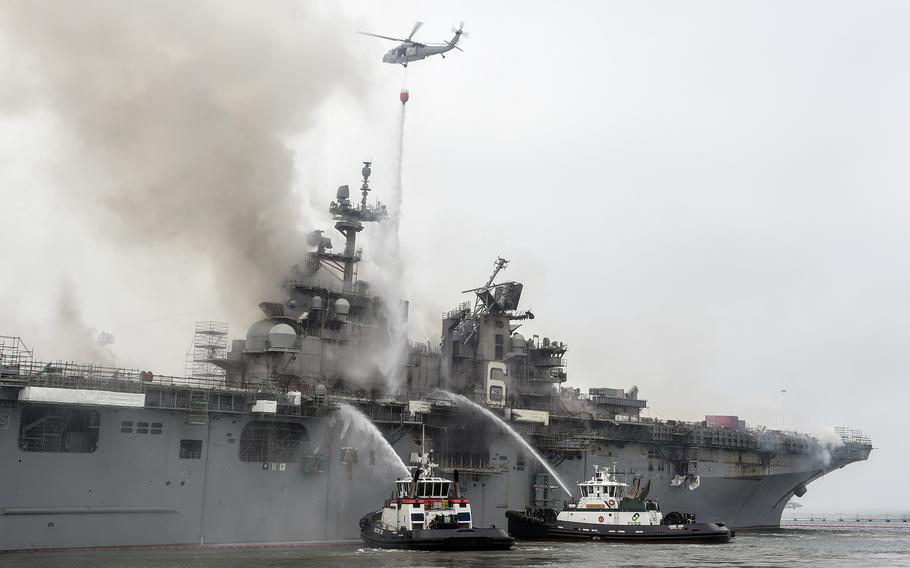 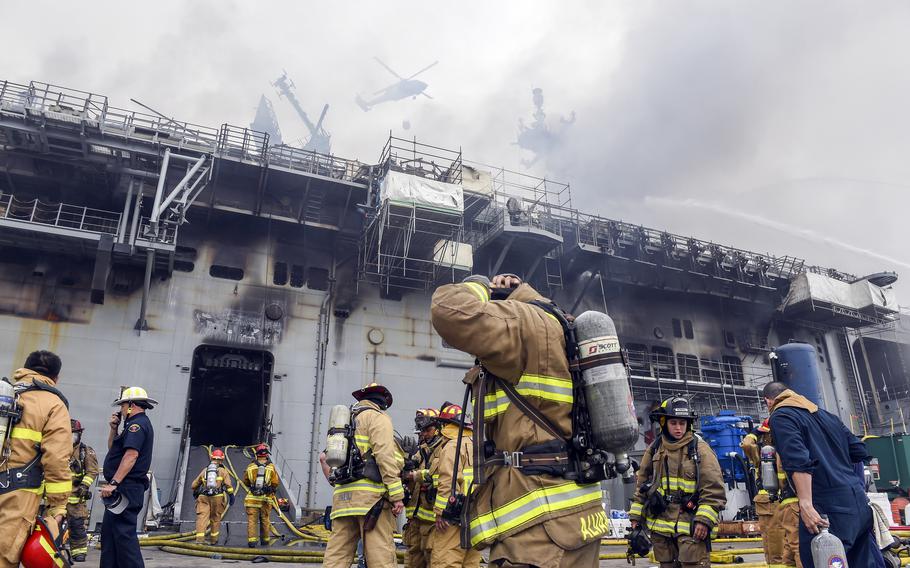 They found a social media message posted publicly by Mays about a month before the fire that said, “I love the smell of napalm in the morning” — a quote from the 1979 film “Apocalypse Now.”

Seaman Kenji Velasco told agents he had seen a masked sailor carrying a bucket down to Lower V, and that he saw no other person go down there before the fire started. Velasco later told them he believed that sailor was Mays.

Command Master Chief Jose Hernandez told NCIS agents that Mays was “a person who showed disdain towards authority and the U.S. Navy,” the affidavit said.

Mays joined the Navy in 2019 with an eye toward the advanced electronics computer fields, the affidavit said. He changed his mind on that career choice at some point and began Basic Underwater Demolition/SEAL training in October 2019.

He dropped out after five days and was reassigned to the Bonhomme Richard as an “undesignated Seaman,” the affidavit said.

“According to Navy leadership, the morale and behavior of sailors who had aspired to become a SEAL, and then find themselves serving in a more traditional role on a Navy ship, are frequently very challenging,” the affidavit said.

NCIS agents interviewed Mays over a 10-hour period on Aug. 20.

“He maintained his innocence as to being the cause of the fire throughout the entire interview,” the affidavit said. “At one point, after being told that he had been identified as having descended the ramp to the Lower V, before the fire started, Mays stated that he was being setup.”

Agents arrested him at the end of the interview and took him to the brig at Marine Corps Air Station Miramar, the affidavit said.