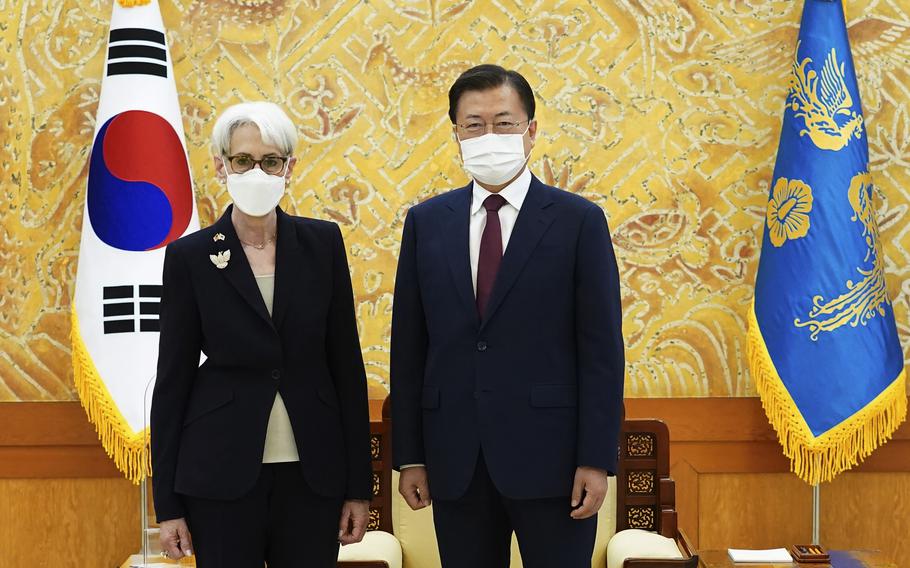 SEOUL, South Korea — Top U.S. and South Korean officials agreed Thursday to try to convince North Korea to return to talks on its nuclear program, which Pyongyang has insisted it won't do in protest of what it calls U.S. hostility.

U.S. Deputy Secretary of State Wendy Sherman was in Seoul as part of her regional tour that will take her to China this weekend. She'll be the highest-ranking U.S. official to visit China since President Joe Biden took office in January.

On Thursday, she met South Korean Foreign Minister Chung Eui-yong for talks on North Korea, the military alliance between Seoul and Washington and other regional issues.

The two decided to continue close consultations to get North Korea to return to talks and agreed dialogue is essential to the complete denuclearization and permanent peace on the Korean Peninsula, Chung's ministry said in a statement.

During her separate meeting with President Moon Jae-in later Thursday, Sherman said she hopes North Korea will soon respond to a U.S. offer for dialogue. She said she wants to have in-depth talks on North Korea with Chinese officials when she visits the northeastern Chinese city of Tianjin on Sunday, Moon's office said.

U.S.-led diplomacy aimed at stripping North Korea of its nuclear program in return for economic and political benefits has been stalled for about 2 ½ years. A major sticking point is North Korea's calls for the United States to abandon policy Pyongyang considers hostile — an apparent reference to punishing U.S.-led sanctions imposed over its past nuclear and missile tests.

Last month, Kim's influential sister, Kim Yo Jong, dismissed prospects for a restart of the nuclear diplomacy, saying U.S. expectations of talks would "plunge them into a greater disappointment." After her statement, Kim Jong Un's foreign minister said North Korea wasn't even considering the possibility of any contact with the Americans, noting it "would get us nowhere, only taking up precious time."

The blunt back-to-back statements have dampened hopes that were raised when Kim said North Korea was ready for both dialogue and confrontation — though more for confrontation.

Some experts say North Korea will likely find the urgent need to return to talks if its current pandemic-related economic difficulties further worsen.

Also during Thursday's meeting, Chung asked Sherman to strive to bolster the South Korean-U.S. alliance. Sherman responded she would do so, saying the alliance is key to peace, security and prosperity in the Indo-Pacific region and Northeast Asia, according to the statement.