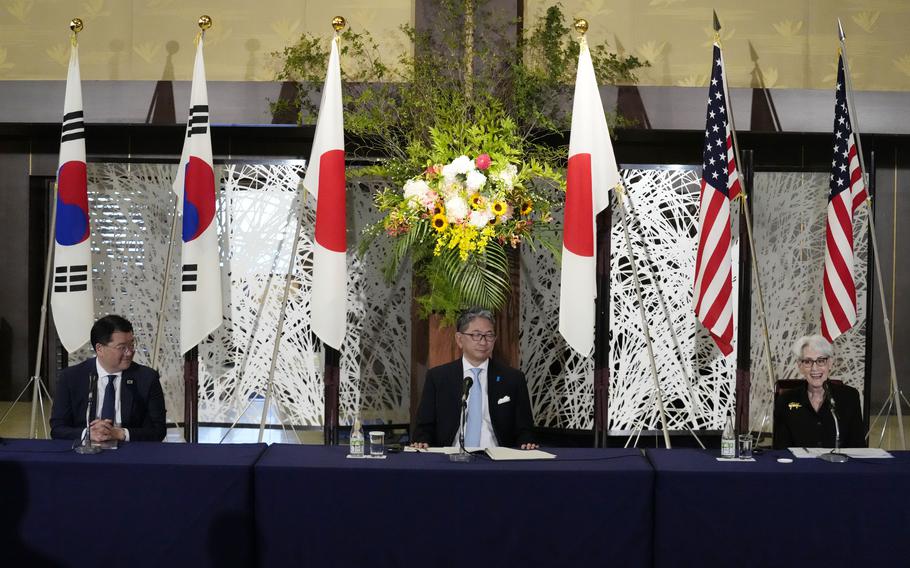 TOKYO — The United States, Japan and South Korea on Wednesday reaffirmed their commitment to work together on North Korea's denuclearization and other regional threats but made no progress in bringing closer together the two U.S. allies.

The officials reaffirmed the importance of respecting international law, including maintaining freedom of navigation and overflight in the South China Sea, and opposed any unilateral attempts to change the status quo in the East China Sea and in the Taiwan Strait.

"When countries take actions that run counter to the United States' interests or that threaten our partners and allies, we will not let those challenges go unanswered," Sherman said.

The United States and Japan have raised concern about China pressing its claims to contested areas in the South China Sea and the Japanese-controlled Senkaku islands, which China also claims and calls Diaoyu.

"It is important for the international community to unite and raise its voice against (China's) unilateral attempts to change the status quo by force, and I hope for cooperation among the three countries," Mori said.

South Korea's Choi stayed away from the China issue at a joint news conference on Wednesday and stressed the importance of maintaining dialogue with North Korea.

Worsening relations between Washington and Beijing have raised worries in Seoul that it would become squeezed between its main security ally and biggest trading partner.

Choi repeatedly welcomed the significance of holding the trilateral talks and said he hoped hold them regularly for "close communication" among the three countries.

Japan and South Korea have been trying to improve ties since U.S. President Joe Biden took office calling for stronger three-way cooperation in the face of the North Korean nuclear threats and challenges posed by China.

There has been little improvement.

Mori and Choi remained apart on issues dating back to Japan's colonization of the Korean Peninsula and atrocities committed before and during World War II, and only agreed to continue talks.

Choi repeated his country's position that the issues would not be solved unless Japan changes its position.

Earlier this week, President Moon Jae-in scrapped a plan to visit Tokyo for Friday's opening of the Olympics and meet with Prime Minister Yoshihide Suga.

China's relations with South Korea have been rocky at times, but Beijing's main priority has been to sow divisions among the three allies. Like South Korea, parts of China were subject to Japanese occupation during the first half of the 20th century and the government seeks to keep those memories fresh among the younger generation.

In Beijing, Foreign Ministry spokesperson Zhao Lijian accused the U.S. and Japan of "clinging to the Cold War mentality, deliberately engaging in group confrontation and trying to create an anti-China encirclement."

"The U.S. and Japan should immediately stop interfering in China's internal affairs and undermining regional peace and stability," Zhao said at a daily briefing. "China will resolutely defend its sovereignty, security and development interests."