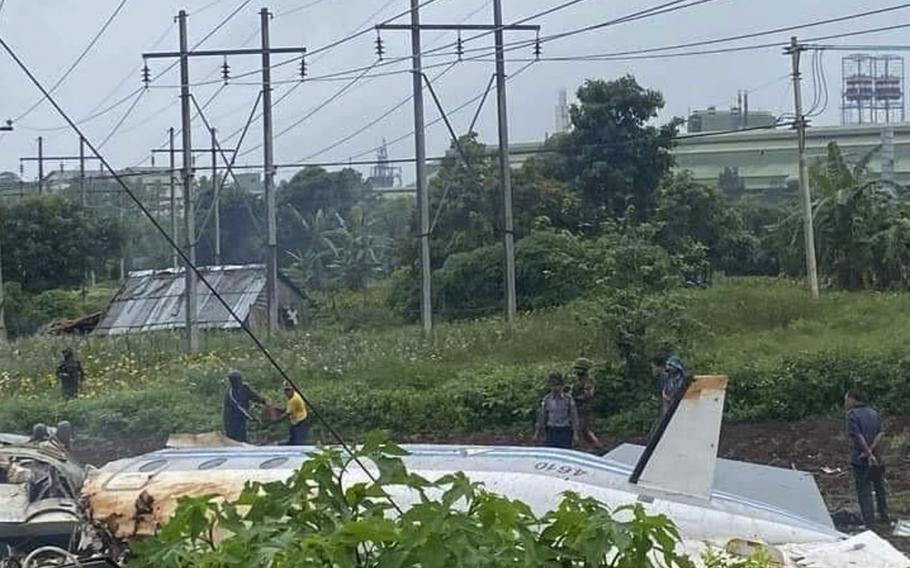 Military and locals stand beside the wreckage of a Myanmar Air Force Beechcraft 1900 that crashed in Pyin Oo Lwin, Mandalay, Myanmar on Thursday June 10, 2021. Twelve of the 14 passengers were killed, according to state media. (Myanmar Ministry of Information via AP)

BANGKOK — A well-known senior Buddhist monk was among at least 12 people who died when a plane belonging to Myanmar's military crashed Thursday in the country's central Mandalay region, state media reported.

Army-run Myawaddy TV said a boy was one of two survivors on the flight from the capital, Naypyitaw, to Pyin Oo Lwin, also known as Maymyo. The other person taken to a hospital was reported to be a member of the military, but several other unconfirmed reports said he later died.

The plane was carrying six military personnel in addition to two monks and six devotees to Pyin Oo Lwin for a ceremony to lay the foundation for a new monastery, the report said.

The senior monk who died was the abbot of Zay Kone Monastery in Pyinmana, a satellite town of Naypyitaw. He was believed to be in his nineties and hosted the head of the country's current ruling junta, Senior Gen. Min Aung Hlaing, for a visit on Feb. 2, the day after the army ousted the country's elected leader, Aung San Suu Kyi, and seized power.

The crash occurred when the plane was making its landing approach to Pyin Oo Lwin's Anisakhan airport, reported Myawaddy TV, which said there was bad weather at the time.

The plane that crashed appeared from photos to be a Beechcraft 1900, a model used by the air force. Five people died in February 2016 when an air force Beechcraft 1900D crashed shortly after takeoff from Naypyitaw.