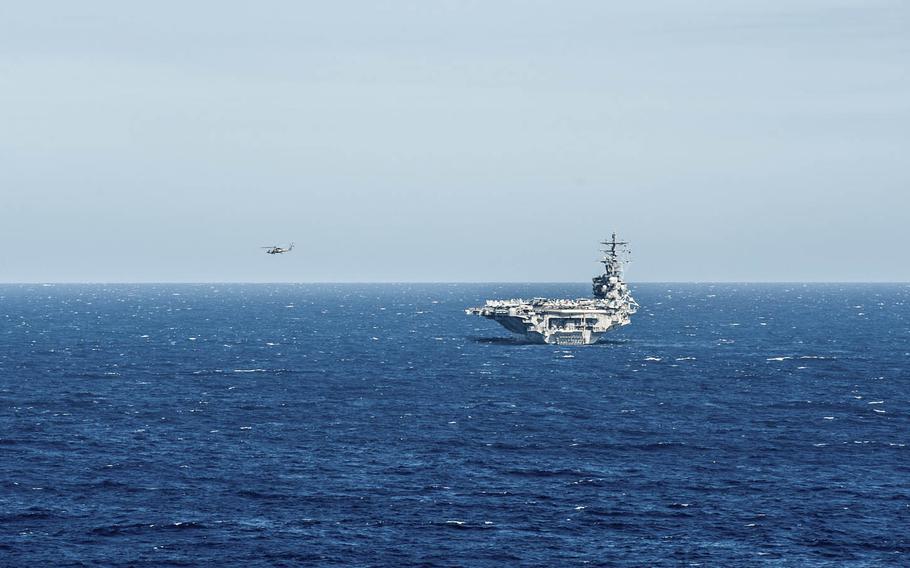 An MH-60R Seahawk takes off from the aircraft carrier USS Ronald Reagan in July 2016 in the South China Sea. (Nathan Burke/U.S. Navy photo)

The cause of the mishap, which happened during an emergency landing shortly after takeoff at about 9 a.m. Friday, is under investigation, a Navy statement said.

“All injured personnel are in stable condition under evaluation by Ronald Reagan medical staff,” it added.

Knight said there were four air crewmembers on board the helicopter when the crash happened.

The severity of the injuries “ranged from minor abrasions and lacerations to fractures,” according to an updated Navy statement released Friday night.

“The most seriously injured were medically evacuated off the ship to a hospital in the Philippines, while remaining injured are under evaluation by Ronald Reagan medical staff,” the statement said.

The Navy had notified the victims’ families by Friday evening, according to the updated statement.

Knight said maintenance crews are assessing the extent of the damage to the helicopter, which is assigned to the “Saberhawks” of Helicopter Maritime Strike Squadron 77. He said the Ronald Reagan “sustained minimal damage” in the crash but remains “fully mission-capable” and “resumed flight operations within a matter of hours.”

The nation’s only forward-deployed aircraft carrier was conducting “routine operations” in the Philippine Sea with its strike group when the incident occurred, the statement said.

In November, a C-2A Greyhound cargo plane carrying 11 people went down in the Philippine Sea while flying to the Ronald Reagan from Marine Corps Air Station Iwakuni.