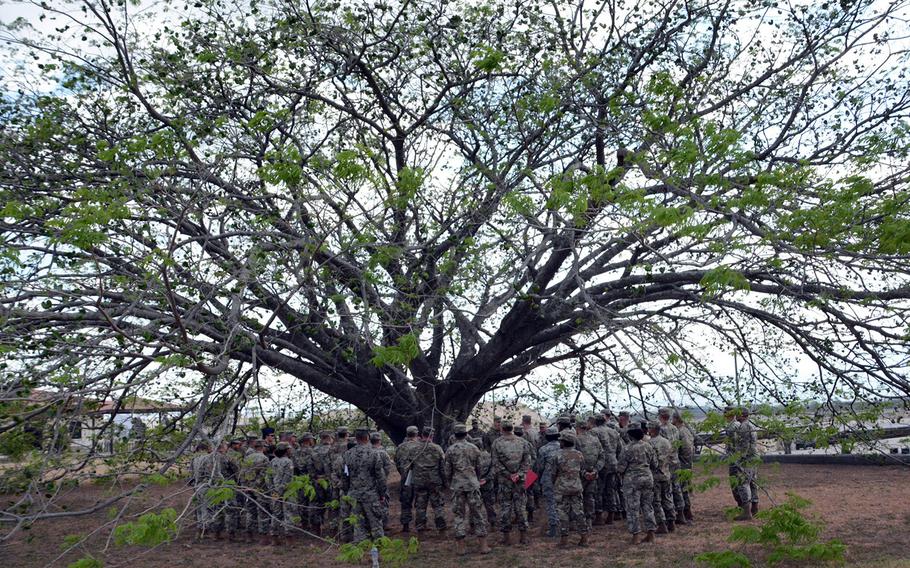 Buy Photo
Under the canopy of the so-called Tree of Life beside the Soto Cano Air Base flight line, commanders of Joint Task Force-Bravo speak to soldiers and airmen during a weekly "close-out" ceremony, Friday, March 8, 2019. (Wyatt Olson/Stars and Stripes) 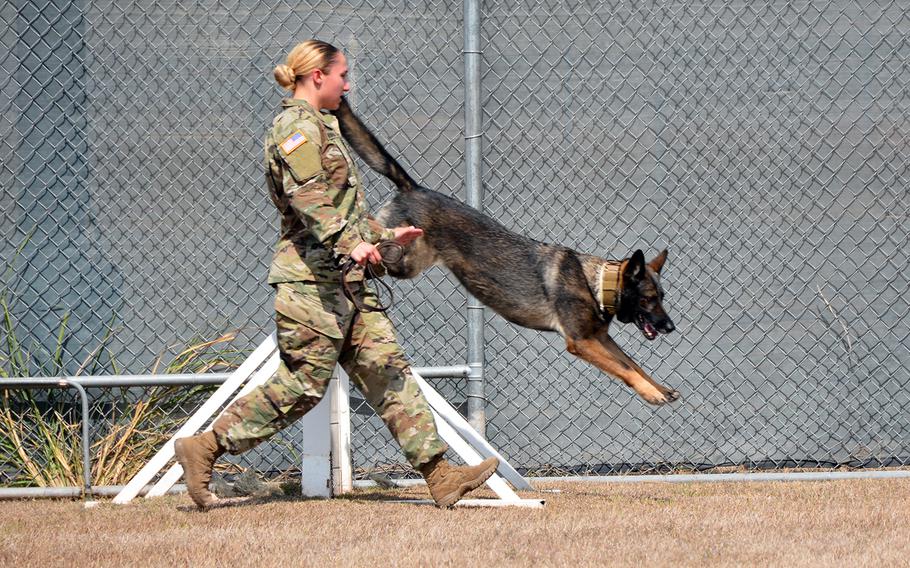 Buy Photo
Military working dog handler Pfc. Kristy Mundaniohl puts Lara through her paces in an obstacle course at Soto Cano Air Base, Honduras, March 7, 2019. Four working dogs and their handlers are deployed to the base at any given time. (Wyatt Olson/Stars and Stripes) Buy Photo
Army Reserve Maj. Michael Lucas, a physical therapist, examines a patient during one of his weekly visits to a clinic in the town of Comayagua near Soto Cano Air Base, Honduras, March 8, 2019. Sgt. Eduardo Pereira assists with Spanish translation. (Wyatt Olson/Stars and Stripes) Buy Photo
Decades-old buildings used for housing and offices at Soto Cano Air Base, Honduras, are gradually being razed and replaced with modern structures. (Wyatt Olson/Stars and Stripes) 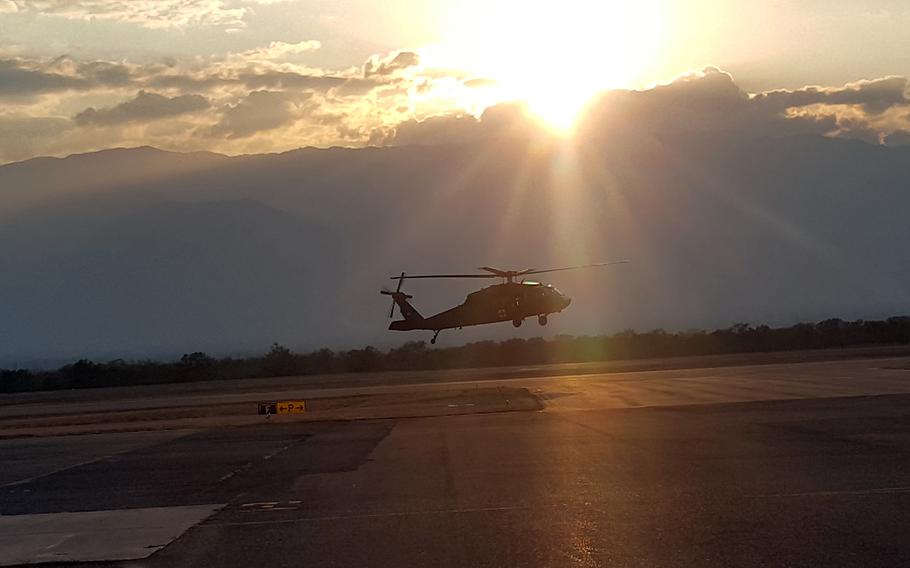 Buy Photo
A medical helicopter with the 228th Aviation Regiment lands as the sun sets behind the mountains overlooking Soto Cano Air Base, Honduras, March 7, 2019. (Wyatt Olson/Stars and Stripes)

SOTO CANO AIR BASE, Honduras — For the frequently rotating cadre of U.S. soldiers and airmen with Joint Task Force-Bravo in Honduras, success can be a tricky thing to measure.

Their assignments last six months to a year, with some as short as 90 days – little chance to see the fruit of one’s labor.

But Lt. Col. Patrick Blankenship, commander of the task force’s Army Forces, had an aha-moment late last year when the unit’s medical element was on a mission in northern Honduras, which 20 years earlier had been devasted by Hurricane Mitch.

Mitch was the kind of cataclysmic event that leaves survivors forever dividing their lives into the before and after. It killed more than 11,000 people when it hit Central America in October 1998. Honduras took the brunt of the storm, with more than 7,000 killed, mostly due to flooding.

During last year’s mission to the region hit hardest, a local television reporter told Blankenship of his experience in the 1998 storm when he was just 14 years old.

The boy had stood with his mother on a building rooftop in the town of Saba, surrounded by water with only the tops of banana trees poking above the surface.

“He remembered seeing endless streams of helicopters from JTF-Bravo picking people up off their rooftops,” Blankenship said. “He wanted to say thanks for that. That was one of those moments like, ‘Yes! This is great. You don’t get that all of the time, but people here have a deep-seated memory of the good things they’ve experienced from the United States and JTF-Bravo specifically.”

As the U.S. Defense Department’s longest-standing joint task force, Bravo has been the face of America’s military presence in Central America since it was established in 1983.

For the past two decades, the task force has focused on enhancing security and stability in Central America, particularly by providing disaster assistance to a region whose major exports are coffee, cacao and bananas.

It conducts that mission with a relatively small number of people. Roughly 1,200 Americans — almost 600 of whom are servicemembers — work out of Soto Cano Air Base, which also houses the Honduran Air Force Academy.

Joint Task Force-Bravo’s 612th Air Base Squadron oversees America’s sole military airfield in Central America, the only one in the region capable of handling the Air Force’s largest plane, the C-5 Galaxy.

The medical element, staffed by rotating deployments of Army Reservists, is the only expeditionary medical unit capable of performing surgery in Central and South America.

Harsh spotlight America’s role in Central America has been thrust into the spotlight in recent months as President Donald Trump amped up criticism of Central Americans seeking amnesty at the U.S. southern border.

In the weeks before the November midterm elections, Trump issued alarmist tweets and statements about “caravans” of migrants moving north through Central America in a quest for amnesty immigration in the United States. He threatened at that time to cut off aid to the region, and in late March, the U.S. State Department said it planned to end all aid to Honduras, El Salvador and Guatemala.

“It angers people in Central America, as it would in any country,” said Mark Schneider, a senior adviser with the Americas Program and the Human Rights Initiative at the Center for Strategic and International Studies, a think tank in Washington, D.C.

“Obviously that hurts the relationship,” he said. “But I don’t see that directly transformed into the public being angry at other U.S. institutions.”

Neither does Col. Kevin Russell, commander of Joint Task Force-Bravo.

“In this region of the world, relationships matter, and they matter deeply,” Russell recently told Stars and Stripes at his office on Soto Cano Air Base. “When you have an enduring relationship over 36 years — almost 37 years — that means a lot ... to our partners here in Honduras, our host nation, but then also in the region.

“So, when there’s a bit of rhetoric out there that says, ‘Hey, the U.S. is changing their stance and we don’t care as much about Central and South America as we did in the past,’ this place stands as a strong, very strong message — in my opinion — that no, nothing could be further from the truth.

“That hasn’t changed, and by all accounts I don’t think it will change.”

Evolving U.S. role U.S. military involvement in Central America, however, has morphed over the past four decades.

In the 1980s, efforts were focused on rolling back Soviet Union-backed communist influence — a goal that at times led to America supporting militaries of harsh regimes.

Under President Ronald Reagan’s administration, right-wing Nicaraguan Contra rebels were trained in Honduras to overthrow the socialist Sandinista government in nearby Nicaragua. By 1987, more than 1,000 personnel were assigned to Joint Task Force-Bravo.

With the collapse of the Soviet Union in the early 1990s, Bravo’s emphasis shifted to countering the flow of illegal narcotics and providing humanitarian assistance, and it has responded to numerous regional disasters such as earthquakes, hurricanes, volcanic eruptions and flooding.

Under Trump, the State Department’s updated strategy for engagement in Central America is “addressing the security, governance and economic drivers of illegal immigration and illicit trafficking.”

Blankenship said that at a tactical level, the task force’s medical training and humanitarian assistance missions dovetail with that updated strategy.

“I think what we have done in the past and what we currently do nests well within that, and we haven’t been given any direction to do something different as a result,” he said.

U.S. Southern Command, which oversees the task force, implements the U.S. strategy through a “network-based approach,” focusing on disrupting illicit networks involved in, say, drug smuggling or human trafficking — rather than on the commodities involved.

This is no simple matter since America’s relationships with the militaries and national police forces in those countries can be turbulent because of human-rights abuses, Schneider said.

The Defense Department recently suspended military aid to Guatemalan police because of improper use of armored vehicles supplied by the United States.

“In Honduras, there have been serious human rights violations by Honduran military and police, particularly some special police units,” Schneider said.

“The U.S. has trouble maintaining a professional relationship with militaries in the region because of policies and actions by those governments or their militaries,” Schneider said.

At his office on the base, Maj. David Embrey, commander of Bravo’s Joint Security Force, clicked his computer mouse and revealed a photo of members of his team and their Honduran counterparts.

“This is one of our good news stories,” said Embrey, whose bilingual military police force deploys from the U.S. Air Force and the Puerto Rico Army National Guard and ensures the security of the airfield and of personnel performing outside missions.

“We’ll bring in a bunch of local police, local Honduran military, and we do training on human rights,” he said. “We’re trying to build the professionalism and legitimacy of their military and their police so that their people look to them in their time of need. It builds the confidence of the general populace in the military and the police.”

Embrey described the short deployments to Soto Cano as a sprint rather than a marathon.

“Because everything we do here — I really don’t see” the results, he said. “I’m trying to do things now that will improve the mission two successors after me.

“How can I make the foxhole a little bit better than I found it?”