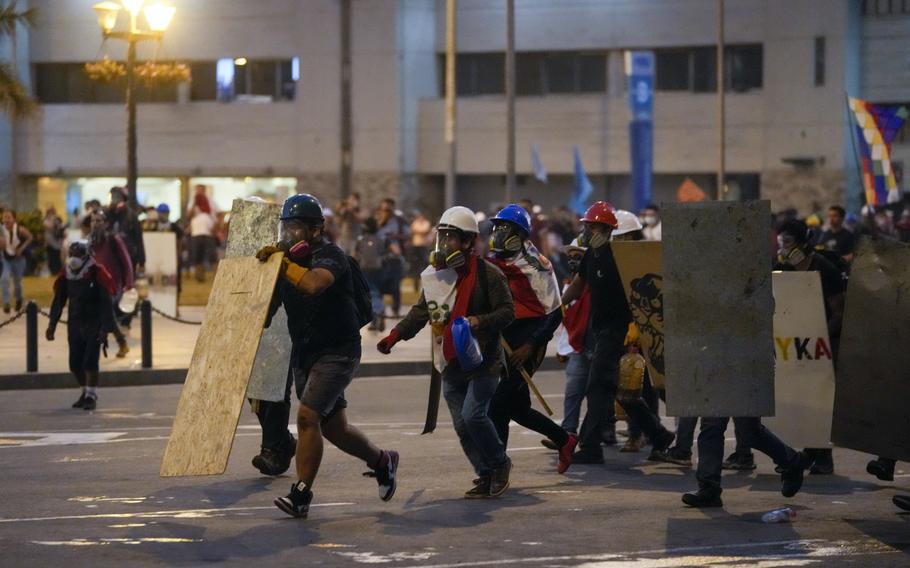 LIMA, Peru — Thousands of protesters took to the streets of Peru's capital and were met with volleys of tear gas and pellets amid clashes with security forces just hours after President Dina Boluarte called for a "truce" in almost two months of protests.

The antigovernment protest Tuesday was the largest – and most violent — since last Thursday, when large groups of people, many from remote Andean regions, descended on the capital to demand Boluarte's resignation, immediate elections and the dissolution of Congress.

"We can't have a truce when she doesn't' tell the truth," Blanca España Mesa, 48, said of Peru's president. Even though her eyes were watering from the tear gas, España Mesa said she was "happy because a lot of people came today. It's as if people have woken up."

Before last week, most of the large antigovernment protests that followed the ouster of President Pedro Castillo took place in remote regions of Peru, largely in the country's south, exposing deep division between residents of the capital and the long-neglected countryside.

The crisis that has sparked Peru's worst political violence in more than two decades began when Castillo, Peru's first leader from a rural Andean background, tried to short-circuit the third impeachment proceeding of his young administration by ordering Congress dissolved on Dec. 7. Lawmakers impeached him instead, the national police arrested him before he could find sanctuary and Boluarte, who was his vice president, was sworn in.

Since then, 56 people have died amid the unrest involving Castillo's supporters, 45 of whom died in direct clashes with security forces, according to Peru's ombudsman. None of the deaths have been in Lima.

On Tuesday, police fired round after round of tear gas as they blocked the passage of protesters, who seemed more organized than before. The smell of tear gas permeated the air and could be felt even a block away as people leaving work suddenly had to cover their faces to try to diminish the sting.

"Murderers," yelled the protesters, some of whom threw rocks at the police.

Even after most of the protesters had left, police continued firing tear gas to disperse small groups of people in a plaza in front of the country's Supreme Court.

"I have a right to protest in this country," Emiliano Merino, 60, said as he was being treated by volunteer paramedics after pellets grazed each of his arms.

Boluarte had earlier called for a truce and blamed protesters for the political violence that has engulfed the country, claiming in a news conference that illegal miners, drug traffickers and smugglers formed a "paramilitary force" to seek chaos for political gain. She said numerous road blockades across the country and damage to infrastructure have cost the country more than $1 billion in lost production.

She suggested that the protesters who died with bullet wounds were shot by other demonstrators, claiming investigations will show their injuries are incompatible with the weapons officers carry. And meanwhile, some 90 police officers are hospitalized with bruises, she said: "What about their human rights?" the president asked.

The government has not presented evidence that any of the injured officers were struck by gunfire.

Human rights advocates say they are dismayed by the lack of international outcry from the regional and global community and are calling for condemnation of the state violence unleashed since Castillo's impeachment.

"None of the states in the region have done anything concrete," she said.

Boluarte was notably absent from a meeting of regional leaders Tuesday in Argentina's capital, where most avoided mention of the civilian deaths in Peru.

Human rights activists have acknowledged acts of violence by some protesters — including efforts to take over airports and burn police stations — but say the demonstrations have largely been peaceful.

Some of the leaders at the summit of the Community of Latin American and Caribbean States did blame Peru's government for the violence.

Chile's President Gabriel Boric said there's "an urgent need for a change in Peru because the result of the path of violence and repression is unacceptable." Mexico's president, Andrés Manuel López Obrador, a staunch supporter of Castillo, demanded an "end to the repression."

During the summit's closing ceremony, Argentina's President Alberto Fernández called for an end to "street violence and institutional violence that has taken the lives of so many people" in Peru.

"The international community has expressed concern, but really I think it could be more forceful," said César Muñoz, associate director of the Americas division at Human Rights Watch.

After some feverish closed-door negotiations in Buenos Aires in the afternoon, the situation in Peru was left out of the summit's closing documents. "Peru is a prickly issue," but pressure from some leaders had led to last-minute negotiations, said an official in Argentina's Foreign Ministry, speaking on condition of anonymity for lack of authority to discuss policy.

"Peru has managed to fly under the radar," said Marina Navarro, executive director of Amnesty International Peru. "Given the gravity of the situation, with this number of people who have died, we don't see as much said about it as there could be."