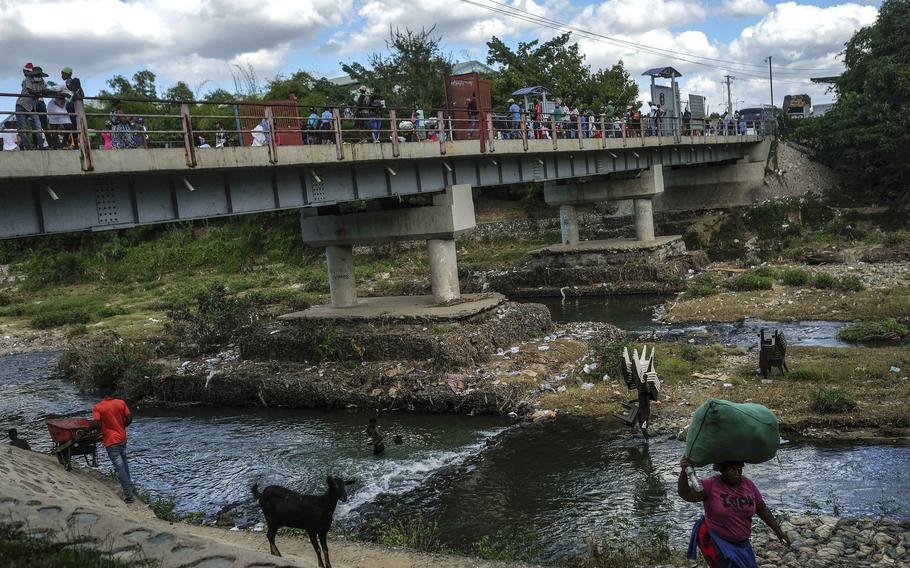 People bathe in the Massacre River on the border between Dominican Republic and Haiti, in Ouanaminthe, Dominican Republic, Nov. 19, 2021. Dominican authorities have expelled at least 1,800 unaccompanied Haitian migrant children in 2022 back to their crisis-stricken country, UNICEF said on Nov. 22, 2022. The Dominican Republic denied the claim. (Matias Delacroix/AP)

HAVANA — Dominican authorities have expelled at least 1,800 unaccompanied Haitian migrant children this year, sending them back to their crisis-stricken country, UNICEF said.

The Dominican Republic denied the claim, which came Tuesday amid the government's intensifying crackdown on migration in response to a cholera outbreak and ongoing gang violence in Haiti. The two countries share a 240-mile (390-kilometer) border on the island of Hispaniola.

The crackdown has provoked harsh criticism by international observers, including the United States, which have accused the country of mass deportations, racist treatment of migrants and detentions of Haitians in facilities with poor conditions.

Among those fleeing to the Dominican Republic are girls and boys, many of whom are sent back to Haiti through different border points, where they have been received by UNICEF partners at the border, according to the organization.

The information was first reported by CNN, and confirmed by UNICEF, which declined to comment further. It is still unclear if the children were expelled without their parents, got separated during the journey or fled Haiti alone.

Venancio Alcántara, director of the Dominican Republic's migration authority, denied the claims, saying the agency follows specific procedures with child migrants and that "minors are with their parents at all times."

"All deportations are carried out with complete and absolute respect for human dignity and human rights," Alcántara wrote in a statement Tuesday.

Tensions fueled by migration have simmered for years between the two countries, but they have only deepened since the 2021 assassination of Haitian President Jovenel Moïse, which thrust an already crisis-stricken Haiti into chaos.

Dominican authorities say heightened border enforcement and deportations are crucial to national security amid intensifying turmoil in the neighboring country. An unidentified number of protesters last week attempted to burn down the Dominican consulate in Cap-Haïtien, a municipality in the north of the country, Haitian authorities said Wednesday.

Haiti last week accused its neighbor of subjecting fleeing Haitians to "inhumane, cruel and degrading conditions," while the United States Embassy in the country's capital, Santo Domingo, warned that darker-skinned Americans could be targeted by authorities in the country.

"There are reports that detainees are held in overcrowded detention centers, without the ability to challenge their detention and without access to food or toilets, sometimes for days, before being released or deported to Haiti," the U.S. notice added.

The Dominican Republic said it "profusely rejects" the allegations, which they say are not backed up by evidence, and said they will only increase deportations.

Authorities say they deported 43,900 migrants, mostly Haitians, between July and October, according to figures from the country's Ministry of Foreign Affairs. In September and October alone, deportation figures shot up by about 50%.