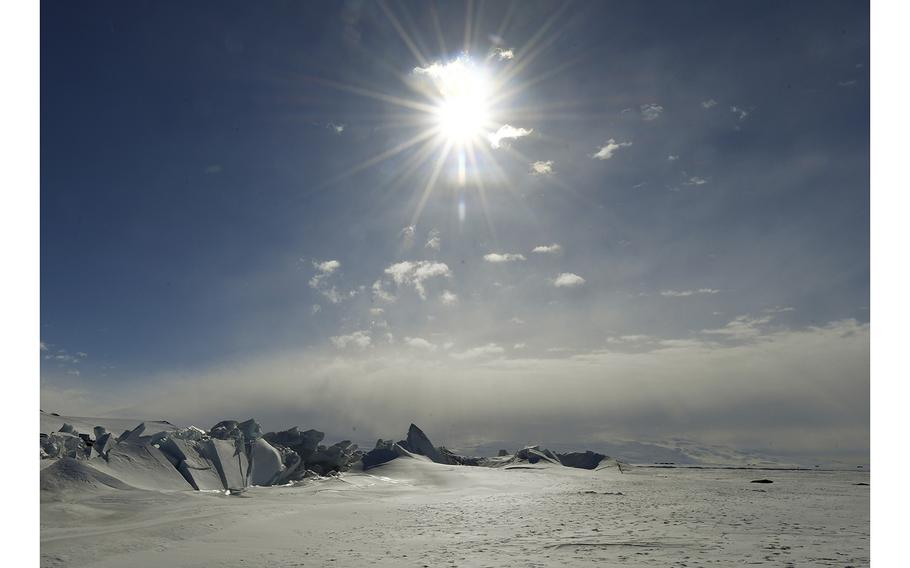 A frozen section of the Ross Sea at the Scott Base in Antarctica is seen on Nov. 12, 2016. (Mark Ralston/Pool via AP )

Scientists say the window for protecting the world's largest ice sheet from significantly shrinking is narrowing, with troubling new predictions that it has the potential to unleash sea level rises of up to 16 1/2 feet over the long term if greenhouse gas emissions targets aren't met.

The vast East Antarctica Ice Sheet, which is about the size of the United States, used to be considered less vulnerable to climate change than the Greenland and West Antarctica ice sheets — where several glaciers have been losing ice rapidly as they are undercut by warm ocean water. Over recent years, however, research has started to emerge challenging that view.

The latest study, published in the journal Nature, combined recent findings about potential vulnerabilities in the bedrock and undersea topography — particularly in areas where glaciers interact with warm water — with an analysis of warm periods in Earth's past.

The team of researchers from Australia, Britain, France and the United States found that if global temperature increases are below the upper limit set by the 2015 Paris climate accord — 2 degrees Celsius above preindustrial levels — that should mean the ice sheet adds less than 1.6 feet to sea levels by the year 2500. Any increase above that temperature has the potential to raise sea levels by as much as 16.4 feet over the same period.

"The choices that we're making today in terms of emission reductions are going to set in place whether East Antarctica stays largely dormant as a very large ice sheet, or if we start to set in motion some unstoppable changes that are going to add to the sea level rise problem that we're already facing," Nerilie Abram, a climate scientist at Australian National University and a co-author of the study, said in an interview.

U.N. Secretary General António Guterres earlier this year warned that the more ambitious goal set out in the Paris agreement — to limit the global temperature rise to 2.7 degrees Fahrenheit above preindustrial levels — is "on life support."

The researchers said evidence from seafloor sediments around East Antarctica indicates that part of the ice sheet collapsed and contributed to increasing sea levels by several meters during the mid-Pliocene era, about 3 million years ago, when temperatures were about 2 to 4 degrees Celsius higher than now. Approximately 400,000 years ago, there is evidence that a part of the ice sheet retreated more than 400 miles inland, at a time when it was 1 to 2 degrees Celsius warmer than right now.

"A key lesson from the past is that the East Antarctic Ice Sheet is highly sensitive to even relatively modest warming scenarios. It isn't as stable and protected as we once thought," Abram said.

Chris Stokes, a geography professor at Britain's Durham University and the study's lead author, said that satellite observations have suggested the ice sheet is thinning and retreating, particularly where glaciers are in contact with warm ocean currents.

"This ice sheet is by far the largest on the planet, containing the equivalent of 171 feet of sea level and it's really important that we do not awaken this sleeping giant," Stokes said in a statement.

Nick Golledge, a glaciologist at the Antarctic Research Center in Wellington, New Zealand, who did not work on the study, said the real concern for East Antarctica is the period beyond what the paper considers. Even as greenhouse gas emissions decrease or stop, the amount of heat locked in will lead to retreat for millennia, as the ocean continues to absorb heat from the atmosphere.

"The past warm periods mentioned in the paper help with these inferences, but the uncertainties remain very large," he said.

Australian scientists are embarking on a campaign over the next few years to deepen their understanding of the Denham glacier region, a 12-mile-wide stream of ice that flows over the deepest undersea canyon in the East Antarctica Ice Sheet. Scientists have previously warned that the canyon could provide a potential pathway for the ocean to infiltrate deep into Antarctica's center.

"We understand the Moon better than East Antarctica. So, we don't yet fully understand the climate risks that will emerge from this area," said Matt King, co-author of the latest study and an expert in sea level and ice sheet change at the University of Tasmania.

The Washington Post's Chris Mooney contributed to this report.