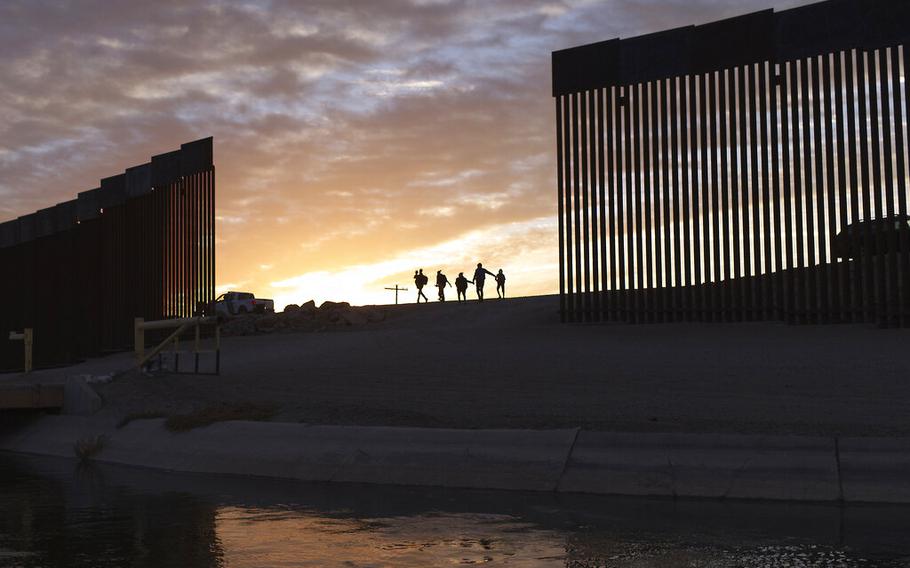 A pair of migrant families from Brazil pass through a gap in the border wall to reach the United States after crossing from Mexico to Yuma, Ariz., on June 10, 2021. Border officials got the go-ahead Thursday, July 28, 2022, to fill four remaining gaps in the U.S.-Mexico wall near the southern Arizona community of Yuma for safety reasons. (Eugene Garcia/AP)

PHOENIX — The Biden administration on Thursday authorized completion of the Trump-funded U.S.-Mexico border wall in an open area of southern Arizona near Yuma that has become one of the busiest corridors for illegal crossings.

Biden had pledged during his campaign to cease all future wall construction, but the administration later agreed to some barriers, citing safety. The Department of Homeland Security said Thursday the work to close four wide gaps in the wall near Yuma will better protect migrants who can slip down a slope or drown walking through a low section of the Colorado River.

The agency said in a statement that Secretary Alejandro Mayorkas authorized completion of the project near the Morelos Dam, reflecting the administration's "priority to deploy modern, effective border measures and also improving safety and security along the Southwest Border." It was initially to be funded by the Defense Department but will now be paid for out of Homeland Security's 2021 budget.

The Border Patrol Yuma sector has quickly emerged as the third busiest of nine sectors along the border, with much of the traffic funneling through the Morelos Dam. Migrants arrive in the small town of Algodones and walk unencumbered across a concrete ledge on the dam to U.S. soil, where they wait for Border Patrol agents to take them into custody.

Completion of the wall was at the top of former President Donald Trump's agenda, and border security remains a potent issue for candidates of both parties going into this year's primary elections. President Joe Biden halted new wall construction after he took office, but he has since made closing the gaps just south of Yuma a priority.

Democratic U.S. Sen. Mark Kelly of Arizona, who is seeking his party nomination's next week to defend the seat in November, has pressed the Biden administration to close the gaps, calling them a challenge for officials trying to secure the border.

Agents stopped migrants more than 160,000 times from January through June in the Yuma sector, nearly quadruple from the same period last year. The only other sectors with more traffic were Del Rio and Rio Grande Valley in South Texas.

The area has been especially attractive to Colombians, Venezuelans and others who have flown to Mexicali, Mexico, and taken a short bus or taxi ride to Algodones to walk across the border before being released into the United States.

But Arizona environmentalist Myles Traphagen, who has been mapping ecological damage left by border wall construction under the Trump administration, said that closing the gaps won't be much of a deterrent.

Traphagen said the Yuma area has "become the new Ellis Island for Arizona, with people arriving there from countries as disparate as Ethiopia, Cuba, Russia, Ukraine, India, Colombia and Nicaragua.

"People have traveled half way around the globe on planes, trains and automobiles," he said, "so to expect that closing four small gaps is going to make them turn around and book a return flight on Air Ethiopia is sheer fallacy."

A 5-year-old migrant girl crossing the water in a group drowned near the dam June 6 when she became separated from her mother. The child's body was later found in the river.

U.S. officials didn't release the girl's identity or nationality. But Jamaican newspapers have said she was believed to be from that country.

It was unclear when construction would begin. The statement said officials will move "as expeditiously as possible, while still maintaining environmental stewardship" by consulting affected parties.

Advocates in San Diego say the Border Patrol there has told them of plans to erect two 30-foot- (9.1-meter) high bollard-style barriers through the border's iconic Friendship Park. Like the Yuma project, the additional construction was funded during Trump's administration but not completed before his presidency ended.

The new barriers will replace shorter walls and severely impede cross-border views, including to San Diego's skyline from Tijuana, said the Rev. John Fanestil of Friends of Friendship Park, a group that advocates for public access to the binational park inaugurated in 1971 by-then first lady Pat Nixon.

Environmentalists like Traphagen, meanwhile, have called for removal of other sections of barrier they say hurt local wildlife like bobcats, mountain lions, javelinas and mule deer.

The Tucson-based Wildlands Network this week released a new report on sites along the U.S.-Mexico border that it considers in the greatest need of environmental restoration.

Traphagen, the group's borderlands program coordinator, traveled the international boundary across New Mexico, Arizona and California this and last year to identify damaged wildlife corridors and other environmental harm.

The group calls for native foliage to be replanted in areas that were stripped bare during wall construction, and widening spaces between steel borders, now just 4 inches apart, to allow more wildlife to pass through.

It also calls for the removal of 180 miles of razor wire that were installed along pedestrian bollard fencing in all border states in 2019 and 2020 both as an eyesore and a danger to the public and wild animals.