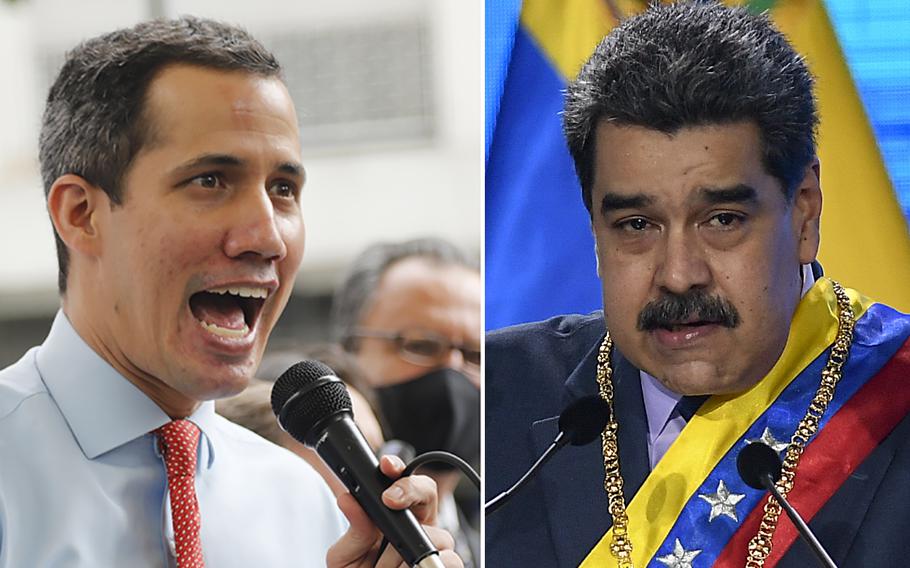 Juan Guaido, the leader of Venezuela’s National Assembly who says he is also the country’s interim president, gives a press conference in Caracas, Venezuela on Dec. 7, 2020, left, and Venezuelan President Nicolas Maduro speaks in Caracas, Venezuela on Jan. 22, 2021. Guaidó won a U.K. court ruling Friday, July 29, 2022 that takes him a step closer to victory in his battle with Maduro over a cache of gold bullion held in the Bank of England. (Ariana Cubillos and Matias Delacroix/AP)

LONDON — Venezuelan opposition leader Juan Guaidó won a U.K. court ruling Friday that takes him a step closer to victory in his battle with President Nicolás Maduro over a cache of gold bullion held in the Bank of England.

A judge at the High Court in London ruled that British courts do not need to recognize judgments by the Supreme Tribunal of Justice of Venezuela, Venezuela's top constitutional court, that said the gold should go to Maduro.

The ruling is part of a long-running wrangle over assets of Venezuela's central bank. Two rival boards of Banco Central de Venezuela – one appointed by Maduro and another by Guaidó – are battling to secure the release of more than 800 million pounds ($1 billion) of gold in the vaults of the Bank of England.

The British government recognizes Guaidó as Venezuela's president, and the Bank of England has refused to hand the gold over to Maduro.

Judge Sara Cockerill said there was "no basis" for the recognition of the judgments of the Venezuelan court that declared Guaidó's bank board appointments unconstitutional. She said the Guaidó board "therefore succeeds."

In a statement, Guaidó said the ruling was "another step in the process of protecting Venezuela's international gold reserves and preserving them for the Venezuelan people and their future."

A spokesperson for the Maduro-appointed board said it was considering an appeal.

"This is an unfortunate ruling that ultimately rests on a narrow issue of law about the recognition of foreign judgments," lawyer Sarosh Zaiwalla, who represents the Maduro board, said.

Venezuela's Central Bank itself later issued a statement complaining that the British court had subordinated itself to British foreign policy and had violated international law.

While serving as leader of Venezuela's National Assembly, Guaidó challenged Maduro's claim to the presidency, arguing that his 2018 election was rigged and invalid. Guaidó says he's the country's interim president under provisions of the constitution that allow the head of the national legislature to take power until free elections can be held.

While a number of countries, including the U.S. and the U.K., recognized Guaido's claim, he has never been able to assert his authority and Maduro remains in charge.