There were 200 kidnappings in Haiti in May, UN agency says 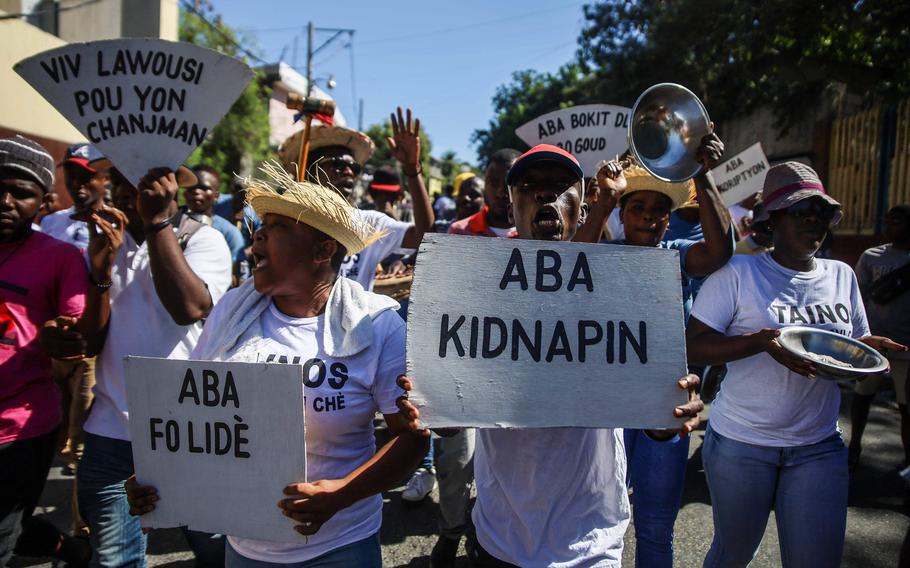 People protest in Port-au-Prince, Haiti on Nov. 18, 2021, against the country’s spike in kidnappings and gang-aggravated fuel crisis, on the day marking the 218th anniversary of the Battle of Vertières, the historic victory against France. (Richard Pierrin/AFP/Getty Images/TNS)

(Tribune News Service) — Exactly one year after warring gangs shut down transportation links to the southern regions of Haiti, armed groups continue to restrict access to vulnerable communities in Port-au-Prince, forcing thousands of others from their homes on the eastern outskirts of the capital and creating travel problems in the north of the country, the United Nations said Friday.

He noted that among those killed were 96 suspected gang members. Despite efforts by police to fight armed gangs, kidnappings have continued unabated and access to violence-affected neighborhoods remains limited, leading to alarmingly high malnutrition rates among children in some capital neighborhoods.

“Incidents of kidnapping for ransom have increased dramatically with some 200 cases in Port-au-Prince, recorded in May alone,” he said. “U.N. partners have been unable to collect and deliver relief supplies due to lack of access to the port area.”

In the Cité Soleil neighborhood of the capital, malnutrition rates have risen dramatically, with 20% of children under the age of 5 suffering from not getting enough food.

“In response to the alarming numbers of malnourished children in Cité Soleil, community health workers are distributing packs of ready-to-use therapeutic food provided by UNICEF. More than 2,000 children have been assisted.”

The U.N., Dujarric said, is relying more on grassroots organizations and nongovernmental groups to provide services in difficult-to-reach areas of the city. Where possible, they are delivering hot meals and hygiene kits and other items. He also noted that this week marks one year since transport links to the south of Haiti were closed down by gangs after clashes erupted in the Martissant neighborhood at the southern entrance of Port-au-Prince.

The dire picture painted by the U.N. comes amid mounting concerns about the situation in Haiti, which is expected to be a focus of discussion among hemispheric leaders attending next week’s Summit of the Americas in Los Angeles. Hosted by the U.S., the event starts Monday and is expected to be attended by interim Haiti Prime Minister Ariel Henry.

In its latest report, the U.N. Office of the High Commissioner for Humanitarian Rights noted that the situation remains highly volatile in Haiti.

Testimonies collected and cited by the office “describe extreme gang violence, including beheadings, mutilations and burning of bodies, as well as gang rapes, including of young children, used to terrorize and punish people living in areas controlled by rival gangs,” the report said.