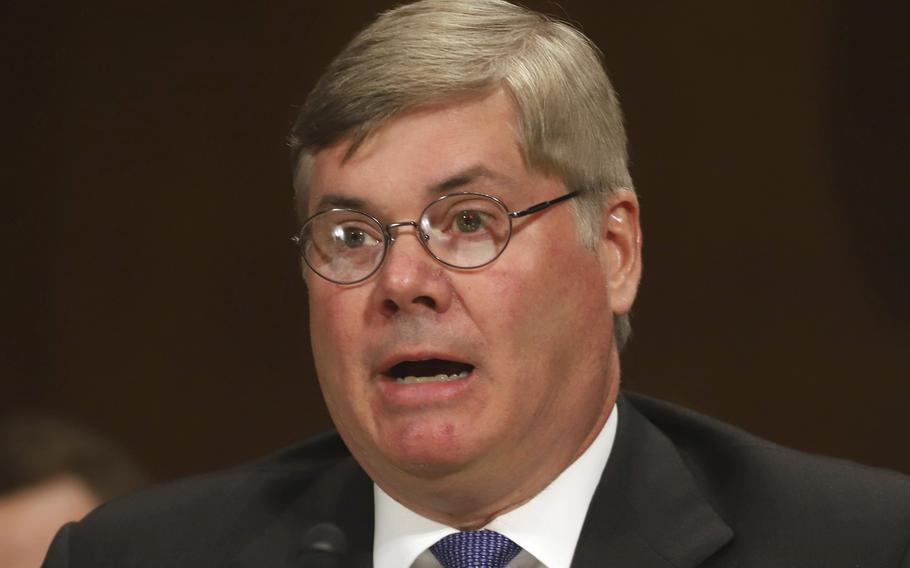 Robert R. Summerhays, the nominee for District Judge for the Western District of Louisiana, gives testimony during a Senate hearing on Capitol Hill in Washington on April 11, 2018. Summerhays heard arguments on Friday, May 13, 2022, on whether the Biden administration can lift pandemic-related restrictions on immigrants requesting asylum later this month. (Harry Hamburg/AP)

LAFAYETTE, Louisiana (AP) — An attorney arguing for 21 states urged a federal judge Friday to block Biden administration plans to lift pandemic-related restrictions on migrants requesting asylum, saying the decision was made without sufficient consideration on the effects the move could have on public health and law enforcement.

Drew Ensign, an attorney for the state of Arizona, told U.S. District Judge Summerhays the lawsuit Arizona, Louisiana and 19 other states filed to block the plan was "not about the policy wisdom" behind the announcement to end the plan May 23.

But, Engsign said, the Centers for Disease Control did not follow proper administrative procedures requiring public notice and gathering of comments on the decision to end the restrictions imposed under what is known as Title 42 authority. The result, he said, was that proper consideration was not given to likely resulting increases in border crossings and their possible effects, including pressure on state health care systems and the diversion of border law enforcement resources from drug interdiction to controlling illegal crossings.

Jean Lin, with the Justice Department, argued that the U.S. Centers for Disease Control was within its authority to lift an emergency health restriction it felt was no longer needed. She said the CDC order was a matter of health policy, not immigration policy.

"There is no basis to use Title 42 as a safety valve," Lin told Summerhays.

Summerhays gave no indication when he would rule, but he noted that time is short and he told attorneys they did not need to file post-argument briefings. In addition to deciding whether to block the policy, he also will decide whether his ruling applies nationwide or in specific states.

So far, Summehays' rulings have strongly favored those challenging the administration.

Migrants have been expelled more than 1.8 million times since March 2020 under federal Title 42 authority, which has denied them a chance to request asylum under U.S. law and international treaty on grounds of preventing the spread of COVID-19.

On April 1, the CDC announced President Joe Biden's plan to end the restriction by May 23, drawing criticism from Republicans and some Democrats who fear the administration is unprepared for a widely anticipated influx of migrants.

Arizona, Louisiana and Missouri quickly sued and were later joined by 18 other states in the legal challenge being heard Friday. Texas sued independently.

After the administration acknowledged last month that it had already begun phasing out the pandemic restriction by processing more migrants under immigration law instead of Title 42, Summerhays ordered the phaseout stopped.

An appointee of then-President Donald Trump, Summerhays wrote last month that winding down restrictions before May 23 would inflict "unrecoverable costs on healthcare, law enforcement, detention, education, and other services" on the states seeking to keep the policy in effect.

He also said the administration likely failed to follow federal rule-making procedures in planning the May 23 end of the policy. Friday's arguments pertained to whether to keep restrictions in place beyond that date while litigation proceeds.

Several migrant advocacy groups have asked Summerhays to at least allow Title 42 to be lifted as planned in California and New Mexico, two border states that have not challenged the administration's decision.

Separately, Congress has presented another potential obstacle to ending Title 42. Several moderate Democrats have joined Republicans to voice concern that authorities are unprepared for an influx of migrants.

Large numbers of illegal crossings have emboldened some Republicans to try to make the border and immigration an election-year issue. U.S. authorities stopped migrants more than 221,000 times at the Mexican border in March, a 22-year high. Many of those were repeat crossers because Title 42 carries no legal or criminal consequences.

Title 42 authority has been applied unevenly across nationalities. Mexico has agreed to take back migrants from Guatemala, Honduras, El Salvador and Mexico — and limited numbers from Cuba and Nicaragua. High costs, strained diplomatic relations and other considerations have made it more difficult to remove migrants from other countries, who must be flown home.

Title 42 is one of two major surviving Trump-era policies to deter asylum at the border.

Last month, the U.S. Supreme Court heard arguments on whether to allow the administration to force asylum-seekers to wait in Mexico for hearings in U.S. immigration court. That case originated before another Trump-appointed judge, in Amarillo, Texas.