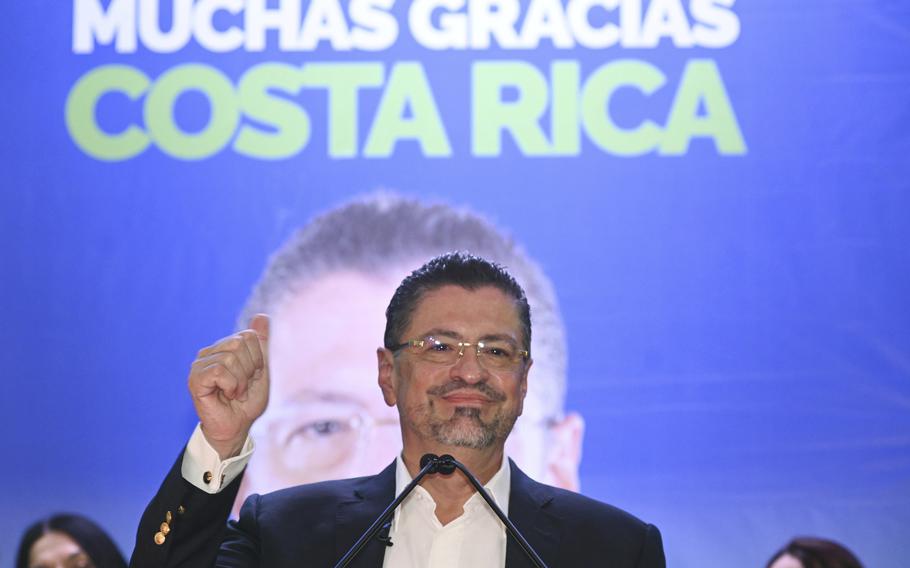 Costa Rica’s former finance minister Rodrigo Chaves speaks to supporters at his headquarters in San Jose, Costa Rica, after winning a presidential runoff election, Sunday, April 3, 2022. Chaves has begun a four-year term as Costa Rica’s new president on Sunday, May 8, taking office with a lengthy list of reproaches for his predecessor and the country’s political class while promising great change. (Carlos Gonzalez/AP)

SAN JOSE, Costa Rica — Rodrigo Chaves began a four-year term as Costa Rica's president on Sunday, taking office with a lengthy list of reproaches for his predecessor and the country's political class while promising great change.

Shortly after being given the ceremonial presidential sash by outgoing President Carlos Alvarado Quesada, Chaves lashed out at the state of the nation he has been left to lead, complaining of the high cost of living, crime, drug trafficking and long lines at social security offices.

"Not only are we going to put the house in order, we are going to rebuild it!" he vowed. "This is the sign of our times. It is the urgency for change that cannot be delayed, the cry of a democracy that we will not let disappear!"

He warned that "if the political class fails one more time, the country could fall apart."

He dismissed the idea he said was held by many that the Central American nation is "ungovernable."

"Look at me as I am, a humble instrument to comply with the mandate of the people, a people who united can achieve the urgent change that history imposes on us," he said in his inaugural address at the national legislature.

The conservative economist, who was briefly finance minister under Alvarado, had cast himself as the outsider in the race, noting that his Social Democratic Progress Party had never won at any level before this year.

The World Bank veteran is hardly a newcomer to the establishment, but in the April 3 election he defeated a man who was almost a symbol of it: José María Figueres, a former president and son of a three-time president.

Chaves may find governing difficult, however: His party has only 10 of 57 seats in the legislature.

During his campaign he called for lowering the cost of living and after winning, he promised — without giving details — to start with the costs of gasoline, rice and electricity.

Chaves won despite being dogged by a scandal that drove him out of the World Bank, where he was accused of sexual harassment by multiple women, was eventually demoted and then resigned. He has denied the accusations.

Costa Rica has enjoyed relative democratic stability compared with other countries in the region, but the public has grown frustrated with public corruption scandals and high unemployment.

Alvarado's party was almost obliterated during elections in February, receiving no seats in the new congress.