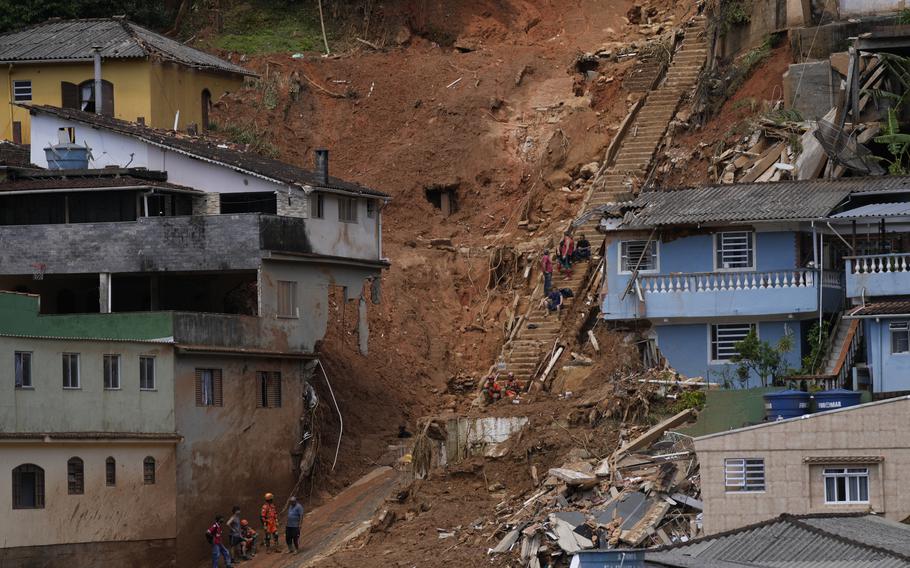 PETROPOLIS, Brazil — The death toll from floods and landslides that swept down on the mountain city of Petropolis rose to at least 110 on Thursday and local officials said it could still rise sharply, with more than 130 people still unaccounted for.

The Rio de Janeiro state government confirmed the rising loss of life hours after local police announced 134 people are missing, many feared trapped in mud beneath the German-influenced city nestled in the mountains above the city of Rio de Janeiro.

Torrents of floodwaters and mudslides dragged cars and houses through the streets of the city Tuesday during the most intense rainfall in decades. One video showed two buses sinking into a swollen river as its passengers clambered out the windows, scrambling for safety. Some didn't make it to the banks and were washed away, out of sight.

Survivors dug through the ruined landscape to find loved ones even as more landslides appeared likely on the city's slopes. A small slide Thursday prompted an evacuation but didn't cause injuries.

Rosilene Virginia' said her brother barely escaped, and she considers it a miracle. But a friend hasn't yet been found.

"It's very sad to see people asking for help and having no way of helping, no way of doing anything," Virginia told The Associated Press as a man comforted her. "It's desperate, a feeling of loss so great." 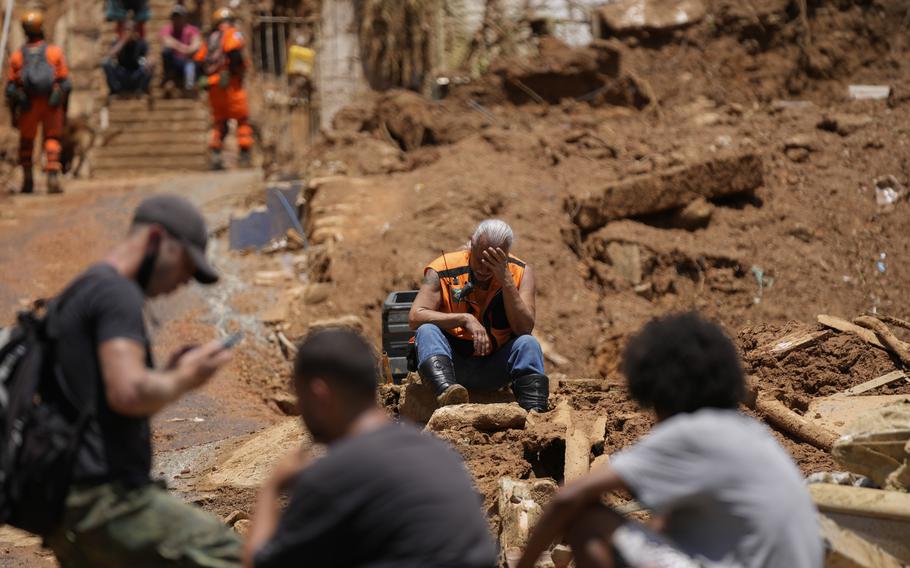 A rescue worker takes a break on the second day of rescue efforts after deadly mudslides in Petropolis, Brazil, Thursday, Feb. 17, 2022. (Silvia Izquierdo/AP) 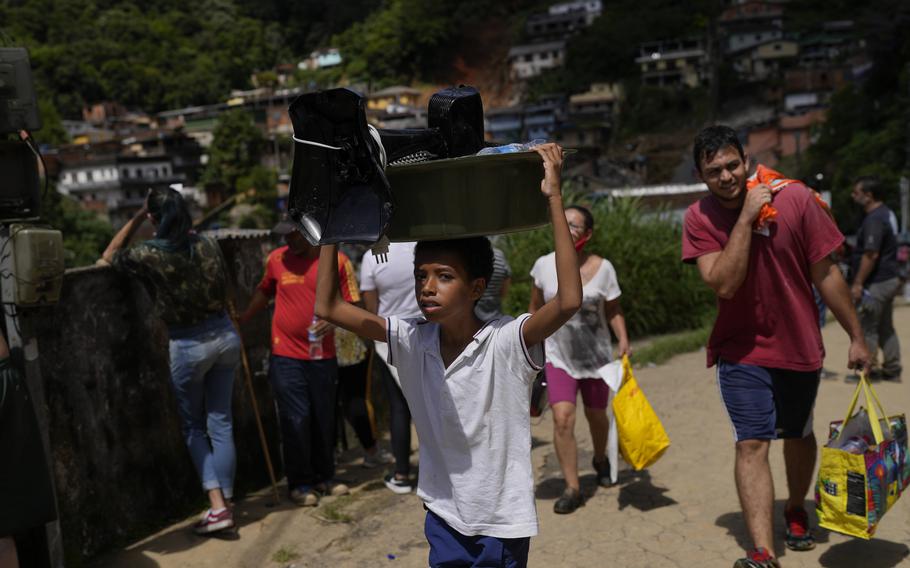 A youth carries a fan as he and other residents evacuate the area on the second day of rescue efforts after mudslides in Petropolis, Brazil, Thursday, Feb. 17, 2022. (Silvia Izquierdo/AP) 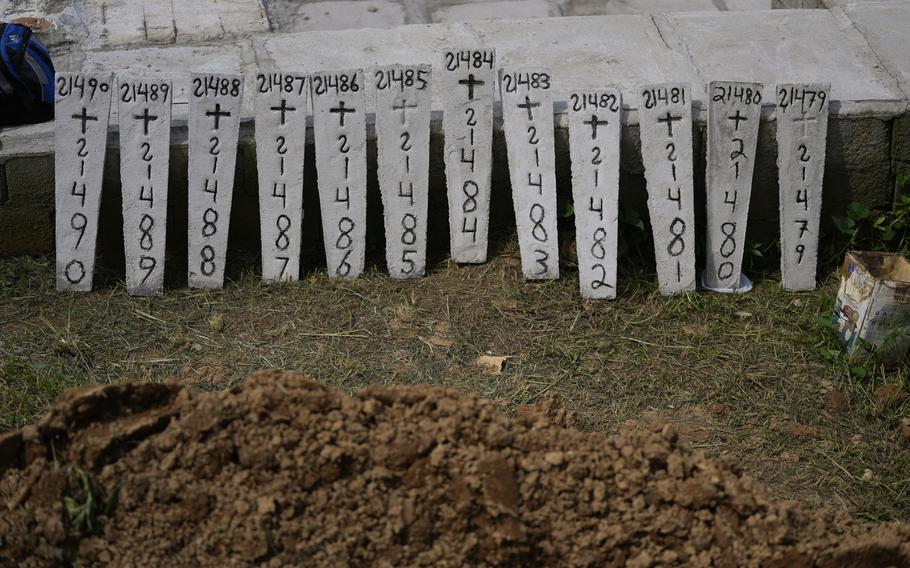 Identification numbers are lined up at the Municipal Cemetery for the burials of mudslide victims in Petropolis, Brazil, Thursday, Feb. 17, 2022. (Silvia Izquierdo/AP) 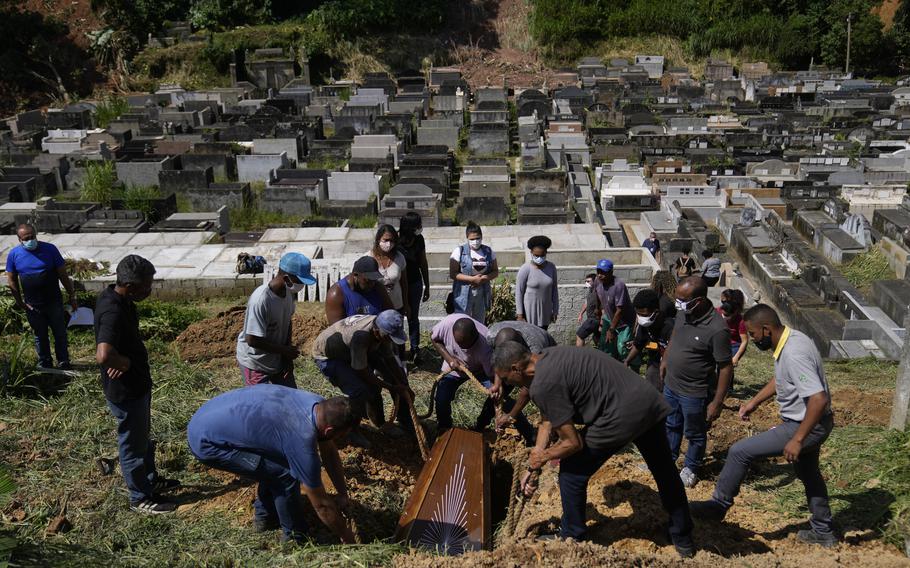 The remains of 54-year-old woman Zilmar Batista, who died in the mudslides, are buried at the Municipal cemetery in Petropolis, Brazil, Thursday, Feb. 17, 2022. (Silvia Izquierdo/AP)

As some people tried to clear away mud, others began burying lost relatives, with 17 funerals at the damaged cemetery.

Rio police said in a statement Thursday that about 200 agents were checking lists of the living, the dead and the missing by visiting checkpoints and shelters, as well as the city's morgue. They said they managed to remove three people from a list of missing after finding them alive in a local school.

"Every detail is important so we can track people," said Rio police investigator Elen Souto. "We need people to inform the full name of the missing person, their ID, physical traits and the clothes that person was wearing."

Petropolis, named for a former Brazilian emperor, has been a refuge for people escaping the summer heat and tourists keen to explore the so-called "Imperial City."

Its prosperity has also drawn residents from Rio's poorer regions and the population grew haphazardly, climbing mountainsides now covered with small residences packed tightly together, often in areas made more vulnerable by deforestation and inadequate drainage.

The state fire department said 25.8 centimeters (just over 10 inches) of rain fell within three hours on Tuesday -- almost as much as during the previous 30 days combined. Rio de Janeiro's Gov. Claudio Castro said in a press conference that the rains were the worst Petropolis has received since 1932.

"No one could predict rain as hard as this," Castro said. More rain was expected through the rest of the week, according to weather forecasters.

Castro added that almost 400 people were left homeless and 24 people were recovered alive. They were fortunate, and they were few.

Lisa Torres Machado, 64, said "the hand of God" spared her family from tragedy.

"A little room was left at my mom's house and she hid there with my two sisters and brother," Machado, a resident of Petropolis for three decades, told the AP. "I can't sleep. I still can't believe what's happening. We lost all our friends."

The stricken mountain region has seen similar catastrophes in recent decades, including one that caused more than 900 deaths. In the years since, Petropolis presented a plan to reduce risks of landslides, but works have advanced only slowly. The plan, presented in 2017, was based on analysis determining that 18% of the city's territory was at high risk for landslides and flooding.

Local authorities say more than 180 residents who live in at-risk areas were sheltering in schools. More equipment and manpower was expected to help rescue efforts on Thursday.

Brazil's President Jair Bolsonaro expressed solidarity while on a trip to Russia. Petropolis' city hall declared three days of mourning for the tragedy.

Southeastern Brazil has been punished with heavy rains since the start of the year, with more than 40 deaths recorded between incidents in Minas Gerais state in early January and Sao Paulo state later the same month.