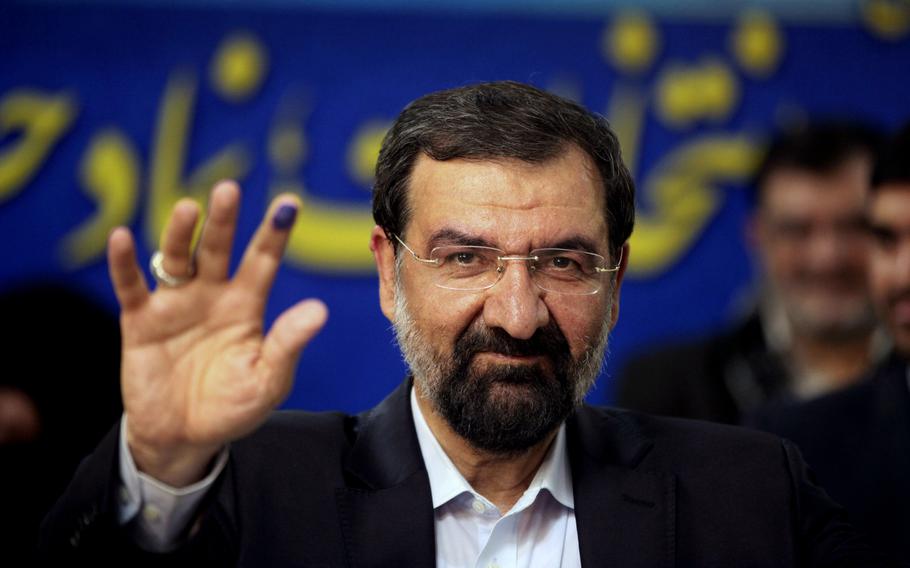 FILE - Mohsen Rezaei waves to reporters after registering as a presidential candidate, in Tehran, Iran, May 10, 2013. Argentina’s Foreign Ministry said Tuesday, Jan. 11, 2022, that the appearance of Rezaei, at the investiture of Nicaragua’s president on Monday was “an affront to Argentine justice and to the victims of the brutal terrorist attack″. Rezaei, a former leader of Iran’s paramilitary Revolutionary Guard, is wanted by Argentina on an Interpol “Red Notice” alleging he was involved in the 1994 bombing of a Jewish center in Buenos Aires that killed 85 people. (AP Photo/Vahid Salemi, File) (Vahid Salemi)

BUENOS AIRES, Argentina — The presence of a senior Iranian official at the investiture of Nicaragua's president has angered Argentina, which alleges the official was involved in the 1994 bombing of a Jewish center in Buenos Aires that killed 85 people.

Argentina's Foreign Ministry said Tuesday that the appearance of Mohsen Rezaei, the Iranian vice president for economic affairs, at the Nicaraguan ceremony on Monday was "an affront to Argentine justice and to the victims of the brutal terrorist attack" in the Argentine capital.

Rezaei, a former leader of Iran's paramilitary Revolutionary Guard, is wanted by Argentina on an Interpol "Red Notice" because of the attack. He and the Iranian government deny orchestrating it.

Nicaraguan President Daniel Ortega was sworn in for a fourth consecutive term following elections considered rigged and on a day marked by sanctions from the United States and the European Union against members of his government.

Iran is also under U.S. sanctions over its nuclear program and other issues.

The Argentine government came under criticism from the country's opposition because Argentina's ambassador, Daniel Capitanich, attended the inauguration of a president deemed to have trampled on human rights — and, additionally, for being at the same event with Rezaei.

The Argentine government was not only "being partners with dictators and human rights violators in our region," but also acting as "accomplices" to an alleged organizer of the 1994 attack in Buenos Aires, said Fulvio Pompeo, secretary of international relations of the opposition PRO party.

Rezaei is among several Iranians sought by Argentina in the bombing. Argentine prosecutors allege that senior Iranian officials entrusted the Lebanon-based militant group Hezbollah to carry it out.