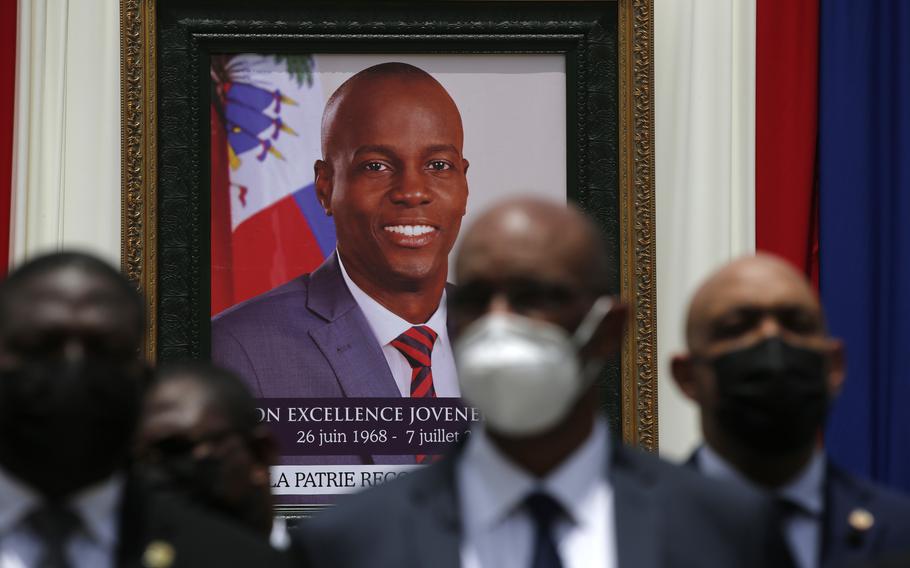 The portrait of late Haitian President Jovenel Moise hangs on a wall at the National Pantheon Museum in July 2021, during his memorial service in Port-au-Prince, Haiti. Moise was assassinated on July 7 at his home. (Odelyn Joseph/AP)

MIAMI — The U.S. government announced Tuesday that it charged one of the main suspects in the killing of Haitian president Jovenel Moïse as it unsealed a complaint that revealed federal authorities had interviewed him several months ago while he was hiding in Jamaica.

Mario Antonio Palacios Palacios, a 43-year-old former Colombian soldier, is charged with conspiracy to commit murder or kidnapping outside the United States and with providing material support resulting in death, knowing or intending that such material support would be used to prepare for or carry out the conspiracy to kill or kidnap.

He appeared at a federal court in Miami on Tuesday afternoon but did not enter a plea. Palacios, who was wearing jeans and a gray T-shirt and had his hands and feet shackled, told the judge he wanted to be appointed an attorney. After responding to questions related to his income and property, including that he owned a house in Cali, Colombia, and received a nearly $370 army pension, he was granted counsel based on limited income.

Court-appointed attorney Alfredo Izaguirre told U.S. Magistrate Judge Alicia Otazo-Reyes that he recommended Palacios stay in detention because he has no immigration status, relatives or ties to the United States. The judge ordered detention, saying he would be at risk of fleeing.

Palacios is scheduled to appear in court again on Jan. 31. Izaguirre said his client would probably plead not guilty at the preliminary hearing.

A complaint unsealed Tuesday states that Palacios spoke voluntarily with U.S. authorities in October and told them that he was hired to travel to Haiti to provide security and participate in an alleged operation to arrest the president. He said that the initial plan was for co-conspirators to don black hoodies, capture Moïse at the airport in June and take him away by plane. Palacios then said that unnamed co-conspirators told him as early as July 6, a day before the killing, about the plan to assassinate Moïse.

Palacios was arrested in Jamaica in October and was scheduled to fly to his native Colombia on Monday. However, Interpol notified Palacios during a stopover in Panama that the U.S. government was extraditing him, said Gen. Jorge Luis Vargas, director of Colombia's police.

He said that Colombia, Jamaica and the U.S. were in touch to coordinate the deportation and extradition of Palacios to the U.S.

The U.S. Department of Justice said in a press release that Palacios agreed to travel to the U.S. during his layover in Panama.

Interpol had issued a red alert for Palacios on charges including attempted murder, armed robbery and conspiracy based on a request from the Haitian government.

The office of Haiti's prime minister issued a brief statement, saying only that it wanted justice to prevail in the July 7 assassination of Moïse at his private residence. The office did not reply to additional questions including whether the government was still seeking to charge Palacios or extradite him to Haiti.

Former Haitian Prime Minister Claude Joseph said the U.S. taking custody of Palacios was a step in the right direction, but he urged local authorities to work with the U.S. to extradite him so he can face justice in Haiti.

Palacios was one of more than a dozen former Colombian soldiers accused in the slaying of Moïse. The Colombian government has said that the majority of the ex-soldiers were duped and thought they were on a legitimate mission to provide protection and that only a few knew it was a criminal mission.

More than 40 suspects have been detained, including 19 former Colombian soldiers. Among them is Palacios, who was a member of Colombia's military for 20 years.