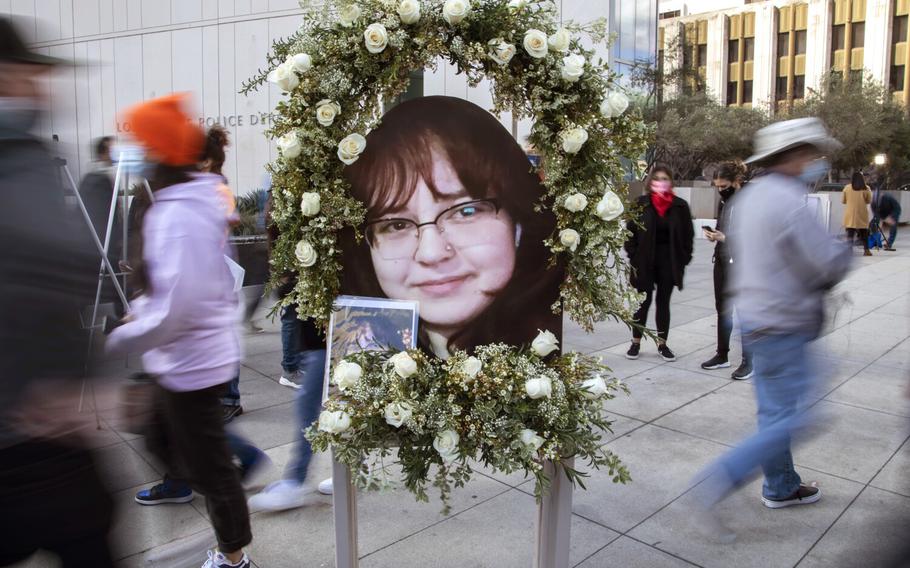 Biden called Boric on Thursday to congratulate the 35-year-old on winning his country's election in mid-December; he will be the youngest president in Chile's history. The two men talked about climate change and social justice, democracy and human rights.

In a brief statement posted on the White House website, press secretary Jen Psaki said Biden had "offered his deep condolences to the people of Chile for the tragic death" of Valentina, who was born in Santiago and died in the dressing room of a North Hollywood Burlington store, her body pierced by a police bullet.

Valentina and her mother, Soledad Peralta, had been shopping for dresses there on Dec. 23, and were in the changing room when a round fired by Officer William Dorsey Jones Jr. penetrated the wall and struck the girl. She died in her mother's arms.

"I couldn't do anything," Peralta said in Spanish during a news conference outside Los Angeles Police Department headquarters Tuesday. "Our sweet angel is gone forever."

The shy girl, who excelled at school and wanted to become an engineer and U.S. citizen, was an unseen bystander two days before Christmas when Jones fired three shots in the store at a fleeing assault suspect identified as Daniel Elena-Lopez, who had been attacking Burlington shoppers with a bike lock.

Police received multiple, conflicting 911 calls about the assaults, some saying — incorrectly — that Elena-Lopez had a gun.

A video including surveillance and body camera footage and 911 calls was released earlier this week by the LAPD. In it, Jones rushes past other police officers, one of whom shouts, "Hold up! Hold up!" Jones then stands over the body of a bleeding woman who had been attacked by Elena-Lopez as the assailant moves away at the opposite end of a shopping aisle.

Jones fires three times in a matter of seconds. And the shrieks of a woman in a nearby fitting room fill the air.

Valentina and Elena-Lopez were both pronounced dead at the scene. The LAPD and the state Department of Justice are investigating the shooting.

Jones was placed on paid administrative leave, a standard procedure after officers discharge their weapons, said Tom Saggau, a spokesman for the Los Angeles Police Protective League. Saggau said LAPD Chief Michel Moore will decide when and if Jones returns to active duty.

In the meantime, "he's trying to make sense of it," Leslie Wilcox, Jones' attorney, said in an interview Friday. "He's spending time with his family and trying to protect them from the media coverage as well as trying to take time to process the outcome."

Neither Wilcox nor Saggau would discuss the specifics of the shooting or describe Jones' mindset, noting that what the officer was thinking as he made split-second decisions in the crowded department store would be part of the investigation.

But Wilcox described Jones as "heartbroken" and said that "he can't stop thinking about it."

Jones is a patrol officer in North Hollywood. In the past, Wilcox said, he served as a community relations officer working with at-risk youth, mentoring them, helping them get tutors. She said he created his own nonprofit organization, Officers for Change, which raised money to donate toys at Christmas and fill backpacks with school supplies for elementary students at the start of the academic year.

Wilcox said Friday that it's important to her that Jones is "being supported by his department and his community." She also said it's important for the public to know that as well.

"One of the things he told me specifically about Valentina is that she's the same age as many of the kids he mentors," Wilcox said. "He tends to think of the kids he works with or coaches as his little sisters or brothers. That's what he said about her, 'She could be my little sister.'

So, of course, is Valentina's family.

Juan Pablo Orellana, Valentina's father, said during the Tuesday news conference that, when the phone rang and he was told his daughter had been shot to death by a rifle-wielding LAPD officer, "my world came tumbling down on me. I don't have words to describe what I'm going through."

The shooting has sparked outrage and spurred debate about police response in tense, crowded situations. Los Angeles City Council members have commented, along with experts on the use of force, and advocates for the Latino community.

And now, two heads of state have weighed in, Biden and Boric.

In a statement posted on Twitter, Boric acknowledged Biden's sympathy and noted that Valentina had been killed "at the hands of the United States police."

"We accompany her family in their pain," Boric continued, "and we pledge our support for justice."