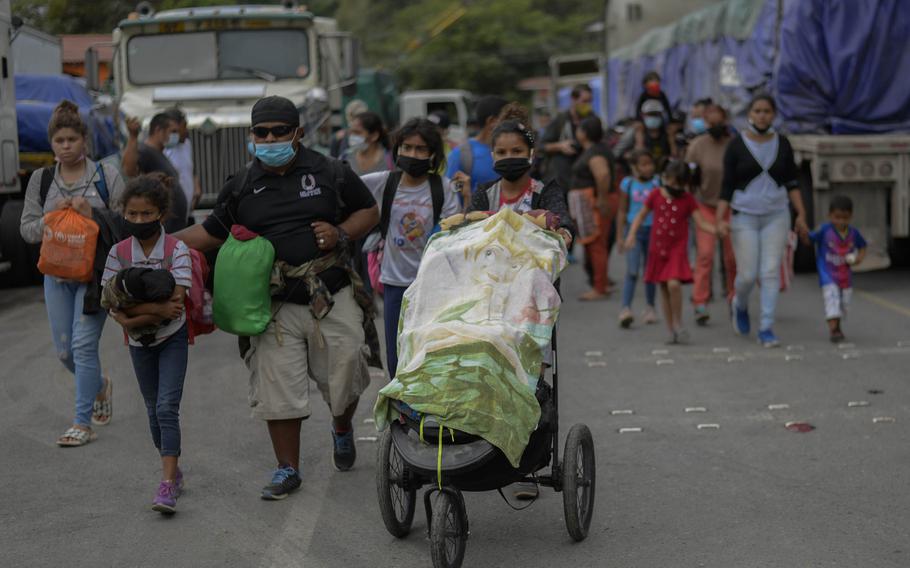 Migration of Hondurans, shown here on a voluntary return in El Florido, Guatemala, in January 2021, has become a campaign issue in the Honduran election Sunday, Nov. 28. The exodus due to crime, poverty and natural disasters has sapped Honduras of many of its best people, candidates say. (Johan Ordonez/AFP via Getty Images/TNS)

(Tribune News Service) — Hondurans are voting Sunday in presidential elections that may oust the scandal-hit ruling party and end the nation's alliance with Taiwan.

Xiomara Castro, the wife of a former president deposed in a coup, is leading in polls as she tries to end 12 years of rule by the conservative National Party. She spooked some investors by saying that capitalism hasn't worked for most Hondurans and calling for a radical overhaul of the nation's "failed neoliberal model."

Some businesses in the capital, Tegucigalpa, boarded up windows for fear of the kind of violent unrest that followed the last election in 2017, which was widely regarded as fraudulent.

Hugo Noe Pino, an economist who worked on Castro's government plan, said that the candidate would consider a plan with the International Monetary Fund if the conditions were right, and if the pace at which the deficit would be cut were not too onerous.

"People always invent these comparisons with Venezuela, Nicaragua and Cuba, but I've always said that the country we'd like to resemble is Costa Rica," Noe Pino said Friday, in an interview in Tegucigalpa.

Castro wants to tax large fortunes, introduce a new welfare payment for poor households and senior citizens, and allow the central bank to lend to the treasury in emergencies. Her rhetoric has been more moderate than in previous campaigns, and some investors are waiting to see how she'll govern if she wins, said Eurasia Group analyst Risa Grais Targow.

Honduras is one of the 15 remaining countries that has full official diplomatic relations with Taiwan rather than with the People's Republic of China. Castro floated the idea of switching to Beijing if she wins, though Noe Pino said this isn't a done deal and that local business groups have expressed concerns over the idea, which need to be taken into account.

Ruling party candidate Nasry Asfura, the mayor of the capital city and son of Palestine immigrants, is polling second. Asfura refers to himself as "Papi a la orden," Spanish for "Daddy at your service," and boasts that he doesn't use a smartphone. He promises to pave thousands of miles of roads and boost agricultural jobs, trade and tourism.

Asfura is under investigation for the embezzlement of city funds, though he says he is innocent.

Polls are open from 7 a.m. to 5 p.m. with initial results expected on Sunday evening.

One survey by a local pollster found that unemployment and corruption are voters' biggest grievances. The government of President Juan Orlando Hernandez has been plagued by scandal and accusations of ties to organized crime, especially after his brother was sentenced to life in prison in the U.S.

Hernandez said the charges were "outrageous", and based on "the false testimonies of confessed murderers."

Juan Antonio Hernandez was convicted in 2019 after a trial featuring evidence that he worked with traffickers from Colombia and Mexico to turn Honduras into a major hub for cocaine bound for the U.S. The ruling party used to be closely allied with the U.S., though Hernandez's conviction has soured this relationship.

Crime, poverty and natural disasters have made Honduras one of the main sources of migration at the U.S. southern border, which has become one of the biggest crises faced by the administration of President Joe Biden. A record 321,000 Hondurans were detained in the U.S. in the 2021 fiscal year that ended in September following back-to-back hurricanes at the end of 2019 and a stagnant economy after pandemic lockdowns. That's a 22% increase over the same period a year earlier.

The outflows of migrants have sapped Honduras of many of its best people, said Yani Rosenthal, candidate for Honduras's Liberal Party, who is polling third.

"It's a super brain drain," Rosenthal said, in an interview in the capital. "The government invests a lot of money in educating its people, and the U.S. gets the return on that investment, not Honduras."

The economy will expand 4.9% this year, after a 9% slump last year, according to a forecast from the IMF. The country exports coffee, textiles and bananas, with the U.S. as its biggest trading partner.