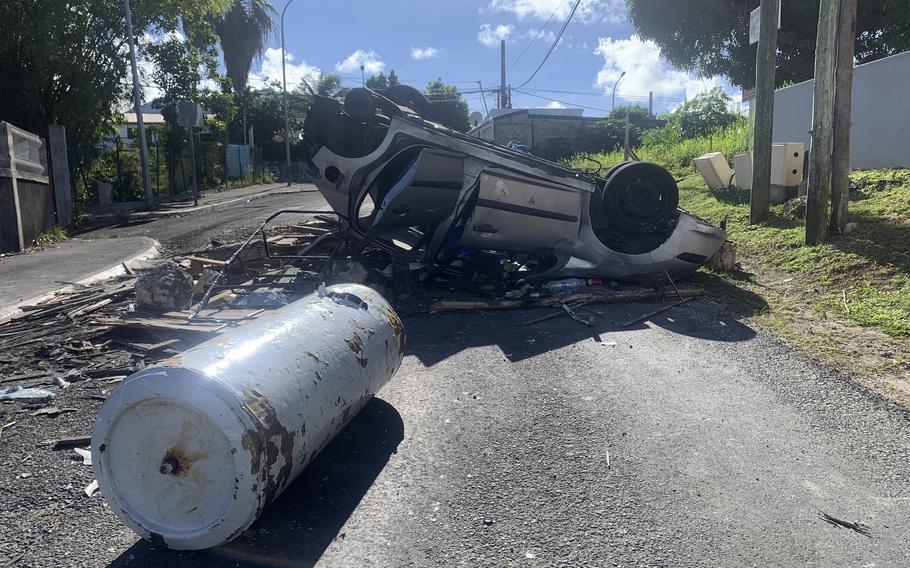 An overturned car is pictured in a s street of Le Gosier, Guadeloupe island, Sunday, Nov. 21, 2021. French authorities are sending police special forces to the Caribbean island of Guadeloupe, an overseas territory of France, as protests over COVID-19 restrictions erupted into rioting. (Elodie Soupama/AP)

LE GOSIER, Guadeloupe — Residents in the Caribbean island of Guadeloupe, an overseas territory of France, expressed dismay Sunday after protests against COVID-19 restrictions erupted into rioting and looting for the third day in a row, prompting French authorities to send in police special forces.

Road blockades by protesters made traveling across the island nearly impossible Sunday. Firefighters reported 48 interventions overnight into Sunday morning. The island of 400,000 people has one of the lowest vaccination rates in France at 33%, compared with 75% across the country.

In Pointe-a-Pitre, the island's largest urban area, clashes left three people injured, including a 80-year-old woman hit by a bullet while on her balcony. A firefighter and a police officer were also injured and several shops were looted there and in other towns. A police station in Morne-à-l'Eau was set on fire.

Guadeloupe Prefect Alexandre Rochatte, who has imposed a nightly curfew from 6 p.m. to 5 a.m., said Sunday that 38 people were arrested overnight and denounced the "organized groups now seeking to sow chaos."

Emilie Guisbert, a 47-year-old Pointe-a-Pitre resident, was sleeping in her home in the building owned by her father when it was set on fire on Thursday evening. Her friend woke her up and she just had time to dress and run out with her dogs, she told The Associated Press.

"I lost everything. Everything. I went out with my cellphone and what I was wearing," she said, adding that personal belongings of her parents, grandparents and great-grandparents were in the house. "It's 100 years of memory of a Guadeloupean family that went up in smoke in 15 minutes."

She said she did not receive help from authorities yet. "We are completely left to ourselves. I don't know who is clearing (the house). Is it us, the insurance, the city hall?"

The protests were called for by unions to denounce France's COVID-19 health pass, which is required to access restaurants and cafes, cultural venues, sport arenas and long-distance travel. Demonstrators were also protesting France's mandatory vaccinations for health care workers. In recent days, they broadened their demands to include a general salary increase, higher unemployment benefits and the hiring of more teachers.

Gregory Agapé, 30, who also lives in a Pointe-à-Pitre neighborhood where violence has repeatedly taken place, said he cannot sleep at night.

"We are always upset by the noises, bangs, all the bustle around so nights are very complicated, very short," he said.

Agapé said he has contradictory thoughts about the COVID-19 protest movement. "I'm well aware of economic, social, cultural difficulties ... but it’s quite complicated, because I think (the protests) are making Guadeloupean society even more fragile."

Jacques Bertili, a 49-year-old Le Gosier resident, said "I'm not against nor for the vaccine. But what makes me upset is looting. Because we need to work."

French Interior Minister Gerald Darmanin denounced the violence as "unacceptable" in an interview Sunday with Le Parisien newspaper. He said 50 officers from police special forces were arriving Sunday in Guadeloupe, in addition to 200 other police sent earlier.

Darmanin said following an emergency meeting Saturday in Paris that "some shots have been fired against police officers" in Guadeloupe. He also said road blockades created a "very difficult situation for a few hours" during which patients and supplies couldn't reach hospitals.

Rochatte said some electrical facilities near dams have been damaged, which has caused some power outages, and urged people not to go near downed electrical cables.