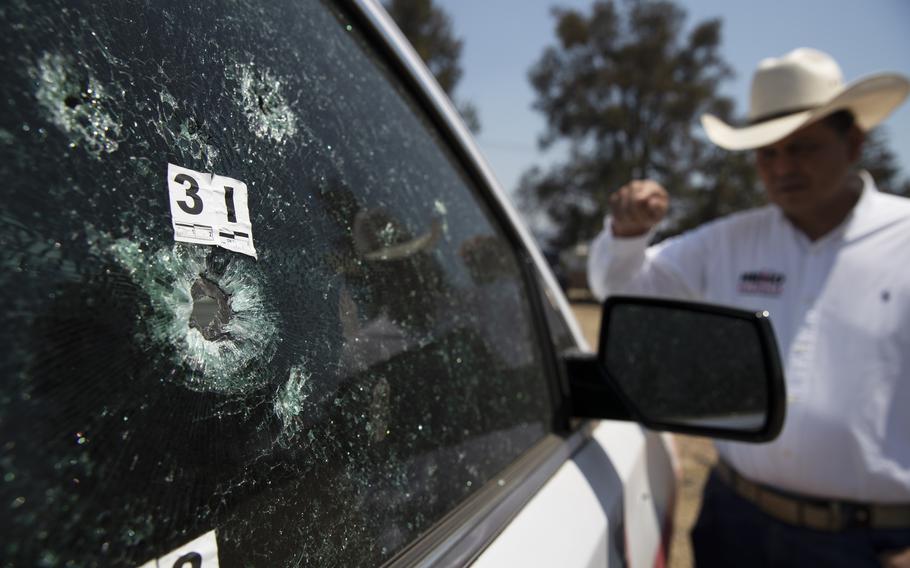 Mayoral candidate Guillermo Valencia shows in Morelia, Michoacan state, Mexico, on May 22, 2021, the bullet-riddled vehicle he was driving when armed men attacked. Gunmen near the town of Tepalcatepec, Michoacan, wounded two members of the Mexican National Guard according to reports on Wednesday, Sept. 15. (Marco Ugarte/AP)

MEXICO CITY — A clash between gunmen and National Guard troops in the Mexican state of Michoacan has left at least two guardsmen wounded, officials said Wednesday.

The shooting occurred near one of the entrances to the town of Tepalcatepec, about 350 miles west of Mexico City. Members of the army arrived in support because "various members of the National Guard found themselves surrounded," according to the Michoacan state police.

A resident of Tepalcatepec, who requested anonymity for safety reasons, said that the fighting had started Tuesday afternoon near the town dump. "You could hear the shots from home," he said. "They didn't stop all night, but right now National Guard reinforcements arrived."

The National Guard confirmed that two members were wounded in the fighting. It said the shooting broke out during a patrol.

Authorities had not said what armed group was involved, but the Jalisco New Generation cartel has been the organized crime group pushing hardest to win control of the state in recent months. Other local criminal groups have faced off with them as well, under the name United Cartels.

There are also self-defense forces that have taken up arms against the cartels. The stew of armed groups has left some towns stuck in the middle between warring groups and produced hundreds of disappearances.

"We've had daily clashes for about two weeks on the side of the dump and because of that there's a lot of garbage that you can't get rid of," the resident said. "They come that way because it's an entrance to town and they come with their monsters," he said, in reference to the trucks with home-fabricated armor that the cartels use.

Organized crime has at times cut off towns as they laid siege and attacked government forces, even with drones laden with explosives.