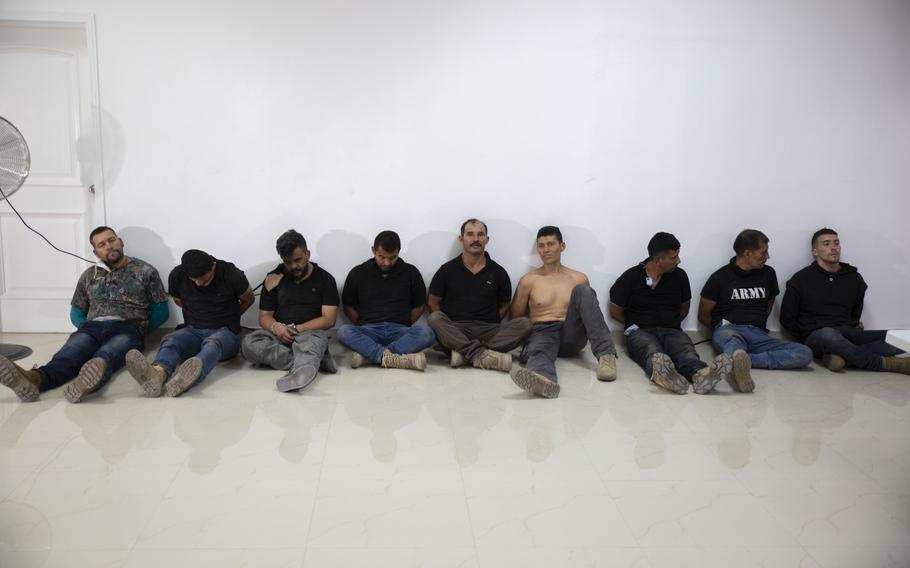 BUCARAMANGA, Colombia — As the coronavirus pandemic squeezed Colombia, the Romero family was in need of money to pay the mortgage. Mauricio Romero Medina's $790 a month pension as a retired soldier wasn't going far.

Then came a call offering a solution.

When Romero answered the phone on June 2, another veteran, Duberney Capador, offered what he said was a legal, long-term job requiring only a passport. But Romero had to make a decision fast.

"Talk about it with your family and if you are interested, see you tomorrow in Bogota, because the flight is the day after tomorrow," Romero's wife, Giovanna, told The Associated Press, recalling the conversation.

A month later, Romero and Capador were dead and 18 Colombians were reportedly in custody, accused of taking part in the assassination of Haitian President Jovenel Moïse. It's a case that dramatizes Colombia's role as a recruiting ground for the global security industry — and its murkier, mercenary corners.

Colombia's Defense Ministry says about 10,600 soldiers retire each year, many highly trained warriors forged in a decades-long battle against leftist rebels and drug trafficking cartels. Many — including a number of those involved in Haiti — have been trained by the U.S. military.

Those soldiers make up a pool of recruits for companies seeking a wide range of services — as consultants or bodyguards, in teams guarding Middle Eastern oil pipelines or as part of military-like private security in places like the United Arab Emirates and Afghanistan. The UAE paid Colombian veterans to join in the battle against Iranian-backed Houthi rebels in Yemen.

"Colombian former (soldiers) are very well trained and ... may be cheaper or more accessible than other sorts of trained, specialized manpower," said Silvana Amaya, a senior analyst focused on the Andean region for the global security firm Control Risks. "It's a good opportunity for former (soldiers) in Colombia to have a job that they're obviously prepared to do. ... So for both sides, supply and demand, we believe that it works well."

Sean McFate, a former U.S. Army paratrooper and private military contractor who has written about mercenaries, said Colombians are generally on par with U.S. and British soldiers, and are "good value" because they have combat experience, obey chain of command, work in teams and are tough.

"It's an illicit industry that operates around command language," McFate said. "The three main mercenary pillars are Spanish, English and Russian. And in the Spanish one, the Colombians are the biggest."

The wife of Francisco Uribe, who was among those arrested in the Haiti assassination, told Colombia's W Radio that the company that contracted the veterans, Florida-based CTU Security, offered the men about $2,700 a month.

That can go a long way when exchanged to Colombian pesos. It's also far below the rates of retired Green Berets or other American, British, Israeli or South African veterans.

"We are normally paid almost 50%, and sometimes up to 70% less, for being Latin American," said retired Col. John Marulanda, president of the Colombian Association of Officers of Military Forces in Retirement and an international security consultant.

He insisted their work is only "a business" and "has nothing to do with mercenarism."

Colombian President Iván Duque last week said that only a small group of the former soldiers arrested in Haiti knew it was a criminal operation. He said the others were duped and thought they were traveling for a legitimate mission to provide protection.

Relatives note the men didn't think they needed to hide. Several posted social media photos of themselves during a stop in the neighboring Dominican Republic en route to Haiti.

Jenny Guardado, an assistant professor of Latin American studies at Georgetown University, said Colombian soldiers tend to come from rural, low-income neighborhoods, where drug cartels and rebel groups also recruit, and they usually see their military service as a way to climb the social ladder.

But some struggle after they leave the military, especially those who haven't put in the 20 years of service needed for a full pension. And, she said, some have complained about not getting their full benefits.

Colombia's armed forces commander, Gen. Luis Fernando Navarro, told reporters this month that the army does not have the capacity to monitor all retired military personnel, only to guarantee social assistance, including the pension.

Key details of what happened on July 7 are unclear.

Authorities said the attackers raided the president's home before dawn yelling "DEA operation!" and wielding high-caliber weapons. A small group entered and the rest stayed outside.

A judge told the AP the attackers tied up a maid and houseboy and ransacked Moïse's office and bedroom. The president's daughter hid in her brother's bedroom and survived.

When it was over, Moïse lay sprawled on his bedroom floor. He had been shot in the forehead, chest, hip and stomach, and his left eye was gouged. His wife was wounded by gunfire.

None of the president's security detail was injured — raising questions about their role.

The attackers don't appear to have made any plan to escape. Some hid in a nearby business. Others invaded the Taiwanese Embassy. Some were found hiding in bushes by passersby and handed over to police.

At least three of the Colombians were killed, including Romero and Capador.

Romero retired from the army in December 2019 after receiving multiple decorations, specializing as a military paratrooper and combat medic and attending the Lancero School, which provides army special operations training and is similar to the U.S. Army Ranger School.

"When the soldiers retire, they are invited to join armies in other countries," Giovanna Romero told the AP. "Mauricio was no exception to the fact that if one of those opportunities arose, it could be taken, because he had the knowledge for the job."

She said her husband never told her where he was going, and she learned of his death from the news media. Now, the Colombian government has informed the family that his pension will be suspended for the duration of an administrative process.

The Moïse assassination presents a challenge for the Colombian security forces, which already were dealing with complaints about a heavy handed response to protests this year and over past allegations that soldiers sometimes killed innocent civilians and counted them as rebels slain in combat in order to boost body counts.

Colombian Vice President Marta Lucía Ramírez has said the country is ready to offer consular assistance to the detained suspects and repatriate the bodies of the deceased. A former defense minister, she defended the nation's armed forces.

"I know perfectly well that the Colombian military are never, under any circumstances, mercenaries who are going to go on duty to commit any crime anywhere," Ramírez said.