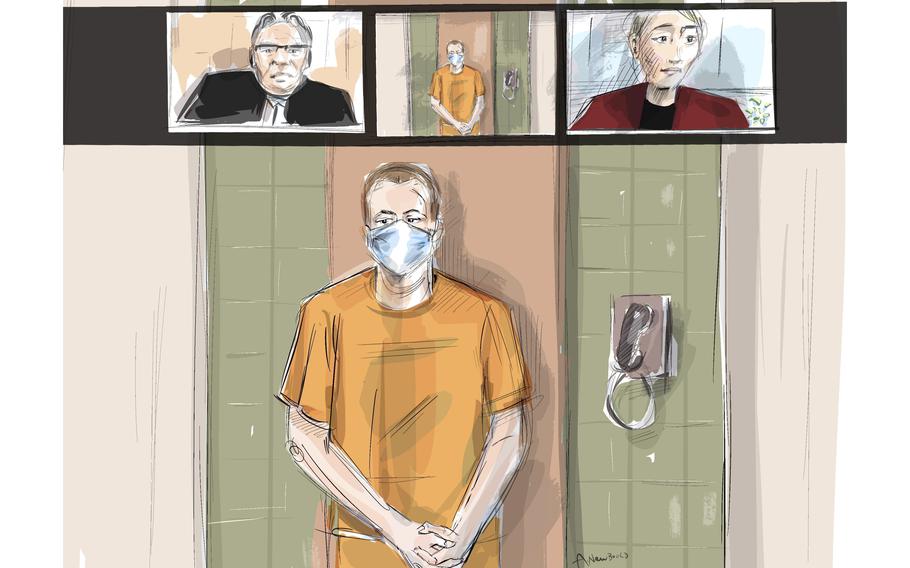 An artist's sketch depicts Nathaniel Veltman as he makes a virtual appearance in court, Thursday, June 10, 2021, in London, Ontario, as Justice of the Peace Robert Seneshen, top left, and lawyer Alayna Jay look on. Veltman, accused of deliberately running over and killing four members of a Muslim family in London, Ontario, had his case adjourned to next week. (Alexandra Newbould/The Canadian Press via AP)

LONDON, Ontario — The man accused of deliberately running over and killing four members of a Muslim family in London, Ontario, has had his case adjourned to next week.

Nathaniel Veltman made a brief virtual appearance in court Thursday to face four counts of first-degree murder and one count of attempted murder.

Veltman, 20, said he is still in the process of retaining a lawyer. He has yet to enter a plea.

Relatives have identified the dead as 46-year-old Salman Afzaal, his 44-year-old wife Madiha Salman, their 15-year-old daughter Yumna Salman and her 74-year-old grandmother, Talat Afzaal. The couple's son, Fayez, was seriously wounded but is expected to recover.

Police allege the attack was a planned and premeditated act that targeted Muslims.

Veltman is set to return to court on June 14.

The head of a local taxi company, meanwhile, said Veltman demanded a cab driver call police to arrest him minutes after the attack.

Hasan Savehilaghi, president of Yellow London Taxi, said of one the company's drivers was having a cigarette and a coffee next to his car in an empty strip mall parking lot on Sunday night when a black pickup truck came screeching to a halt directly behind his vehicle.

The man in the truck launched into a profanity-laced tirade directed at the taxi driver, said Savehilaghi, speaking on behalf of his employee, who he said was badly shaken by what happened.

"He yelled at our colleague to call police because he had killed somebody," Savehilaghi said.

It was then that the cab driver noticed heavy damage to the front of the pickup truck, as well as the presence of a lot of blood, Savehilaghi said. The cab driver called 911 and, while on the line with the dispatcher, noticed a police car going by, Savehilaghi recounted.

The taxi driver immediately sprinted after the officer and told her what he had heard from the man in the truck, the company president said. The officer and a few others came over to the truck and took the man out of the vehicle, he said.

The man who was in the pickup truck wore a military helmet and what appeared to be an armored vest, Savehilaghi said his employee recounted. Once police removed those items, the taxi driver "noticed swastika signs on the chest of (the man's) T-shirt," his employer said.

"He was laughing the entire time and he was chanting something," and asked the taxi driver to record the arrest and "make a movie of him," Savehilaghi said.

Meanwhile, the world's largest body of Muslim-majority nations, with a membership of 57 countries, condemned strongly what it described as "the heinous terrorist run-over perpetrated by an extremist" against a Muslim family in Canada.

The Organization of Islamic Cooperation called on authorities to take the necessary preventive measures to address anti-Muslim hatred, which it said is spreading in many countries where Muslims constitute a minority. In its statement issued Thursday, the OIC renewed its calls on the United Nations and other global bodies to declare March 15 a day against Islamophobia and intolerance of Muslims.