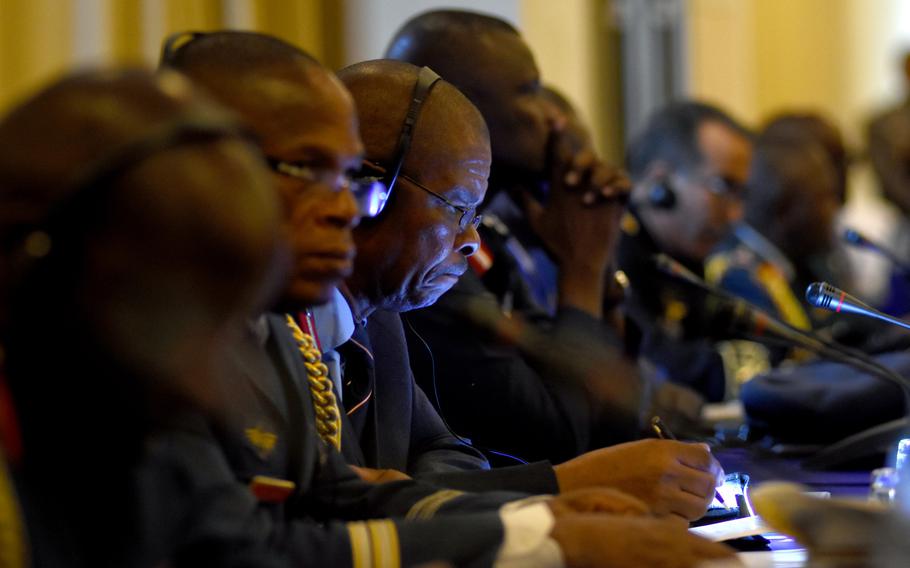 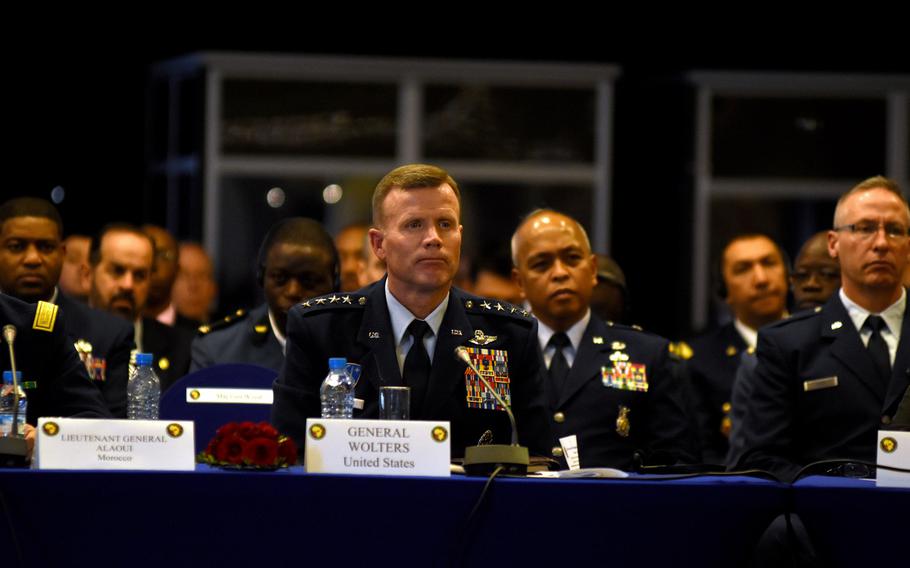 African air chiefs wait to sign the charter for the fledgling Association of Africa Air Forces during a symposium in Marrakech, Morocco this fall. The association is a unique, nonpolitical group in Africa that is striving to improve and support air operations across the continent. () 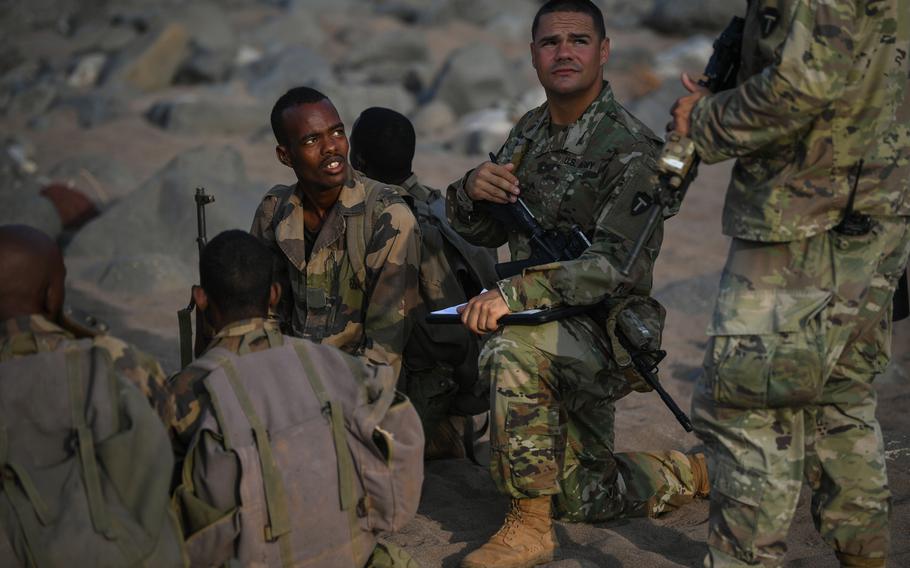 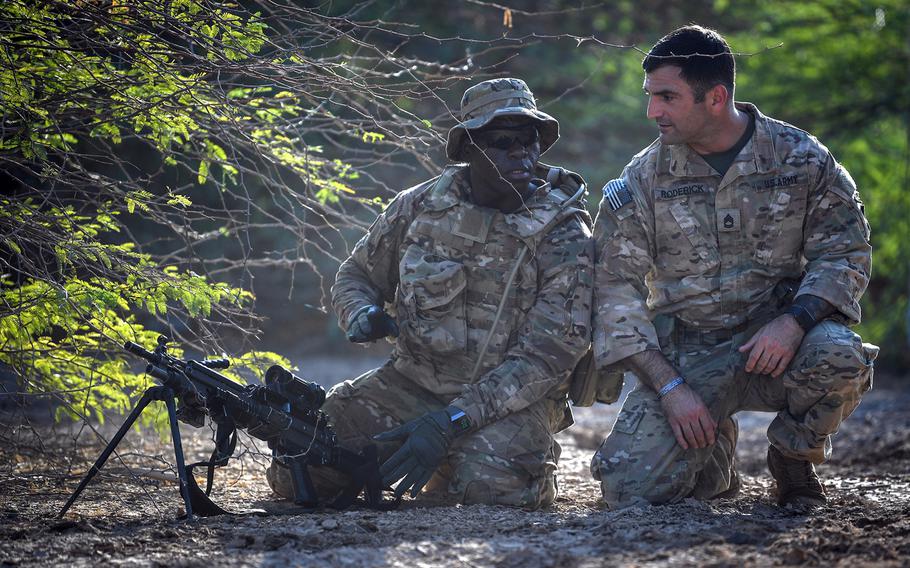 Violent extremism and other security issues continue to threaten stability in many African countries, air force officials on the continent say, despite U.S. plans to trim back Pentagon commitments and foreign aid in some areas.

This month, U.S. national security adviser John Bolton unveiled the Trump administration’s strategy in Africa, focused on countering the rapidly expanding financial and political influence of China and Russia across the continent, with efforts to curb radical Islamic terrorism — mainly through allies — taking a secondary priority.

The Pentagon had announced in the fall that it would begin scaling back special operations missions and pulling hundreds of troops from the continent, where Americans have been training, advising and fighting side-by-side with security forces in countries such as Somalia, Mali and Libya.

The move came about a year after four U.S. soldiers were killed in an ambush in Niger and reflects a broader change in U.S. defense strategy focused more on what the administration has called “great power competition.”

But security issues remain a chief concern for African defense officials who met in Morocco in October for a wide-ranging Air Force symposium meant to foster greater cooperation, weeks ahead of the Pentagon’s drawdown announcement.

Though it’s not clear whether the latest shift in Africa will affect the Air Force mission there, experts say it signals the Defense Department is downgrading the terrorist threat to U.S. interests in the region, which could chip away at support for U.S. military programs across the continent.

And analysts warn that if troop reductions aren’t done carefully, it could expand China’s and Russia’s influence in Africa — as those countries seek to fill the void — and could give terrorist organizations an opportunity to rise up.

“If the U.S. doesn’t want to cede influence in Africa over the next decade or two decades, it really does need to (think) differently about what its military has been doing in Africa over the last 10 years and what types of changes it needs to make,” said Jonathan Schroden, director of the center for stability and development at the nonprofit research group CNA in Arlington, Va.

Some of those changes could include shifting forces from counterterrorism to monitoring Chinese activities across the continent, Schroden said.

But Schroden and others cautioned any shift away from special operations missions should not be too drastic or the U.S. could risk losing some of the gains made in countering violent extremism in recent years.

“I think the concern is always if you don’t stay on top of this problem, there’s a lot of merging and shifting of territory and these threats can pop up, by their very nature. They’re very hard to track,” said Linda Robinson, a RAND Corporation senior researcher.

‘Bigger fish to fry’ The counterterrorism mission in Africa has made inroads in recent years, Schroden said, including eliminating the Islamic State group from many of its strongholds in Libya, and together with the French, doing the same to al-Qaida in Mali.

“There’s been a lot of areas of progress that you can point to, but it comes with a cost,” he said. “We’ve had to dedicate a lot more special operations forces and supporting resources to those efforts over the last … seven to eight years.”

Given the broader stresses on the special operations community, from global deployments to places such as Syria and Afghanistan, “that just adds an additional layer of stress that the community’s having a hard time bearing.”

Special operations units have suffered much of the combat fatalities in recent years and the past year has seen a series of scandals involving elite troops, including war crimes investigations.

The death in 2017 of four U.S. soldiers in a special operations mission gone awry seems to be the catalyst for the review of the “soft presence” in Africa, Schroden said, a second look, in essence, at the threat level relative to U.S. national interests.

The Pentagon concluded “we had bigger fish to fry elsewhere and so we’re going to draw down some of our capabilities in Africa,” he said.

Effect of cutbacks hard to forecast The numbers at a glance don’t appear drastic. Of about 7,200 troops operating in Africa, about 700 will be cut over the next several years, the Pentagon said.

But the effect of a 10 percent loss in personnel on the continent is hard to forecast without knowing where the cuts will be made, experts say.

“If it’s 700, no kidding special operations, that’s a pretty sizable drawdown of guys who are going out on patrol and doing direct advisory missions,” Schroden said. If the reductions come more from support personnel or headquarters units, “the operational impact may be less.”

The cutbacks are expected to mostly target troops providing tactical help to local soldiers in the western part of the continent, but details have not been publicly released.

U.S. Air Forces in Europe–Air Forces Africa officials couldn’t provide specifics, but said they were committed to continuing support there.

“At this time, we cannot speculate on the changes or impact this will have on AFAFRICA airmen or missions,” said Lt. Col. Davinia Petermann, USAFE-AFAFRICA spokeswoman, in a statement late last month.

Air Force looks to bridge gaps In the meantime, AFAFRICA continues to urge cooperation among African nations, whose air forces often have vast distances to cover with limited resources. Many struggle to maintain small fleets of helicopters and fixed-wing transport planes, and few can afford combat aircraft.

In October, Air Force and State Department leaders from Europe, Africa and Washington met in Morocco with 28 African air chiefs to discuss how their air forces could fight terrorism and violent extremists, which Air Force officials said still ranks among the biggest challenges for many African nations.

It was the eighth annual symposium AFAFRICA has organized and hosted with an African host nation, and one of the largest thus far. The air chiefs’ choice to focus on security concerns this year underscored the urgency of the challenges they face, said Gen. Tod Wolters, USAFE-AFAFRICA commander.

“Most of the air chiefs are pressed to neutralize violent extremist organizations either directly or with a neighboring nation,” he said. “They’re all galvanized to look at as many tactics, techniques and procedures that they can employ … to better neutralize that threat.”

Security threats in Africa often spill over borders, said retired general Philip Breedlove, who led USAFE-AFAFRICA for a year from 2012-2013. Since early on, the command has worked to bridge political, cultural and geographic gaps between African air forces.

“We wanted to try to get those air forces to understand that based on their fiscal challenges … and limitations of their forces, they might be better served by learning to work together,” Breedlove said.

Putting out fires Over time, AFAFRICA has seen more African nations come to the table and pledge to work with other air forces, in some cases, for the first time.

The latest symposium drew 15 new air chiefs, officials said. AFAFRICA funds the travel of the air chiefs, many of whom have said they otherwise would not have the chance to interact.

“It gives us the forum and the opportunity to interact,” said Maj. Gen. Francis Ogolla, Kenya’s air force commander. “Without that, there is no organized forum where I could meet all the other air force commanders in Africa, absolutely not.”

Kenya has agreed to host the event next year and this year signed the charter for the fledgling Association of African Air Forces, along with Cameroon and Zambia. The association was formalized in 2015 when the U.S. and Mauritania, Senegal and Ivory Coast signed the charter and has since grown to 23 members.

The goal for the nonpolitical group is to become an African-led organization to improve and support air operations across Africa, said Maj. Jason Carney, an Africa desk officer with AFAFRICA.

The annual forum has helped dispel early skepticism toward AFRICOM and brought about greater participation in the regional association, said Heidi Grant, deputy undersecretary of the Air Force for International Affairs, who has attended all but one of the symposiums. Now, she said, “there’s a thirst for it. They don’t want to meet just once a year.”

Perhaps even more significantly, the air chiefs themselves see the need for cooperation.

“When the hut of your neighbor is burning, you need to help them put out the fire,” one lieutenant colonel from Togo said at the symposium. “Otherwise, everything will burn down.”