US gunships transferred to Kenya weeks after attacks on US personnel 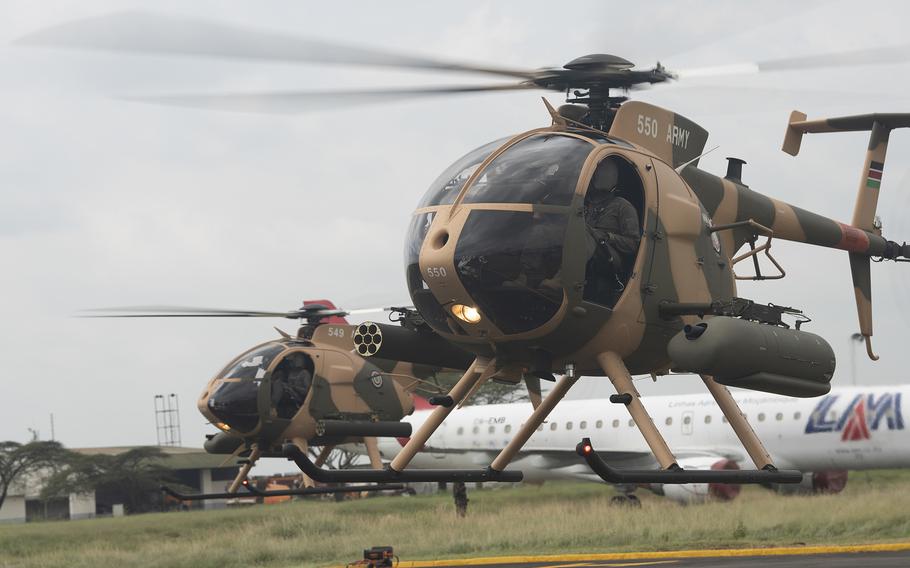 Two MD-530F Cayuse Warrior helicopters prepare to take off during a handover ceremony at Embakasi Barracks, Kenya, Jan. 23, 2020. Six of the helicopters were delivered to the Kenya Defense Force and six more are expected in the near future. (Ashley Taylor/U.S. Air Force)

STUTTGART, Germany — Six American-made attack helicopters were handed over to the Kenyan military, and the country’s top general says the delivery couldn’t have been more timely.

U.S. and Kenyan military officials touted the delivery of the MD-530F Cayuse Warrior helicopters as a step that will enhance a force faced with a persistent terrorist threat coming out of neighboring Somalia.

The helicopters are an “effective force multiplier on the battlefield,” said Gen. Samson Mwathethe, Kenya Defense Force chief, at a ceremony Thursday. “The successful delivery of these assets could not have come at a better time for us.”

The deal, several years in the works, comes after an attack earlier this month on Kenyan and U.S. forces by Somalia-based al-Shabab fighters, who launched mortars and stormed a military compound used by American troops in Kenya. Three Americans were killed in the attacks, which has prompted a U.S. Africa Command-directed investigation into what went wrong.

On Wednesday, The New York Times reported that American special operations troops at the scene of the attack were surprised by the assault and took an hour to respond, as some Kenyan forces responsible for defending the base hid in the grass.

AFRICOM on Thursday countered that the military response was speedy.

The “initial assessment indicates that a timely and effective response to the attack reduced the number of casualties and eliminated the potential for further damage,” AFRICOM said in a statement.

The clash with militants in coastal Kenya has raised questions about the role of the U.S. military in the region at a time when the Pentagon is considering shifting some forces away from Africa for other missions.

A growing number of lawmakers, however, have raised concerns about pulling back from the continent as Russia and China gain influence and terrorist groups still pose a regional threat.

“Any drawdown of our troops would be shortsighted, could cripple AFRICOM’s ability to execute its mission and, as a result, would harm national security,” Sen. James M. Inhofe, R-Okla., chairman of the Senate Armed Services Committee, said last week.

In Kenya, the U.S. has about 300 military personnel focused on training local forces and coordinating missions in Somalia.

At a ceremony at Kenya’s Embakasi Barracks in Nairobi, U.S. Army Maj. Gen. Michael D. Turello said the delivery of attack helicopters is an example of “how the U.S. remains fully committed to providing relevant and timely training and equipment to bolster the KDF capabilities.”

“A partnership with the Kenyan Defense Force is one of our most important partnerships in Africa and keystone in East Africa,” said Turello, who leads the Djibouti-based Combined Joint Task Force-Horn of Africa.

Kenya purchased the gunships through the Foreign Military Sales program and six more helicopters are expected in the near future.