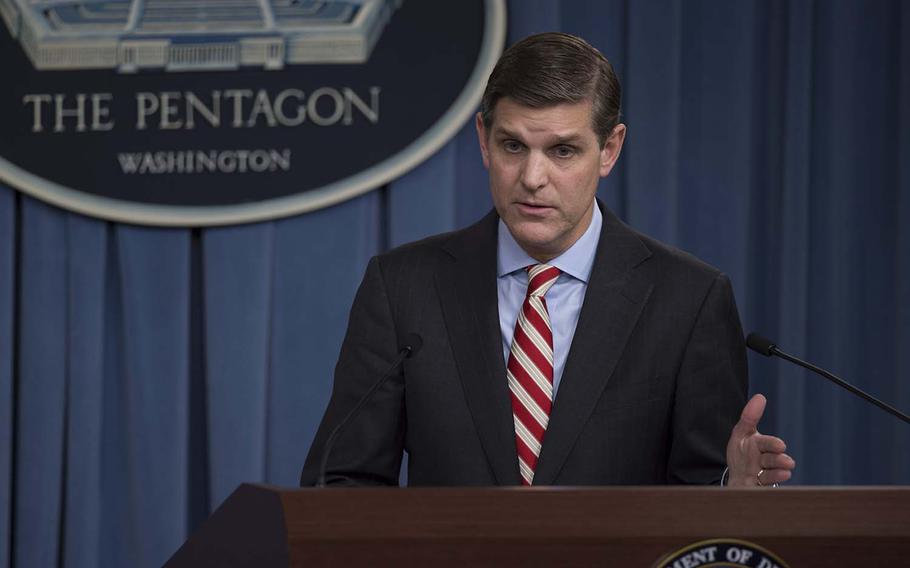 Pentagon Press Secretary Peter Cook conducts a press briefing with reporters at the Pentagon, May 26, 2016. (Adrian Cadiz/Department of Defense)

WASHINGTON — The U.S. military targeted a senior al-Shabab military commander in an airstrike last week, though it was not clear whether he was killed, the Pentagon announced Wednesday.

The May 27 strike targeted Abdullahi Haji Da’ud in south-central Somalia, said Peter Cook, the Pentagon press secretary. Da’ud had served as the al-Qaida-linked group’s security and intelligence chief and was the “principal coordinator” of the terrorist group’s attacks in Somalia, Kenyda and Uganda in recent years, he said.

“Da’ud has been responsible for the loss of many innocent lives through attacks he has planned and carried out,” Cook said in a statement. “We are confident that (his) removal … will disrupt near-term attack planning, potentially saving many innocent lives.”

The Pentagon declined to provide specifics about the attack including what U.S. forces conducted it or what aircraft was used. Cook said the United States was still assessing the strike’s success.

The U.S. military has conducted sporadic drone strikes against al-Shabab in recent years. The American strikes have targeted al-Shabab leadership and training camps and have been used to protect African troops with AMISOM. That group, which stands for African Mission in Somalia, is a team of more than 20,000 troops from about 12 countries charged with expelling al-Shabab from the country. The United States has provided small teams of special operations forces to assist AMISOM troops in Somalia.

Al-Shabab, which translates to “the youth,” was formed in the early 2000s with the intent to overthrow Somalia’s Western-backed government and implement strict Sharia, or Islamic law. It has since morphed into a jihadist organization, carrying out frequent attacks in Somalia, Kenya and Uganda. In 2012, the militant organization officially aligned with al-Qaida.

While al-Shabab has been largely driven out of most of Somalia’s major cities, including its capital Mogadishu, it continues to carry out deadly terrorist attacks there and in neighboring countries.

On Wednesday, Reuters reported al-Shabab claimed responsibility for a suicide car bombing near a Mogadishu hotel that killed at least 10 people.