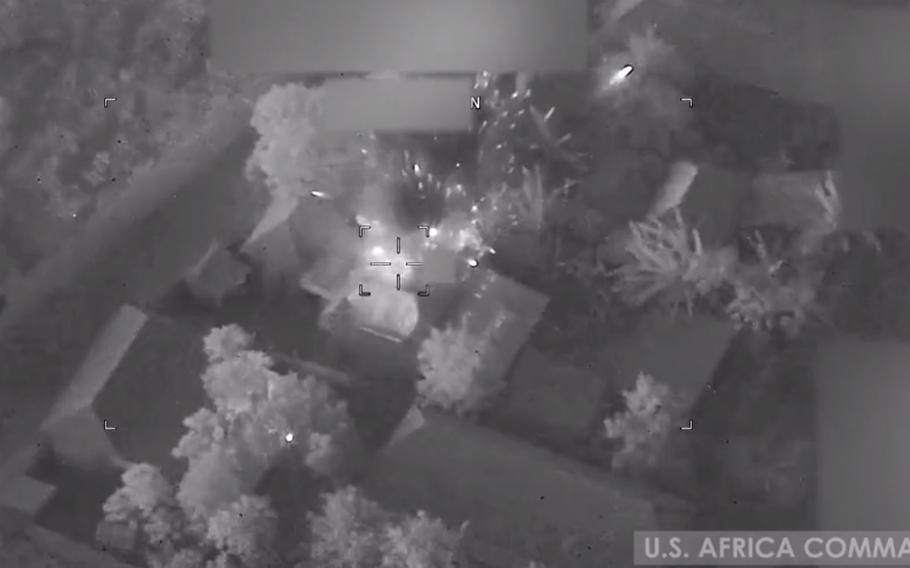 A screenshot from a video shot by U.S. Africa Command shows airstrikes on an al-Shabab compound near the town of Qunyo Barrow in Somalia on Jan. 1, 2021. Three al-Shabab militants were killed in the strikes and six buildings were destroyed, AFRICOM said in a statement. (U.S. Africa Command)

At least three members of the Somalia-based al-Shabab extremist group were killed and half a dozen buildings used by the militants were destroyed in U.S. airstrikes on New Year's Day, U.S. Africa Command said.

The twin airstrikes launched in coordination with the Somali government targeted al-Shabab compounds near the town of Qunyo Barrow, AFRICOM said in a statement released Saturday.

No civilians were killed or injured in the strikes, an initial assessment found.

The first U.S. strikes of the year against al-Shabab were carried out as American troops withdraw from Somalia, following a Dec. 4 Defense Department directive. Most of them will be relocated to countries elsewhere in East Africa, from where they can rapidly move in and out of Somalia, AFRICOM has said. The pullout is expected to be completed before President-elect Joe Biden takes office Jan. 20.

But the departure of American ground forces doesn’t mean an end to operations in Somalia, officials have said.

A U.S. drone site in neighboring Djibouti is capable of launching attacks against al-Shabab, which for years has sought to overthrow the U.S.-backed government in Mogadishu.

Last year, the U.S. conducted around 50 airstrikes against the extremist group, which has ties to al-Qaida.

“We retain the means and the will to strike the al-Shabab terrorist network when necessary to protect the region and ultimately, our own nation," he said.

AFRICOM has said it believes al-Shabab to be the most “dangerous, capable, and imminent threat” on the continent, according to a Defense Department inspector general report released Nov. 25.

Army Gen. Mark Milley, the chairman of the Joint Chiefs of Staff, warned last month at a virtual event hosted by a Washington think-tank, that, “left unattended, (al-Shabab) could conduct operations against not only U.S. interests in the region but also against the [U.S.] homeland.”

A day after the airstrikes, a suicide bombing in the Somali capital, Mogadishu, killed five people, including two Turks, officials said. Al-Shabab has claimed responsibility for the deadly attack.