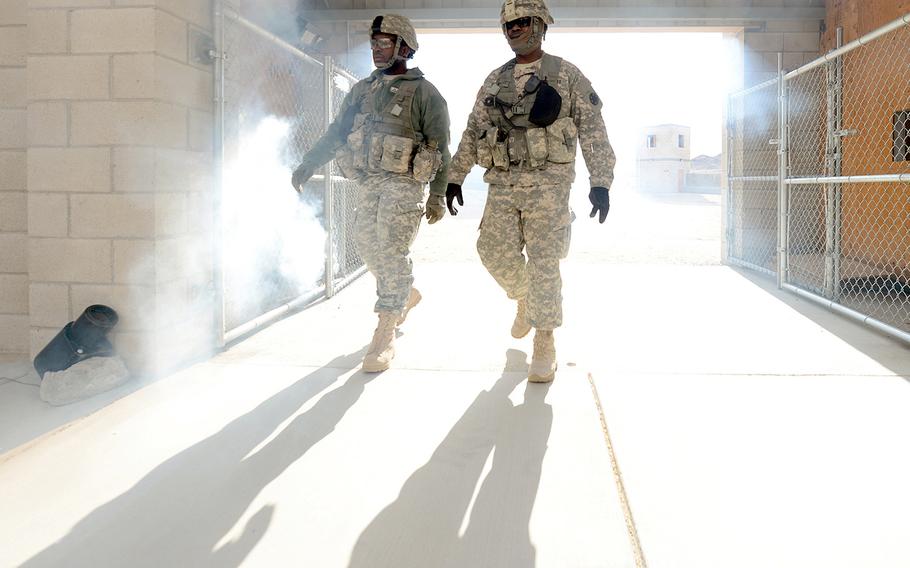 Pfc. Damien Davis, left, and Staff Sgt. James Bates, both of the Operations Group at the National Training Center in Fort Irwin, Calif., walk through a entryway obscured by smoke, Feb. 20, 2013. Their group is documenting the 2nd Brigade Combat Team, 1st Infantry Division from Fort Riley, Kansas as they train at NTC as the first brigade to be aligned with AFRICOM. (EJ Hersom/U.S. Army)

STUTTGART, Germany — A small team of U.S. troops remains on the ground in war-torn Mali as part of a 4-month-old effort presses on to support French and African forces engaged in a fight against Islamic militants, Africa Command said Wednesday.

“Today, there are about 10 U.S. military personnel providing liaison support to French and AFISMA (the African-led International Support Mission to Mali) forces,” AFRICOM spokesman Benjamin Benson said in a statement. “These are separate from the approximately 12 U.S. military personnel assigned to the U.S. Embassy. However, as we have stated before, no Americans are involved in combat operations.”

Since France’s January intervention in Mali, the U.S. has been providing a range of support for the international effort there, including information-sharing, airlift support and air refueling. “To date, we have provided more than 7.8 million pounds of fuel to French aircraft. We have also moved approximately 1,000 personnel and 1,500 tons of equipment,” Benson said.

Also since early 2013, small numbers of military personnel have been in Mali to facilitate coordination with regional allies, according to AFRICOM.

“I cannot provide details on where the personnel providing liaison support have been located due to operational security limitations,” Benson said. “The number has varied as individuals have rotated in and out of Mali since early this year. We remain committed to supporting the French and African forces as they address the security challenges in northern Mali.”

For more than a year, Mali has been in a state of political turmoil. In March 2012, a U.S.-trained mid-level Mali army officer led a coup in the nation, which previously was regarded as one of Africa’s more stable democracies. That forced AFRICOM to suspend military ties with the country, but a small number of troops always remained stationed in the country as part of the U.S. Embassy team.

Since the 2012 coup, al-Qaida in the Islamic Maghreb and other militants have taken advantage of a security vacuum in the country’s north to gain a foothold in the region. That prompted French forces to launch a surprise intervention to counter the militants, who were pushing into Mali’s south. AQIM has since been pushed out of former strongholds and France is expected to soon hand over the mission to a coalition of African armies.

U.S. concerns about AQIM operating in Mali and across northern Africa have intensified in recent months, particularly after Islamic militants stormed a gas plant in Algeria, an attack that resulted in the deaths of more than 30 workers. While most experts say AQIM doesn’t pose a direct threat to the U.S., such attacks demonstrate that Western and U.S. interests can be hit abroad.

For its part, the U.S. has stated that it will not put boots on the ground for combat missions in Mali. Still, the U.S. has upped its presence in the region. In February, about 100 combat-armed troops were deployed to the west African nation of Niger, where a drone base was set up to gather and share intelligence with French troops fighting in Mali.