NATO fires on fishing boat off Somalia after being attacked 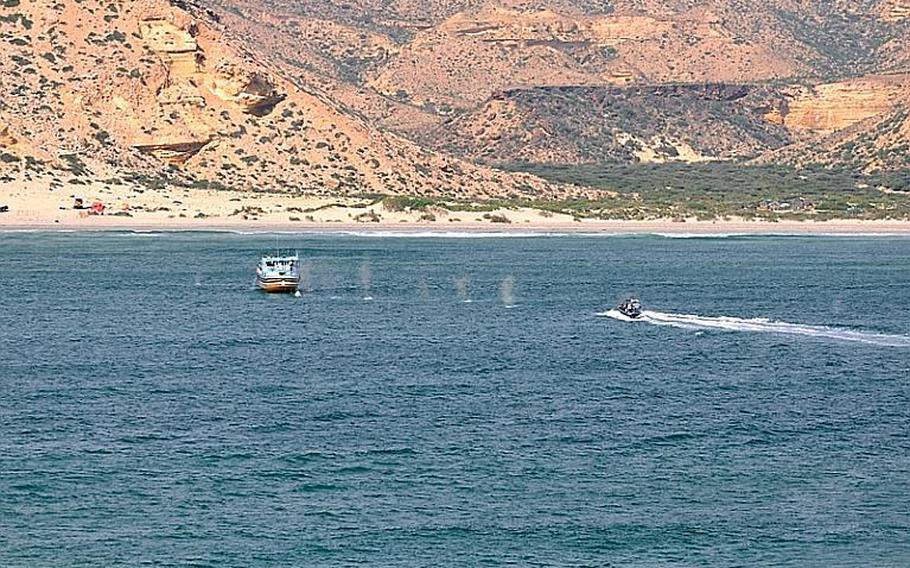 Small boat from the HNLMS Rotterdam returning fire on a suspect Dhow after coming under fire during an approach off the coast of Somalia on Oct. 24, 2012. The Rotterdam came under fire from groups of suspected pirates from shore and from the sea. (Courtesy HNLMS Rotterdam)

Small boat from the HNLMS Rotterdam returning fire on a suspect Dhow after coming under fire during an approach off the coast of Somalia on Oct. 24, 2012. The Rotterdam came under fire from groups of suspected pirates from shore and from the sea. (Courtesy HNLMS Rotterdam) 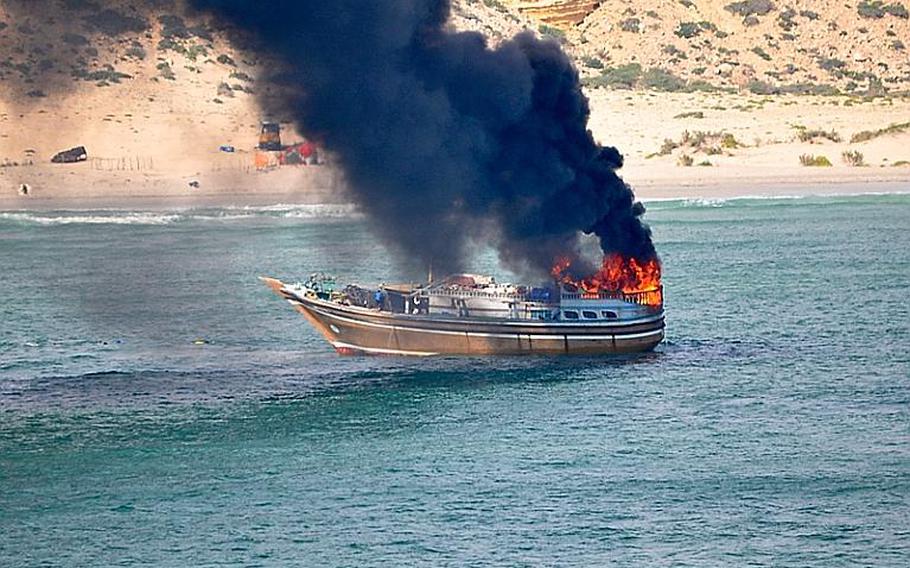 The HNLMS Rotterdam, the flagship for NATO's counter-piracy operation, fired back at a fishing boat near the Somali coast after coming under attack and the boat caught fire. (Courtesy HNLMS Rotterdam)

NAPLES, Italy &mdash; A NATO ship fired back at a fishing boat near the Somali coast Wednesday after coming under attack from multiple groups of suspected pirates firing from shore and sea in an unusually brazen display, officials said.

The crew of the HNLMS Rotterdam was preparing to inspect the dhow when fighters on the small boat and on the shore launched their attack with unknown weapons. The Rotterdam, the flagship for NATO&rsquo;s counter-piracy operation, returned fire, setting the vessel on fire. Dozens of people on board leaped into the water to escape, said NATO spokeswoman Shona Lowe.

The Rotterdam crew rushed to rescue people from the water as the attack from shore continued. At least 25 people were rescued and given medical attention. It&rsquo;s unclear if they are suspected pirates or fishermen, said Lowe.

One person was found dead, but it&rsquo;s unclear how the person died or whether he or she was a pirate or being held hostage on the dhow, Lowe said. No one on the Rotterdam was injured and the ship sustained only minor damage in the attack.

&ldquo;This shows what our personnel are up against on a daily basis. They don&rsquo;t know what they are going to face,&rdquo; Lowe said. &ldquo;Our ships very often approach fishing dhows just to see how the fishermen are, have they seen any pirates, and just to get an awareness of what&rsquo;s going on in the vicinity. &ldquo;Are the fisherman able to fish? Have they seen any pirates? So this was just a regular patrol,&rdquo; she said.

Pirates have also attacked NATO helicopters in the past, Lowe said.

&ldquo;This does not happen often, and it indicates that we are indeed impeding their operations and in doing so, pushing them to take more extreme options,&rdquo; Bekkering said in a statement.

Also on Oct. 10, the European Union&rsquo;s flagship, ITS San Giusto, captured seven suspected pirates and destroyed their boat off the Somali coast.

Somalia remains a high-risk area for seafarers, although attacks in the region are down. There were 70 Somali pirate attacks through September, compared with 199 reported incidents during the same period in 2011, according to the International Maritime Bureau, which tracks piracy attacks.

Increased patrols by international navies and the use of armed guards on private ships in recent years have helped deter pirates, said Michael Howlett, the bureau&rsquo;s deputy director.

&ldquo;Although the numbers are down, there can be no room for complacency,&rdquo; he said. &ldquo;We need to maintain the status quo.&rdquo;

In all, pirates worldwide have boarded 125 vessels, killed at least six crew members, claimed 448 hostages and completed 24 hijackings so far this year, according to the bureau.