Milley: US debating how many troops to keep in Somalia as al-Shabab remains a threat to America 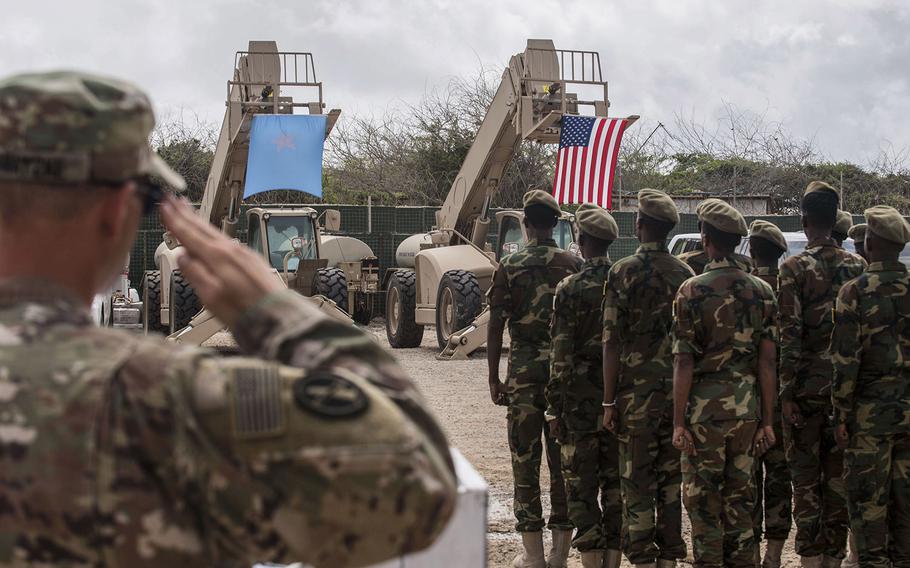 In an August, 2018 photo, Somali national army soldiers stand in formation during a logistics course graduation ceremony. Soldiers from Somalia's advanced infantry DANAB battalion spent 14 weeks training with the U.S. 10th Mountain division on the importance of logistical operation as well as the operation and maintenance of heavy equipment. (Evan Parker/DOD)

WASHINGTON — Top U.S. officials have not decided how many troops to keep in Somalia, the top U.S. general said Wednesday, warning the al-Shabab terrorist group based there remains a threat to America.

Army Gen. Mark Milley, the chairman of the Joint Chiefs of Staff, said the debate was ongoing about the positioning of some 700 U.S. troops in Somalia, confirming news reports that the White House was seeking a change in the military posture there. Milley indicated that without some troops in or near Somalia to conduct counterterrorism operations, al-Shabab could gain power.

“They do have some reach, and they could, if left unattended, conduct operations against not only U.S. interests in the region but also against the [U.S.] homeland,” Milley warned during a virtual event Wednesday hosted by the Brookings Institution, a liberal-leaning Washington think tank. “So, they require attention.”

In recent years, the United States has maintained a small presence of mostly special operations troops in Somalia to aid local forces in their fight against al-Shabab, which is affiliated with al-Qaida. The terrorist group, which seeks to overthrow the U.S.-backed Somali government and establish a hardline Islamist nation, is active across the country. It has conducted bombings and high-profile attacks in Somalia and neighboring countries, including the 2013 attack on a shopping mall in Nairobi, Kenya, that left 67 dead.

Milley said the United States was taking a “hard look” at ways to reposition troops there “to conduct counterterrorism operations with a relatively small footprint [and] relatively low cost in terms of numbers of personnel and in terms of money.”

A potential drawdown in Somalia would follow President Donald Trump’s orders last month for the U.S. military to remove some forces from Iraq and Afghanistan. Acting Defense Secretary Christopher Miller announced Nov. 17 — about a week after he assumed his temporary job — the Pentagon would remove about 2,500 troops from Afghanistan and some 500 from Iraq by Jan. 15, five days before President-elect Joe Biden is inaugurated. Biden will begin his administration with 2,500 troops in Afghanistan and 2,500 in Iraq.

Last week, Miller made a last-minute change in his plans during his first overseas trip as defense secretary to visit with troops Friday in Somalia’s capital, Mogadishu. Defense officials said it was believed the first time a defense secretary visited that nation.

It also comes after a CIA officer died of wounds suffered in a combat operation last month in Somalia. The fallen officer’s name has not been released, but Milley said he was a former Navy SEAL.

U.S. officials have said American forces typically advise and assist Somali soldiers to lead operations against al-Shabab, but U.S. troops do sometimes see combat in the country. An American service member was injured in a bomb attack by al-Shabab in September, U.S. Africa Command said at that time. Two American troops have been killed in action in Somalia in recent years. Staff Sgt. Alexander Conrad, 26, was killed in 2018 and a Navy SEAL, Senior Chief Petty Officer Kyle Milliken, 38, died in combat there in 2017.

“None of these operations are without risk,” Milley said. “But, we think we're approaching it rationally and responsibly to adjust the footprint to what is necessary in order to continue operations against the terrorists that are out there.”