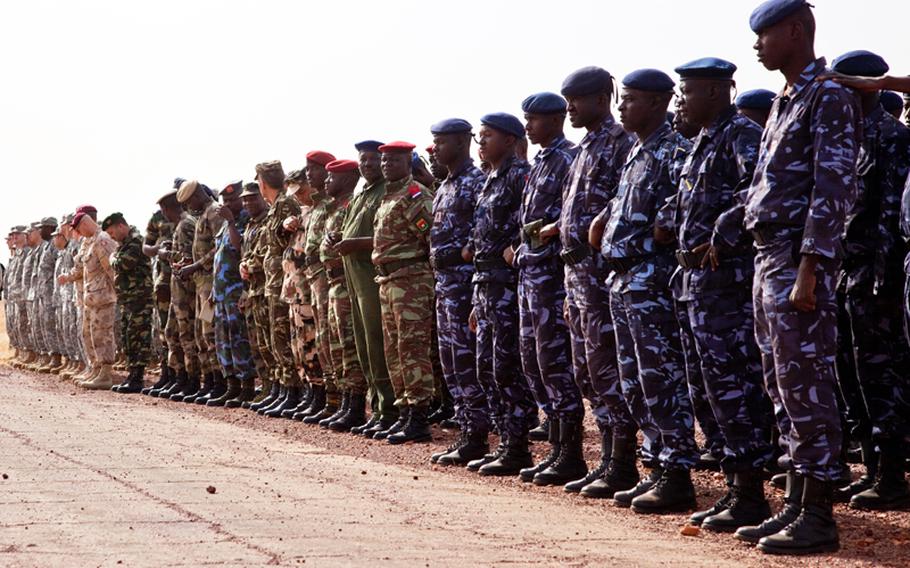 Servicemembers from the United States, Mali, Canada, Senegal, Uganda, Algeria and Tunisia attend the opening ceremony for the Atlas Accord 2012 exercise at the Mopti Airfield in Sevare, Mali, Feb. 9, 2012. The goal of Atlas Accord was to promote interoperability and aerial resupply for humanitarian aid. (Kimberly Trumbull/U.S. Army file photo)

STUTTGART, Germany — During the early days of U.S. counterterrorism efforts in Africa, Rudolph Atallah made frequent trips to northern Mali, where he roved across the rugged Sahara with the locals known as the Tuareg.

Nearly 10 years before the territory fell into the hands of Islamic militants, Atallah, who was then serving as Africa counterterrorism director for the Defense Intelligence Agency, marveled at the Tuaregs’ ability to navigate the terrain. There were no roads, no sign posts or obvious ways to get a sense of direction. And after four hours of bouncy twists and turns during a desert trip in 2004, Atallah wanted to know how the driver did it.

“I’m sitting in the front seat, it’s hot, we’re eating dust, and I ask him how he doesn’t get lost,” said Atallah, who retired from the Air Force in 2009 and now runs a security consultant firm. “The driver smiles and says, ‘You know GPS? I am TPS. Tuareg Positioning System.’ ”

To the government in Mali and its army, which the U.S. has spent millions of dollars over the years trying to turn into a capable fighting force, the Tuaregs have long been regarded as the enemy. To policymakers in the West, the Tuaregs are an ethnic group with legitimate political grievances, but who are nonetheless kept at arm’s length because of their separatist rebellion in Mali’s north.

But to Atallah, who was in Stuttgart this week to consult with Special Operations Command Africa about the unfolding crisis in Mali, the Tuaregs are an untapped resource. They are the missing piece in a U.S. strategy that so far has done little to curb the growing threat of al-Qaida-aligned militants who have taken root in the region, according to Atallah.

“In order to be a force multiplier against the Islamists, you need to integrate the secular Tuareg, the secular movement, in this intervention force in the north,” said Atallah during an interview in Stuttgart. “Get them to push out the core Islamists and get them to become the force up north that can raise the alarm anytime these guys try to turn up. The Tuareg never wanted them there in the first place.”

So far, few policymakers in the West appear to be listening as France continues to lead an intervention in Mali aimed at pushing back Islamists who have asserted control over a large portion of the country. However, within Africa Command’s secretive special operations community, Atallah says his ideas are resonating.

“SOCAF understands the problem sets very well,” said Atallah, a fluent Arabic and French speaker who has made more than 40 trips to northern Mali. “They really get it.”

In the two weeks of France’s surprise intervention, gains have been made on the battlefield. With the help of French airstrikes and fire power on the ground, Malian forces have been retaking cities. Small numbers of troops from Western African nations are on the way to help. Analysts, however, say there are many unanswered questions about the intervention and the long-term strategy for containing the terror threat.

For its part, the U.S. has provided logistical support to the French, mainly in the form of transporting troops into the country while asserting there would be no U.S. combat troops on the ground. Meanwhile, the broader U.S. policy, which has focused on intelligence-gathering operations and training militaries in the region to lead the fight against militants, remains the centerpiece of the American plan.

However, as the West wrestles with what to do next in Mali, a potential militant base for launching terror strikes across the region and possibly beyond, some experts say the U.S. needs to change course by putting less emphasis on a strategy that relies on the Malian army to do the heavy lifting. Instead, more should be done to bolster the standing of secular Tuaregs in the north, the key stakeholder in a region now dominated by Islamic militants such as al-Qaida in the Islamic Maghreb.

The Malian army, which sees the Tuaregs as its primary enemy, should be kept out of the north entirely, argues Atallah, who says the army’s history of heavy-handedness in dealing with ethnic groups in the north could drive potential allies into enemy hands.

“Everyone wants to see terrorists eliminated. Secular Tuaregs want the same thing. But they don’t want to be mistreated by Malian soldiers,” he said. “What you have now is a situation where Tuareg youth are so angry that, if left unchecked, you are forcing their hand to eventually join the wrong side, which will exacerbate the problem.”

In 2011, frustrated with their relations with the government in Bamako, secular Tuaregs founded a movement known as MNLA and rebelled against the Malian government in January 2012. By April, they had seized most of the north. They were soon pushed aside by Ansar al-Dine, an Islamist Tuareg front that aligned with al-Qaida in the Islamic Maghreb.

While secular Tuaregs say they want a part in the fight to liberate the north, they have “essentially been told to shut up and have been pushed to the side,” Atallah said.

Atallah isn’t the only one advocating a new approach in Mali.

“You have to focus your efforts on targeting your enemy,” said Soufan during a phone interview from New York, where he now runs his consultancy firm The Soufan Group. “In this case, if you isolate the Tuareg, you’re going to make them more oriented towards these (extremist) groups.”

Eventually, the French intervention will likely be handed over to regional African forces. And when that happens, the international community’s focus on supporting that regional force will serve as a distraction and prevent collaboration with the readiest fighting force, the local Tuaregs, according to Soufan.

“While the NATO allies are engaged in capacity-building, Islamic radicals will consolidate their hold on the north, and will likely launch opportunistic attacks on Western targets in the region,” according to a Soufan Group analysis on the crisis. “This will cause the terror threat from Mali to escalate, not diminish.”

For Soufan, a pragmatic strategy of “sanctuary management,” which would involve offensive strikes when needed while resisting costly attempts at nation-building, is what’s required.

“We have to be very realistic. Sanctuaries are all over the place,” Soufan said. “Are we trying to make these people democratic and instill the ideals of Jefferson and Washington? It is not going to work. First we have to eliminate threats.”

Meanwhile, Atallah says the next move by Islamic militants will be to blend into the population and launch a bloody insurgency.

“It’s going to be very painful for everybody,” he said. “For six months, Islamists have been making tunnels and preparing for the inevitable intervention. Moving into these towns to occupy them is going to be a piece of cake (for the French-led force). Then an insurgency starts and these towns become kill boxes.”

For the international community, the immediate strategy should focus on pressuring the junta government in Mali to step down while bringing the secular Tuareg into the fold in the north, according Atallah said.

“And you have to stop Malian troops from going north. Use anybody but Malian forces,” he said. “They couldn’t fight their way out of a paper bag. Despite all the training we’ve given them, this rebel force of Tuaregs last year overthrew them in two and a half months.”

While the West supports a plan to send more than 3,000 troops from Economic Organization of West African States to Mali, some experts say the roughly $500 million price tag to support the mission for a year would be better spent empowering the Tuareg.

“The Islamists would be gone in a heartbeat,” he said. “Instead we’re going to dump it on this (ECOWAS) force that is ill-prepared, all based on a half-baked plan. There’s no sense of realism.”