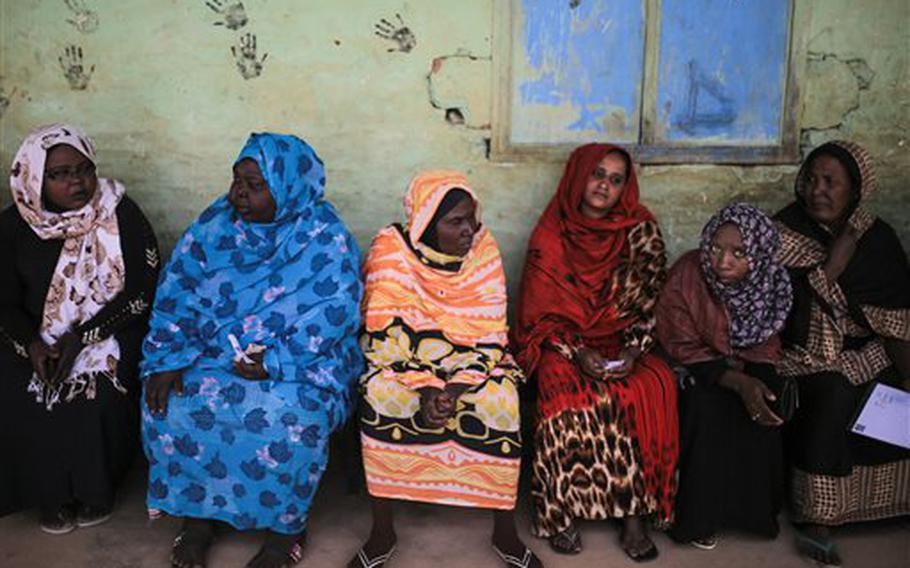 Sudanese women wait to vote outside a polling station Monday, April 13, 2015, on the first day of Sudan's presidential and legislative elections, in Izba, an impoverished neighborhood on the outskirts of Khartoum, Sudan. (Mosa'ab Elshamy/AP)

Sudanese women wait to vote outside a polling station Monday, April 13, 2015, on the first day of Sudan's presidential and legislative elections, in Izba, an impoverished neighborhood on the outskirts of Khartoum, Sudan. (Mosa'ab Elshamy/AP) 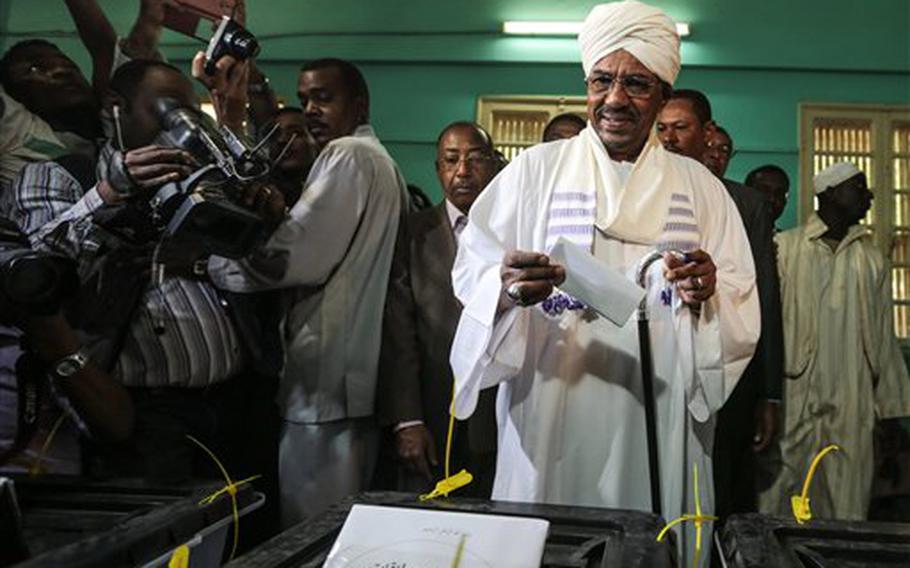 President Omar al-Bashir casts his ballot on the first day of the presidential and legislative elections in Khartoum, Sudan, Monday, April 13, 2015. Al-Bashir, who has ruled Sudan unchallenged for 25 years, is running for another term. (Mosa'ab Elshamy/AP) 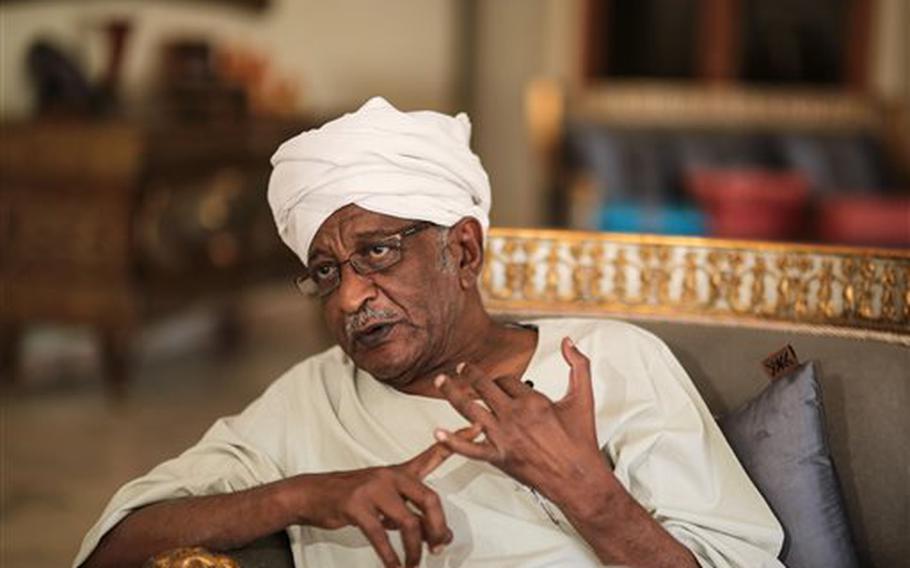 Amin Mekki Medani, a lawyer and rights advocate, speaks in his house in Khartoum, Sudan, on April 13, 2015. He successfully pushed Sudan’s opposition parties to sign onto a document pushing Sudan's president to postpone elections, form a unity government, amend the constitution and hold a free and fair vote. As a result, he was placed in solitary confinement for 15 days. (Mosa'ab Elshamy/AP)

KHARTOUM, Sudan — During a quarter-century in power, President Omar al-Bashir has succeeded in keeping an iron grip on Sudan despite repeated disasters that would have toppled many. This week's election seems certain to entrench his rule.

Sudan lost a third of its territory as South Sudan broke away. The rest of the country has been torn by multiple internal wars and battered by crippling international sanctions for alleged support of terrorism. Al-Bashir is the world's first sitting president wanted by The Hague-based International Criminal Court for crimes against humanity over atrocities in the Darfur conflict. At home poverty has swelled.

His success has come in part from a heavy security hand that has silenced dissent. Despairing of any vote breaking his grip, few Sudanese turned out for four days of elections this week, ending Thursday. But snapshots can be found of the dissent and discontent.

The impoverished neighborhood of Izba is one sign of how constant wars have shaped Khartoum. Before the 1989 coup that brought al-Bashir to power, Izba was a small community of Arab tribesmen who settled on the capital's edge. But through the 1990s and 2000s, it ballooned with Sudanese fleeing war zones around the country, particularly Darfur in the west and Kordofan on the border with the south.

The worst is during the summer rainy season, when the neighborhood floods. Residents scramble to scoop out rising water in their homes. The mud brick dissolves in the rain, damaging homes — last season, 250 houses were destroyed.

Mariam al-Mahdi's five-room home was washed away in the night last year. "In the morning, the house was gone," she told The Associated Press. It's still in ruins, and the 30-year-old's family lives in a shack nearby.

Every year, residents have to rebuild their houses. Around 80 percent of residents make only around $5 a day and are unable to afford more sturdy homes. Most men work as day laborers in construction, some of the women are tea vendors in the streets. The district has suffered from years of neglect. Public transport doesn't reach it. There's a single medical clinic but no hospitals, and few people have public health insurance.

The neighborhood got its first paved road just two months before this week's election. Residents saw it as a sop from a president who has otherwise ignored them.

Abdel-Motalib Abdullah, a resident who campaigned for candidates running against the ruling party in the election, drew an analogy:

"A hunter in red clothes dug a trap for an elephant. The elephant fell in the trap and got injured. Next day, the same hunter, but dressed in white, comes and treats the elephant's injury. This is what al-Bashir does to us."

At midnight on Dec. 6, security forces descended on the home of Sudan's most prominent human rights advocate, Amin Mekki Medani. He had just returned from the Ethiopian capital, Addis Ababa, where he met with opposition parties to work out their unified demands that al-Bashir postpone elections, form a unity government and amend the constitution.

The 76-year-old lawyer spent the next 15 days in solitary confinement, a small cell with no windows, a mattress on the floor and a neon light and air conditioning blasting non-stop.

"It was the most awful thing you can imagine," Medani told AP. "For 15 days ... I never left the room, not knowing day from night."

He was charged with forming a terrorist cell. For the next four months, he was in prison as his trial went on. Then last week, the charges against him were dropped and he and two other opposition figures were freed — a goodwill gesture before the election.

Over 25 years, al-Bashir has done away with what was once a vibrant opposition. His main tool has been the powerful security establishment. At the top stands the National Intelligence and Security Services, or NISS, which monitors the press, political parties, unions and public gatherings. Recent constitution amendments gave it even more power, changing its mandate from simple information gathering to give it authority as an outright security force.

"State security is the real ruler of this country," Medani said.

Sudan saw its biggest anti-government demonstrations in September 2013. But the protests were swiftly put down by a police crackdown that killed around 200 people.

Still, Medani insists the protests signal the emergence of a young opposition that, if joined with traditional opposition parties, could force change.

"We haven't lost the spirit," he said.

When student activist Mohammed Salah was arrested last May, he was taken to one of Khartoum's most notorious detention centers, known as the Ghost House. There, he told the AP, he received the "reception" given to newly arrived, political detainees. Over several days, he was systematically flogged, kicked, beaten, even bitten in the cheek, all while blindfolded and handcuffed. Once, he was hit so hard he temporarily lost sight in one eye.

He was held in solitary for 60 days, removed only for interrogations sometimes lasting more than 20 hours.

Salah was arrested for leading a university protest denouncing the killing of another student. He and his colleagues demanded the removal of so-called "jihadi crews," groups of armed government supporters stationed at universities to crush any protests — one tool of the government to silence dissent.

Human rights groups have frequently denounced Sudan's use of torture. Amnesty International in a report last month pointed to arrests of students, activists, rights workers and journalists from 2012-2014, some of whom faced torture and other abuses.

The arrest — and an earlier one also over protests — gave Saleh an experience in the ways of torture.

"The main concept is humiliation," he said. Detention, he said, aims to instill fear in the detainee by controlling and isolating him.

"In the end, I keep this in my mind," Salah said. "The death of an individual will not kill the cause."

When the weekly newspaper Al-Midan ran a statement by a rebel group supporting protesters demanding better services, authorities quickly confiscated the edition. The paper's chief editor, Madeha Abdullah, was hauled before prosecutors and charged with "attempting to topple the constitutional system" — a crime punishable by death.

When she heard the charges, "the prosecutor wondered why I was so cool," Abdullah recalled.

Probably because it was nothing new for Sudan's journalists. Newspapers are heavily censored, and editions are often pulled from the shelves after publication. On Feb. 14 alone, more than 15 different papers had that day's edition confiscated. Journalists never know the reason as the measures are taken without written orders.

Abdullah said security authorities instruct editors over the phone on topics to avoid — the International Criminal Court, the conflict in Darfur, economic problems or corruption. Editors who don't comply are summoned for prosecution.

From 2011 to 2013, Al-Midan — which is connected to Sudan's Communist Party — was censored or banned nearly every week, though it was still able to appear on line.

Abdullah said the stress of being banned and censored is even worse than prosecution. "We keep working. We send the paper to the print house. They stop the publication," she said. Her case has not been sent to trial and she suspects the charges will not be pursued — just left open to use against her later if needed.

The government also uses its monopoly over advertising to put a financial squeeze on papers.

"They wage different wars," Abdullah said. "There is direct war through confiscation and censorship. There is an indirect siege on the paper's resources."