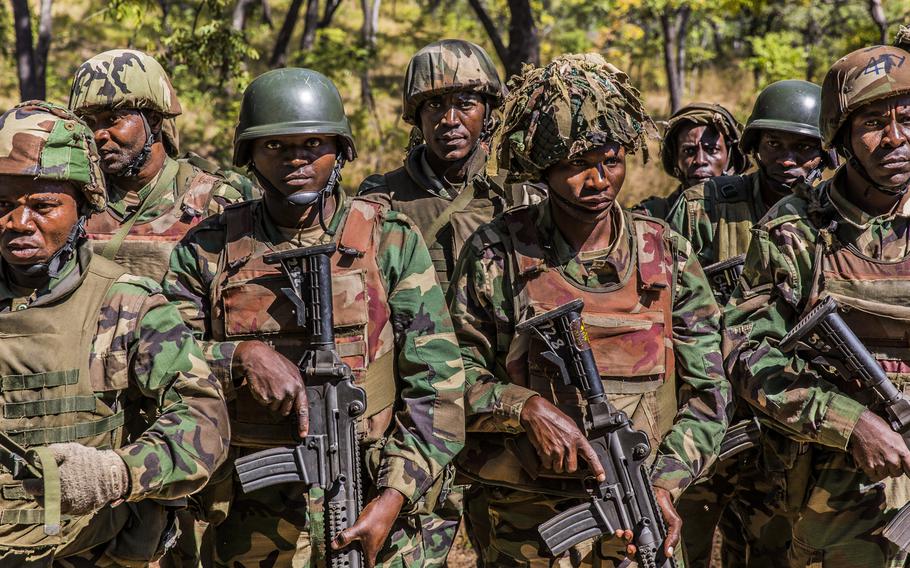 Soldiers from the Malawi Defence Force stand in formation during a graduation ceremony on May 31, 2018. U.S. Africa Command Command is looking to elevate the stature and role of non-commissioned officers and enlisted personnel in African armies. (Andrew Sinclair/U.S. Air Force)

STUTTGART, Germany — U.S. Africa Command is pursuing a new strategy to empower the enlisted ranks across the continent as it concentrates efforts on developing regional training hubs where local forces, not American mentors, will be in the lead.

This week, Colon-Lopez is meeting with more than 50 senior enlisted leaders from across Africa who traveled to Garmisch-Partenkirchen, Germany, for a three-day AFRICOM conference focused on elevating the stature and role of non-commissioned Officers and enlisted personnel.

In many militaries — not only in Africa but also in former Warsaw pact and Soviet states in Europe — NCOs still don’t have the same status they do in the U.S. Armed forces. And over the years, a centerpiece of American military training efforts with partners and allies worldwide has been to cultivate an appreciation for the potential of enlisted leadership. In the U.S. military, NCOs are regarded as the backbone to unit success.

In Africa, Colon-Lopez said there is a contingent of countries that now stands out with well-developed enlisted education programs that has led to more prominent roles for NCOs.

Liberia, Ghana, Botswana and Malawi are militaries “leading the charge,” he said.

Over the course of the next three years, the goal is to set up regional facilities or “centers of excellence,” where such countries with strong education programs can led training efforts across Africa.

“If you (AFRICOM) try to do everything for 53 countries you won’t get anything done,” he said.

Malawi, which recently set up a sergeant majors academy, already is training numerous NCOs from other countries. George Bisalomu, sergeant major of the Malawi Defense Force, said his country’s efforts at NCO education has built trust between officer and enlisted corps.

“Before it wasn’t like that because officers didn’t trust the NCOs,” said Bisalomu, who is attending the conference in Garmisch that ends Thursday. “There has been a big change.”

But one challenge AFRICOM faces is resistance among some militaries to the idea of an empowered NCO corps, which Colon-Lopez said traces to the history of colonialism on the continent.

“We always have to keep in mind we have the legacy of colonialism in a lot of countries in Africa. Particularly the Francophone countries-- enlisted empowerment is nonexistent in some of those,” he said. “And we will try and go ahead and break through that invisible barrier to have a more effective and empowered force.”

AFRICOM’s changing approach to training local troops comes as the Pentagon shifts focus to “great power” competition and countering Russia and China. As Pentagon priorities pivot from places like Africa and the Middle East, AFRICOM training efforts on the Continent could face more scrutiny and pressure to prove their worth.

In Africa, training NCOs and getting Africa’s most effective militaries to take up the training mantle is an efficient way of operating, Colon-Lopez said.

When it comes to measuring success, Colon-Lopez said countries working to build up their enlisted are proving value in how the conduct military operations.

In places like the Democratic Republic of the Congo, where international peacekeepers are a steady presence, Malawi enlisted personnel have distinguished themselves, Colon-Lopez said.

“Having the Africans being at the forefront of doing the training ... the end state will be African-led solutions to international problems,” Colon-Lopez said.