Africa Command: Piracy is on the rise off the Horn of Africa 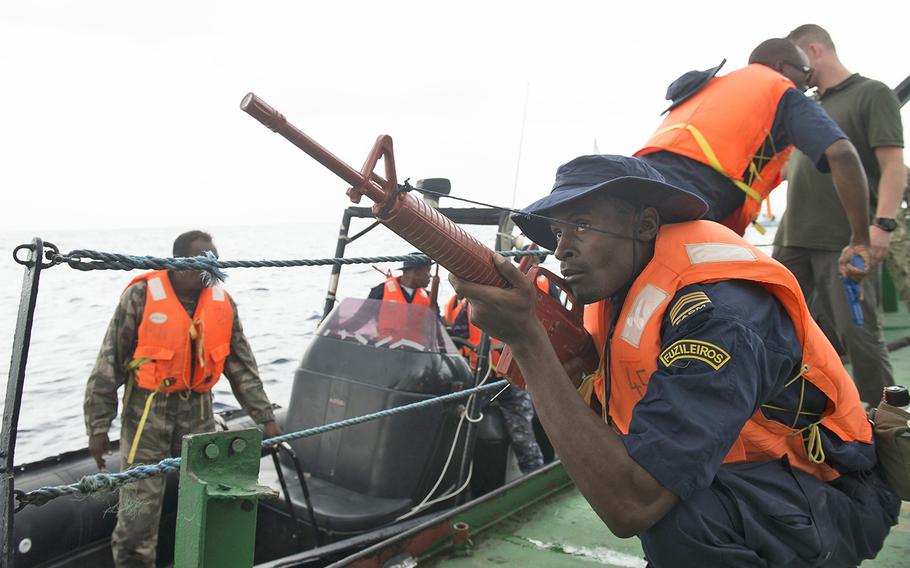 A Mozambique Marine boards the Djibouti Coast Guard tugboat Bourhan Ali Warki during Exercise Cutlass Express 2017 in the Gulf of Aden, Feb. 4, 2017. The exercise, sponsored by U.S. Africa Command and conducted by U.S. Naval Forces Africa, is designed in part to combat piracy in the AFRICOM area of responsibility. ( Robert Price/U.S. Navy)

CAMP LEMONNIER, Djibouti — The U.S. military in East Africa is monitoring a sudden return of piracy around the Horn of Africa, likely caused by deteriorating economic conditions and famine throughout the region, U.S. defense officials said Sunday.

Piracy was once rampant in the waters off the Horn of Arica, though there have been few reports in the last five years of successful hijackings in the immediate region due to heightened security efforts by the shipping industry.

He linked the uptick in piracy to the drought-caused famine in the region.

“Some of the vessels that have been taken under hijacking have had some food and some oil on them,” Waldhauser said Sunday, during a news conference alongside Defense Secretary Jim Mattis at the United States’ base in Djibouti. “… We’ve been working to ensure, with Central Command — we both share this trans-regional issue here — to ensure that the civilian shipping lines have not laxed their security to a point, where some of the reasons why piracy went down to zero here was because of the security measures the shipping industry has taken. We want to make sure the shipping industry does not relax.”

Africa Command is not alarmed yet by the uptick in hijackings, the general said.

Nonetheless, the issue has caught the attention of the U.S.-led Combined Joint Task Force-Horn of Africa at Camp Lemonnier. From 2008 to 2012, the task force focused primarily on anti-piracy action but in recent years has turned its focus to aiding East African nation’s with security operations. Camp Lemonnier is the only permanent U.S. base in Africa.

Navy Capt. Richard Rodriguez, the chief of staff for the task force, said the unit has held internal discussions about the incidents, but isn’t preparing new military responses unless Djoubitian ships or the port is directly threatened.

“We’re in monitoring mode,” he said.

Rodriguez said the reported pirate activity should be a signal to the international shipping community to maintain enhanced security measures, including armed guards, which the Pentagon had credited with the dramatic drop in piracy around the Horn of Africa.

The Navy does continuously participate in multinational efforts to deter piracy around the Horn of Africa, a defense official said. Other nations operating out of Djibouti — including Japan, Germany and China — also contribute to the mission.

The first reports of Somalian pirate activity off Africa’s Horn came in March when two ships were attacked near northern Somalia.

Reported incidents continued into early April when a cargo ship was commandeered about 130 miles off the Somalian coast and the suspected pirates routed the vessel toward a former pirate stronghold in the country’s north, according to Oceans Beyond Piracy, a nonprofit organization developed in 2010 as a response to piracy.

Pirate activity around the Horn of Africa peaked about 2010 with 182 reported incidents, including 51 successful hijackings, according to Defense Department statistics provided to Congress.

By 2013, only nine vessels reported attacks and none were successfully hijacked.

Officials said the return of piracy is not directly linked to al-Shabab’s activity in Somalia. But neutralizing the threat from the al-Qaida-linked terrorist organization would help stabilize the troubled nation and could help curb any resurgence in the activity, they said.

Waldhauser, who traveled from his headquarters in Stuttgart, Germany to meet with Mattis at Camp Lemonnier, was granted new offensive strike authorities by the White House to target the terrorist group in late March.

The authorities allow commanders in the region to strike al-Shabab without President Donald Trump’s direct authorization. Previously, commanders were only authorized to target the militants when American or African security partners were directly threatened.

Waldhauser said Sunday that the new authorities had not yet been used.

The new strike capabilities have been cleared by Somalia’s central government, and the two nations are working bilaterally to begin using them, he said.

“We are working very hard to develop the intelligence and work with the political framework we now have in Somalia,” Waldhauser said. “[The Somali government is] supportive of our efforts, and we look forward to being able to use those authorities at the appropriate time.”

Mattis, who has been traveling this week through the Middle East and North Africa, met with top Djiboutian leaders, including President Ismail Omar Guelleh, during his visit. He described his meeting with Guellah as “very good” and said the pair discussed the necessity of their partnership to ensure the strategic waterways from the Gulf of Aden into the Red Sea remain accessible to commercial and military vessels, especially as more nations — such as China, which is building its first non-domestic military base in Djibouti just miles from Camp Lemonnier — move into the region.

“International law is critical to keeping the waterways open,” Mattis said. “And it’s very important we maintain the same degree of cooperation in that regard in the future as other countries come in.”