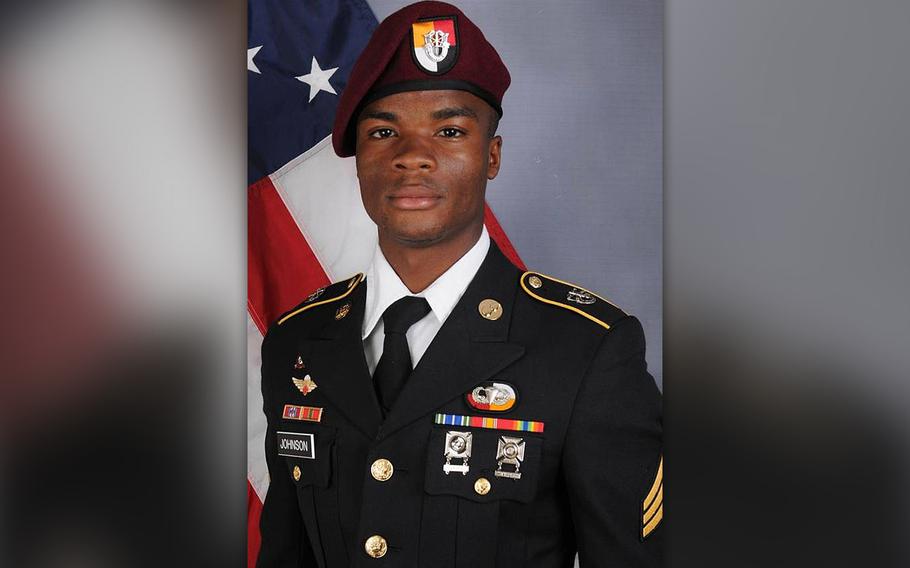 Sgt. La David Johnson was one of four U.S. soldiers killed in an ambush by Islamist militants in Niger on October 2017. (U.S. Army photo)

Investigators found human remains Nov. 12 during an examination of the ambush site outside the remote village of Tongo Tongo near Niger’s border with Mali, Dana White, a spokeswoman for the Pentagon, said in a prepared statement. A military medical examiner later determined the remains belonged to Army Sgt. La David Johnson, she said.

Johnson’s body was found two days after the Oct. 4 attack on the convoy of American and Nigerien forces by Islamic State-linked militants. The Pentagon has declined to publicly answer questions about how Johnson became separated from the other soldiers during the attack or whether he was captured at some point by enemy fighters. Officials have declined to confirm reports Johnson’s body was found tied or handcuffed and that he had been executed.

Johnson’s family has been critical of the handling of the soldier’s death by President Donald Trump’s administration. His wife, Myeisha Johnson, has said the military advised her not to view her husband’s remains before his funeral, which took place Oct. 23.

White and other top Pentagon officials have cited the ongoing combined probe into the attack by U.S. Africa Command and the FBI in declining to answer questions. The investigation is expected to be completed by January.

“The department continues to conduct a detailed and thorough investigation into the deaths of Staff Sgt. Bryan C. Black, Staff Sgt. Jeremiah W. Johnson, Staff Sgt. Dustin M. Wright and Sgt. La David T. Johnson,” White’s statement reads. “We extend our deepest condolences to all of the families of the fallen.”

The roughly 40-person U.S.-Nigerien patrol, which included 12 U.S. soldiers, came under attack by about 50 ISIS fighters as the unit was returning to its camp. The patrol had left the Nigerien capital of Niamey on Oct. 3 to meet with local leaders in Tongo Tongo.

Black, Jeremiah Johnson and Wright were killed alongside six Nigerien soldiers during the Oct. 4 firefight, according to the Pentagon. It remains unclear exactly when La David Johnson was killed.

American, Nigerien and French forces launched a massive search operation for the soldier once it was realized he was missing. The Pentagon has said Nigerien forces found La David Johnson’s body Oct. 6 and transferred it to the U.S. military.

There are about 8,000 American troops in Niger, where the United States is building a drone base and employs special operators to train and assist Nigerien troops to conducted counterterrorism operations in the country.