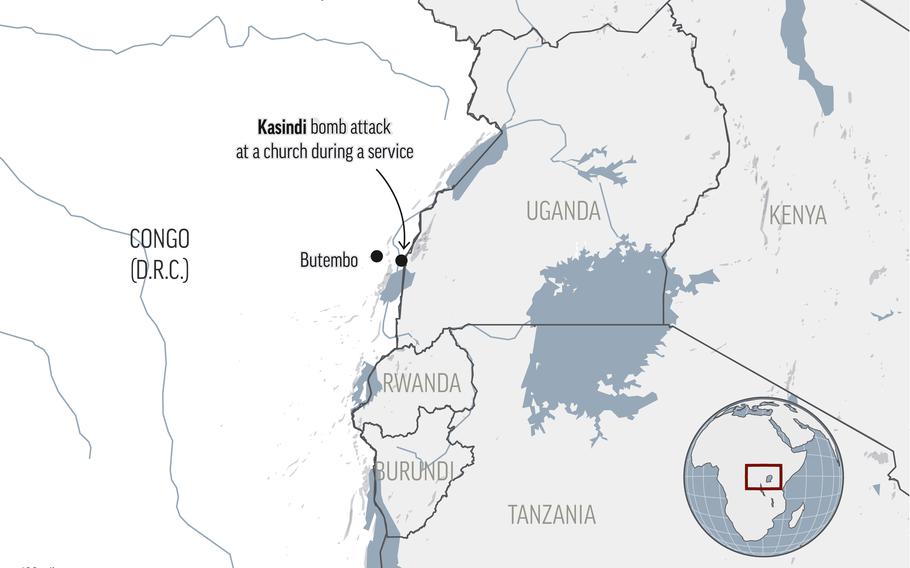 A suspected extremist attack at a church in eastern Congo killed at least 10 people and wounded more than three dozen, according to the country’s army. (Associated Press)

KASINDI, Congo — Islamic extremists claimed responsibility for a bombing of a church in eastern Congo as authorities said Monday that the toll from Sunday's attack had risen to at least 14 dead.

The Islamic State group and its Aamaq news outlet issued statements saying that its militants had planted an explosive device inside the Pentecostal church in Kasindi and detonated it while people were praying.

"Let the Congolese forces know that their continued attacks on the Mujahideen will only bring them more failure and losses," the group said in its statement.

The extremists claimed the bomb killed 20 Christians. Congolese authorities put the toll Monday at 14 dead and at least 63 wounded.

The injured were evacuated to Beni General Hospital by the U.N. peacekeeping mission known as MONUSCO, authorities said.

Violence has wracked eastern Congo for decades as more than 120 armed groups and self-defense militias fight for land and power. Nearly 6 million people are internally displaced, and hundreds of thousands are facing extreme food insecurity, according to the U.N.

Fighters with the Allied Democratic Forces, a rebel organization which is believed to have links to the the Islamic State group, have carried out several attacks in Kasindi, which is located on the border with Uganda.

Troops from Uganda's army have deployed to eastern Congo to try to stem the violence, but the attacks have increased and spread. ADF attacks since April have killed at least 370 civilians and involved the abduction of several hundred more, a report by the United Nations last month said.