EU calls on Ethiopia to reconnect Tigray region to the world 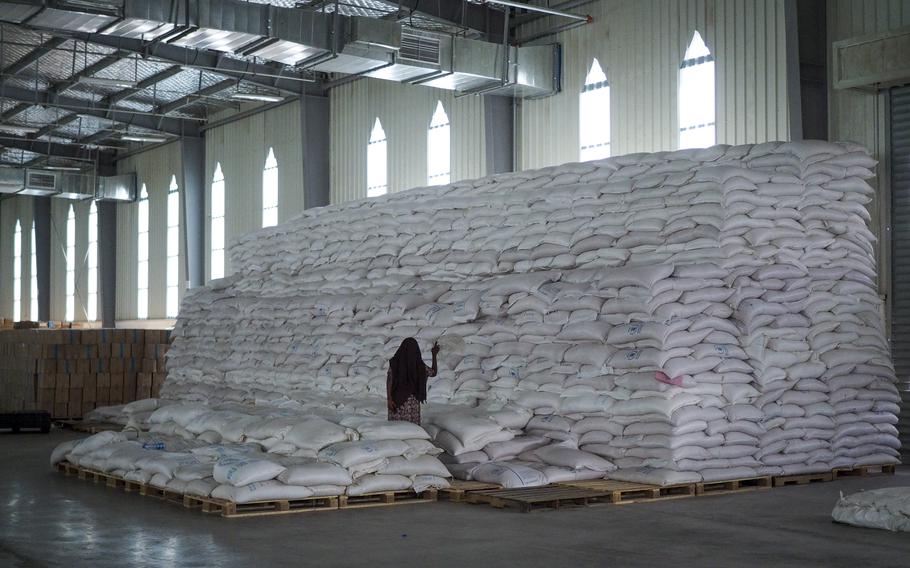 A worker walks next to a pile of sacks of food earmarked for the Tigray and Afar regions in a warehouse of the World Food Programme (WFP) in Semera, the regional capital for the Afar region, in Ethiopia on Feb. 21, 2022. The European Union said Tuesday, June 21, 2022 that Ethiopia's government must reconnect its northern Tigray region to the world as a yearlong partial blockade has left food aid for almost 1 million hungry people stuck in warehouses without the fuel to deliver it. (AP Photo)

ADDIS ABABA, Ethiopia — The European Union says Ethiopia's government must reconnect its northern Tigray region to the world as a yearlong partial blockade has left food aid for almost 1 million hungry people stuck in warehouses without the fuel to deliver it.

Janez Lenarcic, the EU commissioner for crisis management, told reporters on Tuesday that the recent increase in aid convoys arriving in Tigray was a positive development but added that "more needs to be done" before the EU normalizes relations with Africa's second-most populous country with 115 million people.

"I do not see the rationale for keeping the blockade of banking services, electricity and telecommunications in place," Lenarcic said, adding that the "partial blockade" of the Tigray region is hampering humanitarian efforts while 5.2 million people need aid after 19 months of conflict.

Tigray has been mostly cut off from the rest of Ethiopia after Tigray forces re-captured the regional capital a year ago and federal forces withdrew. A truce declared by the government in March has led to a significant increase in aid reaching Tigray by road after months of deprivation.

Lenarcic called on Ethiopia's government to lift restrictions on fuel and cash entering Tigray and said "monitoring mechanisms" could be put in place to allay government fears that Tigray forces might divert fuel for military purposes.

The United Nations this month said enough food to feed 950,000 people is currently stuck in warehouses in the regional capital, Mekele, because there is not enough fuel to distribute it within Tigray after several fuel tankers were refused access to the region.

"We have a situation where the warehouses are full, but the aid cannot get out into the countryside where needs are highest," Lenarcic said, and noted that many people in Tigray depend entirely on such aid because they cannot access money in their bank accounts.

Last year, amid reports of human rights abuses in the conflict, the EU suspended budgetary support for Ethiopia worth 88 million euros ($107 million).

Ethiopian Prime Minister Abiy Ahmed this month announced the formation of a committee to handle negotiations with the Tigray forces, who were declared a terrorist group by the government last year.

"I do believe it should be possible for both sides to come to an agreement soon," Lenarcic said. "It is urgent this happens."