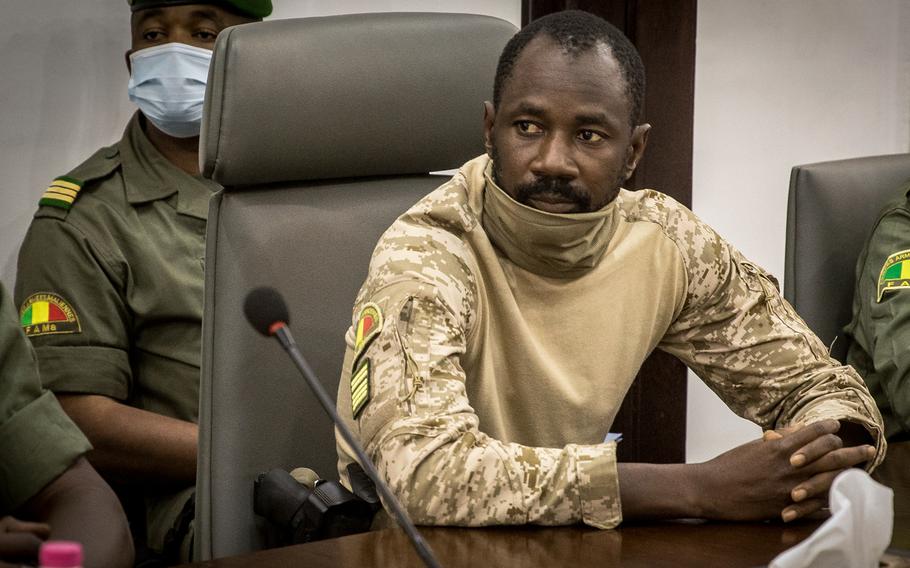 Col. Assimi Goita meets with a high-level delegation from the West African regional bloc known as ECOWAS, at the Ministry of Defense in Bamako, Mali, Aug. 22, 2020. (AP)

UNITED NATIONS — The United Nations chief urged Mali’s military leaders on Thursday to accelerate the transition to democracy, expressing “great concern” at their recent announcement delaying next month’s elections until 2026.

Secretary-General Antonio Guterres told reporters “it is absolutely essential that the Malian government presents an acceptable calendar from the point of view of the elections.”

Guterres said he spoke to the presidents of Ghana, Senegal and Nigeria, the foreign minister of Algeria and the president of the African Union Commission, Moussa Faki Mahamat, and hopes to be in touch soon with the Malian government about the election delay.

Ghana heads the West African regional bloc ECOWAS which responded Sunday to President Assimi Goita’s announcement of the delayed elections by imposing new sanctions on Mali, suspending most commerce and financial aid, and closing land and air borders with other members of ECOWAS. It also activated the bloc’s standby force, saying it “will have to be ready for any eventuality.”

Guterres said he is working with ECOWAS and the AU “to create the conditions that can allow the government of Mali to adopt a reasonable and acceptable position to accelerate a transition that has already lasted for a long time, and to restore normal relations between this state and the international community, and ECOWAS in particular.”

Mali has struggled to contain an Islamic extremist insurgency since 2012. Extremist rebels were forced from power in Mali’s northern cities with the help of a French-led military operation, but they regrouped in the desert and began launching attacks on the Malian army and its allies. Insecurity has worsened with attacks on civilians and U.N. peacekeepers.

In August 2020, Malian President Boubacar Ibrahim Keita was overthrown in a coup that included Goita, then an army colonel. Last June, Goita was sworn in as president of a transitional government after carrying out his second coup in nine months. The junta initially had agreed to hold a new election in late February but the military leadership said earlier this month it was delaying the election until 2026 because of deepening insecurity across the country, which will give Goita four more years in power.

Goita urged ECOWAS to reconsider the sanctions and said he is open to cooperation with the regional bloc.

Guterres noted that ECOWAS has said if Mali’s government presents an acceptable election timetable and takes steps in that direction this can lead to “a gradual lifting of sanctions.”