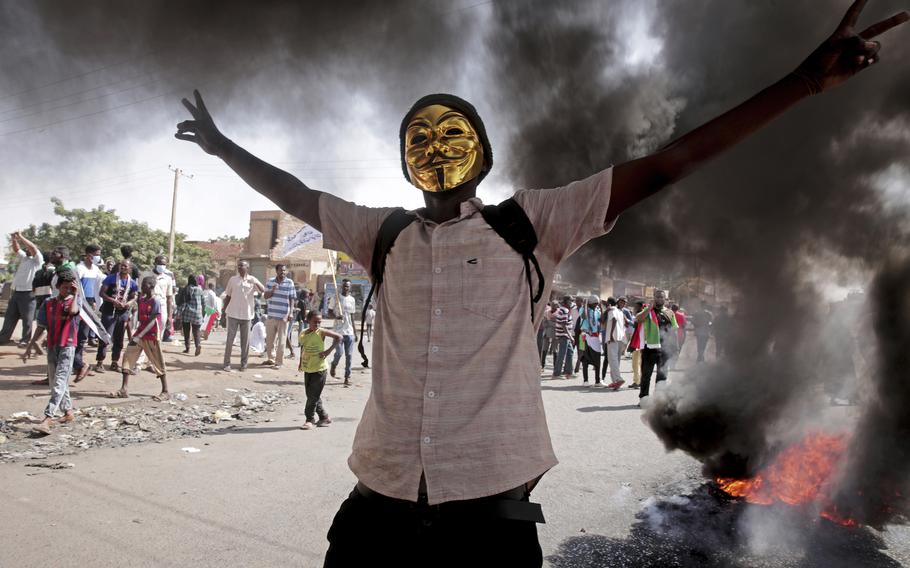 A man flashes the victory sign during a protest to denounce the October 2021 military coup, in Khartoum, Sudan, Sunday, Jan. 9, 2022. (Marwan Ali/AP)

CAIRO — A leading Sudanese protest group on Sunday rejected a United Nations initiative to hold talks with the military aimed at restoring the country’s democratic transition following an October coup. At least one demonstrator, meanwhile, was killed when security forces violently broke up anti-coup protests in the capital, activists said.

The move is a blow to international efforts seeking an end to Sudan's political deadlock, and suggests that relentless street protests are likely to continue. Over 60 people have been killed since the military takeover.

The U.N. offer Saturday came a week after embattled Prime Minister Abdalla Hamdok resigned, citing a failure to reach compromise between the generals and the pro-democracy movement.

The Oct. 25 coup scuttled hopes of a peaceful transition, over two years after a popular uprising forced the military overthrow of longtime autocrat Omar al-Bashir and his Islamist government.

In a statement, the Sudanese Professionals' Association, which led the uprising against al-Bashir, said the "only way" out of the ongoing crisis is through the removal of the generals from power. It seeks a fully civilian government to lead the transition, underlined by the motto "No negotiations, no compromise, no power-sharing" with the military.

The SPA has been the backbone of anti-coup protests, alongside youth groups known as the Resistance Committees.

Protesters continued their marches in Khartoum on Sunday, with security forces firing tear gas to disperse demonstrators near the presidential palace, according to activist Nazim Sirag.

Security forces also opened fire on protesters in the capital's Bahri district. At least one protester was killed and another one suffered a gunshot in his leg, Sirag said.

Healthcare workers, who joined Sunday's protests, demanded the government guarantee security at hospitals, which have been repeatedly stormed by security forces during demonstrations.

A young protester, meanwhile, died in the hospital Sunday from his injuries, the Sudan Doctors Committee said. Alaa el-din Adel, 17, was shot in the neck during Thursday's protests in Khartoum's twin city of Omdurman. His killing raised the death toll since the coup to at least 61, according to the doctors committee.

Volker Perthes, the U.N. envoy for Sudan, said that the talks would be inclusive to try to reach a "sustainable path forward towards democracy and peace" in the country.

"It is time to end the violence and enter into a constructive process. This process will be inclusive," he said.

Though the envoy has yet to offer details of the U.N.-facilitated political process, the SPA's rejection deals a blow to his efforts to bring the generals and the pro-democracy movement to the negotiating table.

Perthes is planning to offer more details in a news conference in Khartoum on Monday.

The SPA said Perthes' moves have been "controversial," citing his efforts in supporting a deal Hamdok struck with the military in November that reinstated him but sidelined the pro-democracy movement.

"He has to listen carefully to the aims of our proud people and their revolutionary forces in establishing a fully civilian, national rule," it said.

The United States, the United Kingdom, Saudi Arabia and the United Arab Emirates urged all Sudanese players to "seize this opportunity to restore the country's transition to civilian democracy" in accordance with the 2019 constructional document that established the transitional government.

At the United Nations, five countries – the U.S., U.K., Albania, France and Norway – requested a U.N. Security Council meeting on the situation in Sudan. Diplomats said it will likely take place Tuesday or Wednesday.